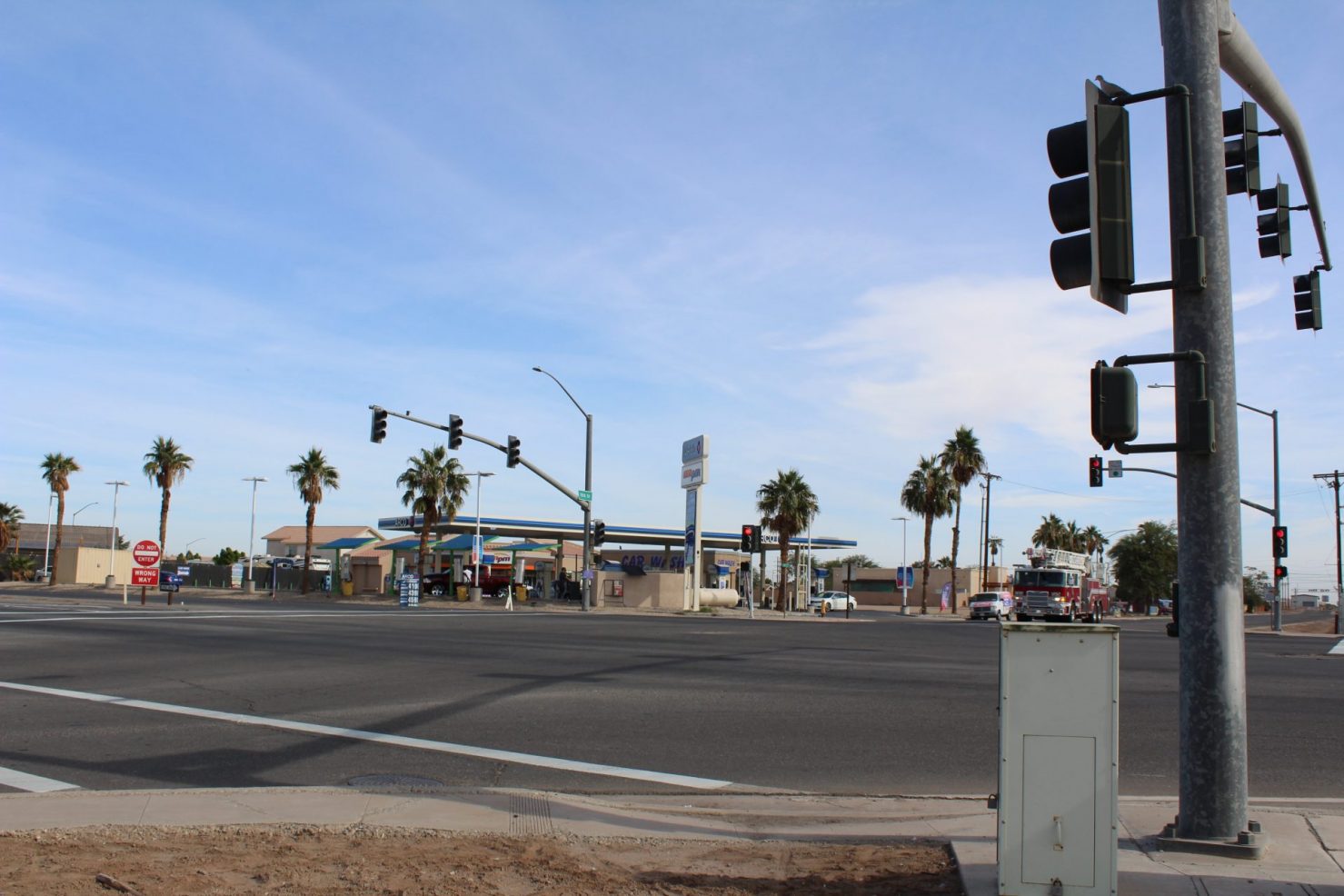 The intersection of Highway 86 and 15th Street in Imperial is shown. | KATHERINE RAMOS PHOTO
Home
Regional News
In Regional News

Study of Traffic Near Frank Wright Middle School Due Dec. 15

IMPERIAL — For a second time in the past few weeks, an Imperial resident has brought concerns to the City Council over how traffic at Highway 86 and 15th Street will affect children in the area as they make their way to nearby Frank Wright Middle School.

Resident Chuck Jernigan spoke up during public comments of the Imperial council meeting on Wednesday, Nov. 17, with his concern over the lack of action by the city over the traffic issues on Highway 86 and 15th Street, with Jernigan offering what he called a temporary solution.

Jernigan suggested the city stagger the use of the lights for the eastbound and westbound traffic, saying that is where the main issue has been with the lights going on at the same time. He said when the light is green and children are crossing the street to get to school, vehicles that are eastbound on 15th Street are unable to turn onto Highway 86 if going north.

He says the city should work with the school to get the crossing guards to only cross children when the traffic is going westbound. This would cut down on the amount of time it takes people heading north to get across the highway.

“This might be a temporary solution to the hazard that is out there,” Jernigan said.

This is not the first time Jernigan has brought up this traffic issue. He also spoke about the intersection at the Nov. 3 City Council meeting. He was disappointed the issue was not put on the meeting agenda for Nov. 17.

A study is being done of the area in connection with the beautification of Highway 86, and the city is aware of the hazard that is out there, City Manager Dennis Morita said on Wednesday.

The is ongoing but could be done in its earliest form by end of December, Assistant City Manager Alexis Brown said. The contract for the study is scheduled through July, but Brown said the city is expediting the portion of the study where Jernigan has proposed the solution.

The results of the study for that area should be available for public viewing during the Dec. 15 meeting, Brown said.

Morita said any changes to the traffic signalization, even the simplest, would have to be done with the cooperation of the school. He told Jernigan the council would not have an answer until after the Dec. 15 meeting.

“Anything that happens out there is going to involve collaboration with the school district,” Morita said.

Jernigan promised to come back in two weeks to discuss this issue again, questioning why there was no action when he says a few phone calls could have gotten it done because “this is something you could do in three or four days.”

Although Jernigan has brought the traffic issue up twice now, there were discussions among residents and the council going several months back, about traffic concerns for the area in general tied to an ongoing commercial development at Highway 86 and 15th Street between the highway and Frank Wright. A few months ago, the U.S. Postal Service opened its new facility there, but several other retail developments are expected to bring significant increases in traffic, including a Starbucks and a McDonald’s.