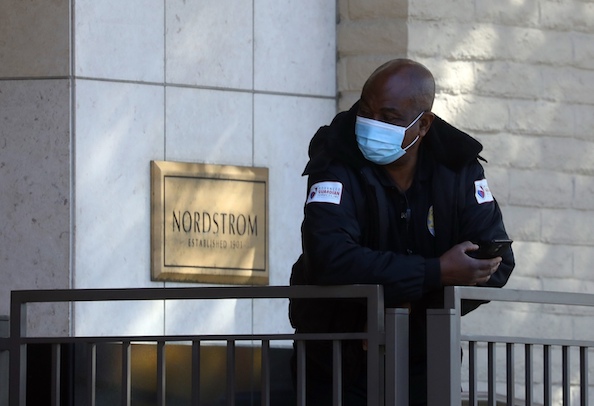 Note: The newsletter will pause until Monday, Nov. 29. Happy Thanksgiving!

Plus, Newsom goes to Mexico

‘Tis the season … for more police officers at shopping malls.

And it appears more stores were ransacked than in initial reports: Robbers made off with more than $40,000 in stolen goods from a San Jose Lululemon, storefront windows were smashed at Louis Vuitton and Saks Fifth Avenue on Beverly Hills’ Rodeo Drive, and burglaries at San Leandro and Oakland cannabis shops resulted in shootouts in the wee hours of Monday morning.

Newsom said Monday that the budget proposal he’ll send to state lawmakers in January contains “an exponential increase of support” to help cities and counties fight organized retail theft “and other quality of life issues.” But he also suggested the problem isn’t just the state’s to solve. “Mayors have to step up,” Newsom said. “Gotta be assertive, gotta be tough.”

The governor, who said that his San Francisco wine and hospitality business has been burglarized three times in the past year, also touted a bill he signed in July that renewed the state’s organized retail theft task force. Newsom said the task force has conducted over 773 investigations that resulted in “hundreds of arrests” and nearly $20 million in recovered merchandise.

Shortly after making those comments at a San Francisco vaccine clinic, Newsom’s office announced that the governor had left the state to join First Partner Jennifer Siebel Newsom and their four children in Mexico, where they are slated to stay until Nov. 28. Lt. Gov. Eleni Kounalakis will serve as acting governor in Newsom’s absence.

California has administered 57,086,595 vaccine doses, and 67.1% of eligible Californians are fully vaccinated.

A few hours after Newsom departed to Mexico, the state released a seven-month-overdue report into its problem-plagued COVID-19 testing lab, for which it recently auto-renewed a contract worth up to $1.7 billion. State health inspectors had warned in February that the lab could lose its license; in the Monday report, they said the lab had “satisfactorily addressed all the identified deficiencies” and inspections were closing “with no sanctions imposed.” But the report shows that as recently as Oct. 21, state inspectors planned to impose sanctions on the lab for certain deficiencies that weren’t satisfactorily addressed until Nov. 10 — more than a week after California auto-renewed the lab’s contract. A separate federal investigation into the lab is still ongoing.

In other COVID news, California is seeing “encouraging” numbers, including the nation’s lowest positivity rate of 1.9% and declining hospitalizations and intensive-care admissions, Newsom said Monday at the San Francisco vaccine clinic. But, he warned, Californians can’t “let their guard down.” Although the state as a whole is doing better than it was a year ago, at least 18 of 58 counties on Monday had more COVID hospitalizations than they did at the same time last year — and another five had just as many, CalMatters’ Ana Ibarra and Hannah Getahun report. And although virtually all adults are now eligible for booster shots, appointments can be hard to come by: In most Bay Area counties, none are available until least early December. Santa Cruz County, meanwhile, has reinstated its indoor mask mandate to help stave off a possible winter surge.

Newsom on Monday appointed Alice Reynolds, his senior advisor for energy, as the next president of the California Public Utilities Commission. If confirmed by the state Senate, Reynolds will take over on Dec. 31 for Marybel Batjer, who announced her plans to resign in late September. One of the biggest tasks set to land on Reynolds’ plate: overseeing PG&E, which is facing billions of dollars in losses and is also under federal investigation for possibly causing the second-largest blaze in California history. And fire season isn’t over yet: Southern California is bracing for increased fire risk over Thanksgiving due to a forecast of dry, gusty Santa Ana winds expected to reach their peak on Thursday.

Northern California is in slightly better shape due to last month’s atmospheric rivers that brought much-needed rain. However, no significant storms have materialized since then, prompting some ski resorts — including Palisades Tahoe — to delay this week’s planned reopening until early December. Experts say some “pretty big storms” could hit the state around Nov. 30 or Dec. 1, though it’s still too early to know for sure.

How serious is California’s housing crisis? Well, Long Beach City College recently authorized homeless students to sleep in their cars in a secure parking lot. And at least four University of California campuses have resorted to renting hotel rooms for hundreds of students unable to secure housing — though they’re offering different levels of financial assistance, Ryan Loyola and Sindhu Ananthavel report for CalMatters’ College Journalism Network. At UC San Diego, undergraduates must pay for their own hotel rooms — which works out to about $5,000 per month even with a discounted rate negotiated by the university. Contributing to the steep costs, many students are forced to eat out or order in food because the hotel rooms don’t have kitchens. Add lengthy commutes and frequent shuttling between hotels, and you get a recipe that some students say have caused them to fall behind in their classes.

In other housing news, the state Department of Housing and Community Development on Monday warned San Francisco that its permit process may be violating California law by “constraining the provision of housing in San Francisco” — the latest state crackdown on the city’s housing policies. San Francisco now has 30 days to explain to the state why it blocked 800 housing units in recent months.

Dec. 1 at 12 p.m.: Join CalMatters and the Milken Institute for a virtual discussion on why California is failing to recoup jobs at a pace on par with the rest of the nation. Register here.

As a Thanksgiving treat, here’s a second column from Dan: Will high-income Californians get a big tax break?

A scorecard for the redistricting commission: After 70 years, California has finally taken partisan politics out of district drawing, writes Tony Quinn, a longtime Republican consultant.

DoorDash to pay $5.3 million to city couriers over alleged violations of past benefits. // San Francisco Chronicle

Pelosi’s Presidio deal is a reminder that power has its perks. // Washington Post Opinion

One of San Francisco’s most historically ignored neighborhoods is home to a long list of hidden gem landmarks. // San Francisco Chronicle