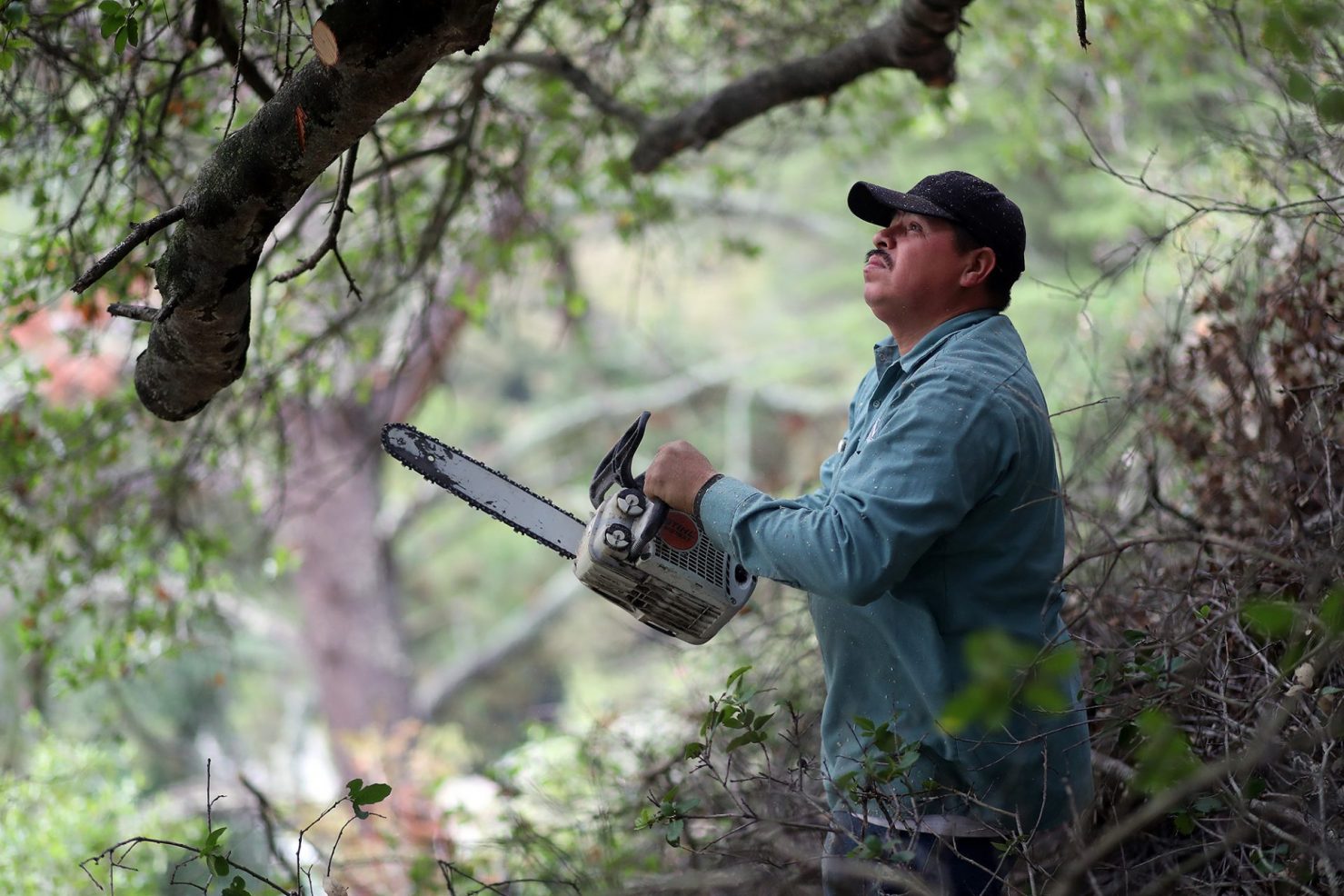 Jorge Mijango of Ken's Rototilling and Landscaping uses a chainsaw to cut trees for fire mitigation at a property along Via Floreado road in Orinda on Nov. 16, 2021. The landscaping company owns around 50 gas powered tools that could be impacted by a state ban on new small gas motors. Aric Crabb/Bay Area News Group
Home
California
In California

A 50% Coupon for One Tool? Gardeners Call California’s Subsidy Inadequate

California will ban most new gas-powered lawn equipment starting in 2024, but landscapers and gardeners warn the transition will cost them money and jobs.

Though Gov. Gavin Newsom has signed a bill banning the sale of most new gas powered tools by 2024, gardeners and landscapers say a $30 million state subsidy isn’t nearly enough to help small operators make the switch to electric.

The state agency responsible for administering the subsidy estimates it has only enough to give each self-employed gardener a 50% coupon for one tool, far from the truckload of leaf blowers, lawn mowers, small chainsaws, brushcutters and trimmers most haul around.

In fact, local governments have learned they need to offer more. In Southern California, a regional air quality district that has been running a similar incentive program since 2017 saw few takers until it increased rebates to 75% per tool. The district paired that with an outreach program and encouraged landscapers to test electric equipment.

The California Air Resources Board is still figuring out who will qualify for the rebate but Assemblymember Marc Berman, one of the authors of the bill, said he’s open to adding more funding if needed.

“Let’s not make the perfect be the enemy of the good,” said the Menlo Park Democrat.

Environmentalists hailed the first-in-the-nation law for advancing California’s clean energy goals, noting the state estimates that smog-forming pollution from small gas-powered engines will surpass emissions from passenger cars this year. But electrifying the landscaping industry creates financial and physical burdens for the estimated 60,000 one-person and often unlicensed landscaping operations, an industry with an average income under $40,000 a year, according to the Bureau of Labor Statistics.

There’s an argument for subsidizing the transition. An electric leaf blower and batteries cost nearly twice as much as a comparable gas version. California estimates that a full transition of nearly 3 million tools used by landscaping professionals will cost  $1.29 billion.

Bryan, a landscaper who asked to be identified by his first name only because he fears losing business, uses a mix of electric and gas equipment. The electric ones fall short.

Already, Bryan has told his kid he can’t afford books or a new laptop. The cost of a full conversion by purchasing all electric tools, he said, would require him to raise prices 30%. He fears his residential clients will purchase their own tools and do it themselves, pushing him out of a job.

When the bill was signed, Berman and Assemblymember Lorena Gonzalez of San Diego called it a win for both the environment and human health. Electric tools have already been widely adopted by California homeowners, but only a fraction of commercial landscaping companies have made the switch, according to a 2018 survey by the air resources board.

At that time, 8 in 10 landscapers said they planned on buying gas-powered equipment with many prioritizing performance, run-time and cost. But operating a gas-powered leaf blower for one hour, for example, emits the same amount of pollution as driving a Toyota Camry from Los Angeles to Denver, according to the air board.

The lawn equipment conversion will bring the rest of the state in line with cities such as Palo Alto, Los Altos and Menlo Park, which have already banned noisy leaf blowers. The law also directs the air resources board to come up with statewide regulations for other small motor equipment, such as golf carts, small generators and power washers.

But the landscaping industry, the main target of the ban, says the transition has already been costly.

“I never spent $200 on something that lasted 45 minutes,” Wood said, “and it doesn’t last for six to eight houses a day.”

Once the batteries drain, Wood’s two employees resort to raking, which takes three times as long to complete a job.

Tests back him up.

Consumer Reports rated gas and electric tools, such as lawn mowers, leaf blowers and string trimmers, side by side. The nonprofit consumer organization found that battery-powered tools, with low maintenance and ease of use, were strong candidates for homeowners with less than an acre of land who could wait to recharge their batteries. But when it came to larger plots, more robust weeds to whack, or long hours of use, gas tools excelled.

“As an industry, we want this (battery-powered) equipment to be able to handle what we throw at it,” said Sandra Giarde, executive director of the California Landscape Contractors Association. “But it’s not there yet.”

The air resources board said the technology is close enough. While electric tools may not have the same power, they offer other benefits, such as longer lifespan, better torque for some tools and savings on gas and maintenance, said air pollution specialist Christopher Dilbeck.

“We recognize that, yes, there will be substantial costs associated with what we are proposing,” said Dilbeck. “That is part of why this funding is available.”

The board, which will allocate the state’s $30 million subsidy, has yet to release how it will hand out incentives other than saying it will target small operators, including those without a business license. In one scenario, California could offer 12,000 small landscapers a 50% discount on all their new tools, or every sole-proprietor could receive a 50% discount on one tool.

This article by Jesse Bedayn first appeared on CalMatters and is part of the California Divide, a collaboration among newsrooms examining income inequality and economic survival in California.