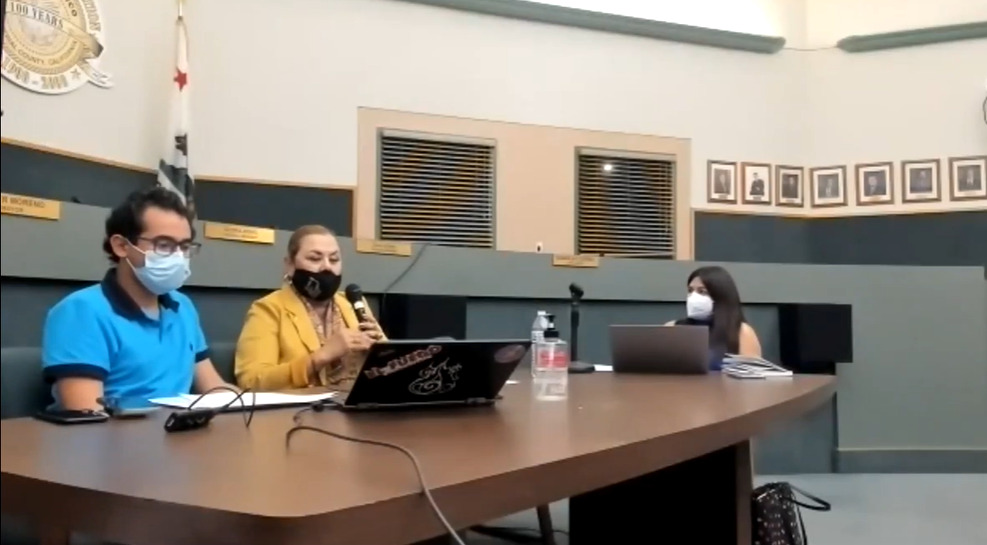 CALEXICO — A pair of Calexico City Council members are hoping to use a series of virtual community forums to inform and engage a greater part of the city’s population in civic matters.

In turn, it is hoped that those hard-to-reach community members will help advise council members and city officials about matters of importance that city officials may not be aware of or are neglecting.

The first of these forums was hosted virtually by council members Raul Ureña and Gloria Romo on Monday, Nov. 22 from City Council chambers.

The two-hour meeting was conducted in both English and Spanish, an apparent acknowledgement that the forum’s targeted audience was primarily the community’s Spanish-speaking populace.

“Direct democratic (participation) from the community is valuable and important for you to tell us what is broken for us to move and transform this city,” Ureña said in Spanish at the close of the meeting.

Rather than have the council primarily consider resolutions that the city’s administration has proposed, Romo said she’d like to see more matters come before the council that the citizenry has advocated for.

“Aside from what’s on the agenda, what other problems are present in Calexico,” Romo rhetorically asked in Spanish.

Much of what was discussed during the forum were matters that the City Council recently acted on or soon intended to.

Virgen led off the forum by cautioning the public that current local COVID-19 daily case and hospitalization rates were nearing levels that hadn’t been seen since the winter holidays of 2020, when social gatherings had prompted a spike in numbers.

He urged people who had plans to gather this year for the holidays to follow public health officials’ recommendations and practice social distancing and wear face coverings.

He also recommended that vaccinated people consider getting a booster shot, which will provide more protection against serious illness should one contract the coronavirus.

“Over time, antibodies wear out and numbers go down and (people) become susceptible again,” Virgen said.

When the forum turned to the topic of the city’s $9.5 million allocation of American Rescue Plan Act funds, City Manager Figueroa provided a summary of what ARPA expenditures had been approved by the council to date.

Those expenditures included the provision of about $7,000 for each full- and part-time city employee, who as essential workers were qualified to receive the financial assistance under the ARPA guidelines, Figueroa said.

The purchase of replacement vehicles for the city’s aging public safety fleet represented the city’s other ARPA expenditure, which has totaled about $2.2 million of the $4.75 initial allocation the city has received.

Further suggestions for the use of ARPA funds were presented during the forum. Romo said she would like to see funds used to provide Spanish-language translation for the council’s videorecorded meetings.

“For many years, the Spanish-speaking population of Calexico hasn’t participated because of the language barrier,” she said in Spanish.

She also advocated for the city’s ARPA funds to be distributed to essential workers in the private sector, a recommendation that was supported by both Ureña and community health advocate Flores.

Flores said she was particularly interested is seeing ARPA funds assist farmworkers. Many had reported feeling additional stress on the job and at home both prior to and during the pandemic, as a recent survey of more than 200 workers revealed.

“That’s the reality of what the farmworkers are experiencing,” she said.

For his part, Ureña said the reason he had voted against the resolution authorizing hero pay for the city’s employees was because they possessed greater job security and benefits compared to many others within the city.

Ureña said he hopes alternatives other than those proposed by the city’s administration are considered for the city’s potential use of the remaining ARPA funds.

“I hope that we have those conversations moving forward so that when we make these decisions, we have all the options on the table,” he said.

Both Ureña and Romo raised questions about how ARPA funds may potentially be used to bolster the city’s affordable housing initiatives and were told by City Manager Figueroa that the only likely eligible use at present was to enhance the city’s water and sewer infrastructure, which in turn would benefit future development.

Figueroa further explained that the city’s recent decision to lower building permit fees for accessory dwelling units from about $4,500 to $1,300 per unit would also help meet the city’s affordable housing needs.

“This is an effort as part of ongoing policy changes that will make sure that we address the current economic climate of development in our city so we can be working hand in hand and partnering up with those who want to invest and develop in Calexico,” he said.

A discussion about transportation issues in the city revealed that the transit company the council recently approved to provide services in the city was still working toward gaining city and state compliance and was expected to soon begin operations.

The city is also partnering with the Imperial County Transportation Commission to establish an “Uber-like” rideshare program that would allow residents to request transportation from their homes to other points within the city, Figueroa said. The program will be funded by ICTC.

The recent cancellation of a Dec. 9 event in downtown Calexico similar to the Feria De La Raza the city hosted in October proved to be a sore point for Romo, who suggested during the forum that the city needs to work harder to make such events a reality, regardless of the additional time, labor, and expense it presented to the city.

“The community deserves that and more,” she said.

Additional topics discussed during the forum included the lack of any public restrooms in the downtown area, the city’s recent legalization of sidewalk vendors, progress related to the New River Strategic Plan and ongoing air-quality monitoring efforts.

Regarding the New River plan, Figueroa said the project’s regulatory permits should be secured from both state and federal governments in January, allowing procurement of construction materials to begin soon afterward.