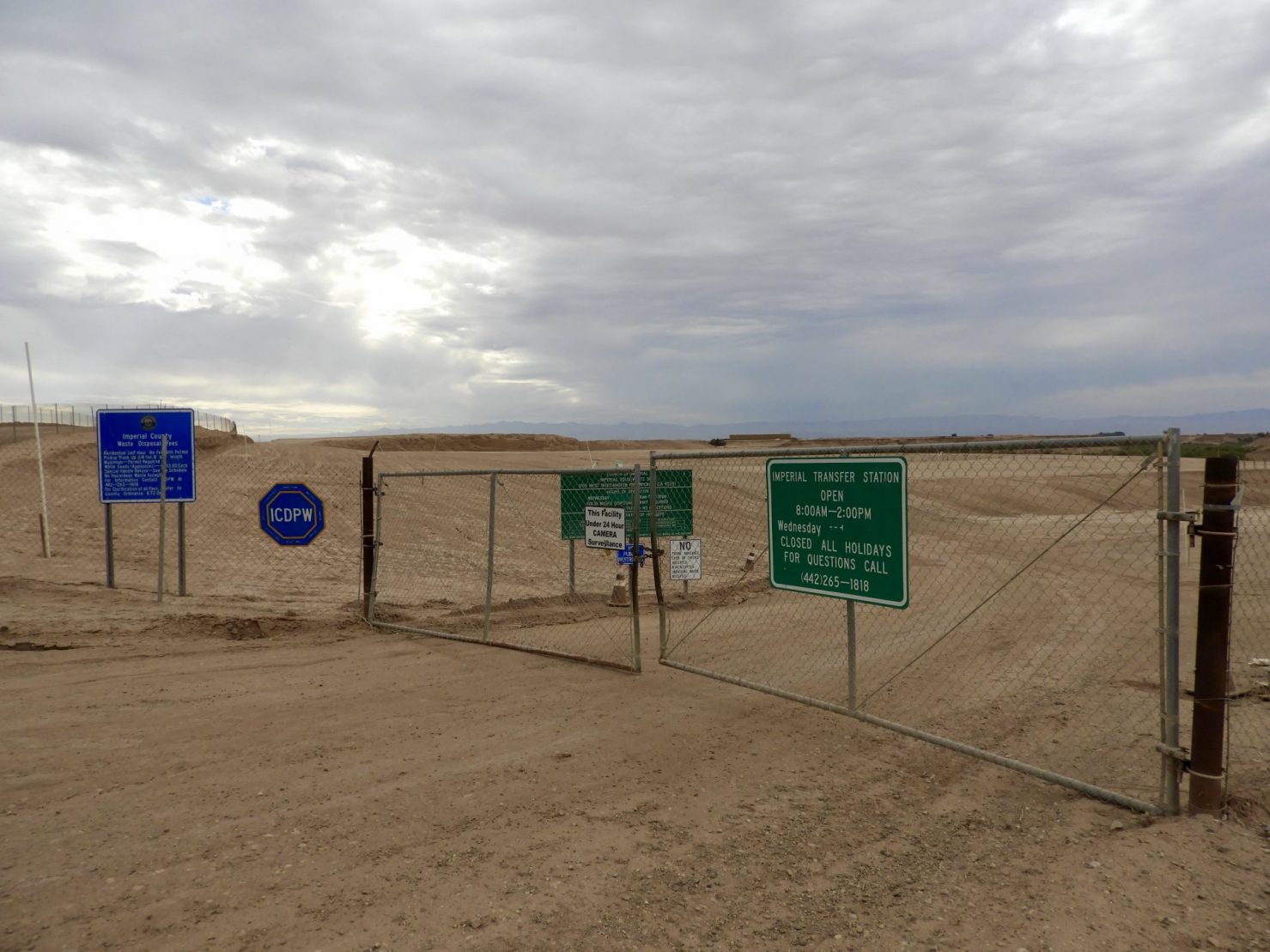 The gate to the Imperial Landfill, located off Worthington and Forrester roads, is locked as the days of operation are already limited to one day a week. The county approved a new solid waste plan on Tuesday, Nov. 23, that will eventually close the landfills and haul waste outside the county. | MARCIE LANDEROS PHOTO
Home
Regional News
In Regional News

EL CENTRO — After the county of Imperial was informed earlier this year that it is out of compliance with mandatory state recycling regulations that would require raising fees up to six times the current rate, the decision was made to adopt a new solid waste plan that would include trucking trash across state lines.

The Imperial County Board of Supervisors begrudgingly approved the new plan during its meeting on Tuesday, Nov. 23, with at least one supervisors incensed over the hypocrisy of hauling trash outside the county.

District 4 Supervisor Ryan Kelley reminding those listening on Tuesday that just a few weeks ago the board voted to refuse to accept waste from Los Angeles and San Diego counties in similar circumstances.

“We are against importing trash into Imperial County, but yet we’re going to send it over the state line into Arizona. What the hell will we be doing? I know that I’ve read enough to know what the definition of a hypocrite is,” Kelley said with frustration.

Imperial County Public Works Director John Gay said the county was informed on Feb. 8 by the California Environmental Protection Agency’s Department of Recycling and Recovery (CalRecycle) that the county was out of compliance with state mandatory commercial recycling and mandatory commercial organics recycling requirement, components of Senate Bill 1383.

“This board is going to have to make key decisions with regards to pivoting to no longer being landfill-centric, which is what we’ve been for decades, and moving towards more of a hauling format,” Gay said Tuesday.

Imperial County’s new solid waste plan will have the county move away from having local landfills in favor of developing a trash service, which would include recycling services, that will haul trash across state lines for disposal. Gay stated that the goal was to eventually be able to close the landfills and move landfill staff into other divisions of the county Public Works Department.

“So the choice really, that we see in our department, it’s one or the other, given our fiscal constraint, and given the statutes that are going to require, basically, a county service,” Gay said.

The decision to move in this direction was not an easy one for Gay nor the county board, but according to Gay, the alternative would require raising the solid waste fee, which had not been raised since the 1980s, by five or six times the current level. This fee can be found in the details of property owner’s property tax, costing residents and businesses $78 a year and granting them access to eight landfill sites in Imperial County, according to the county.

In September 2016, California passed SB 1383, which set methane emissions reduction targets in a statewide effort to reduce “short-lived” climate pollutants. Methane is a powerful greenhouse gas but is classified as “short-lived climate pollutant” due to its atmospheric lifetime of around 12 years.

Some 20 percent of the state’s methane is emitted from organics in landfills, making it the third-largest source of methane in California. CalRecycle estimates that methane is 84 times more potent as a greenhouse gas than carbon dioxide despite its relatively short life.

Organics like food scraps, yard trimmings, paper, and cardboard make up half of what Californians dump in landfills, so reducing that waste will have the fastest impact on the climate crisism according to CalRecycle. CalRecycle’s goals are to reduce organic waste disposal 50 percent by 2020 and by 75 percent by 2025 and to achieve this the state is requiring local agencies like Imperial County to provide organic recycling programs.

“CalRecycle was very clear in the fact that in the unincorporated area, we had to have a plan in place for your organics as well as for the recycled materials. So we work with them, and we put together what’s before you today, which is a plan,” Gay said.

In the end, despite frustration over the new laws and hesitation at exporting waste, the board voted to approve the plan, with an amendment that Gay is required to provide the county board, and by extension the public, a document and a presentation that explains why this is the choice the county has to make.

“I will second that motion if you would be OK to amend your initial motion so that we could bring full financial disclosure on the actual economic burden that I know we’ve discussed for a few years now, to give this dais and the public a clear knowledge of the burden the county is undertaking, as well as the revenue stream that will be hit hard by any modification, and the security costs associated with a service,” District 1 Supervisor Jesus Escobar said.

Previous
Happy Thanksgiving to All