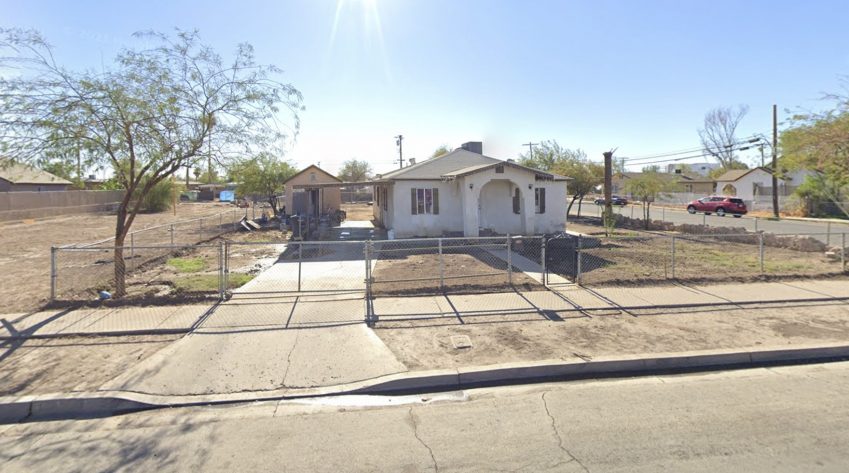 A fatal stabbing at 191 W. Orange Ave. in El Centro occurred in the small “outshed” to the east of the main residence around noon on Wednesday, Nov. 24. | GOOGLE IMAGE
Home
Public Safety
In Public SafetyRegional News

EL CENTRO — A 29-year-old man was stabbed to death in El Centro on Wednesday, Nov. 24, and an acquaintance of his is being held on suspicion of murder in the county jail, according to El Centro police.

Just before noon, Ivan Saldana of El Centro sustained four or five stab wounds to the left side of his torso just under his chest and apparently either died on the way to the hospital or at El Centro Regional Medical Center, El Centro police Sgt. Steven Fisher said.

Arrested for the crime was 27-year-old Angel Jesus Beltran of El Centro. No bail information was available, but he did remain in custody as of Thursday, Nov. 25.

Fisher described the stabbing as an intentionally aggressive attack, similar to a “prison-style hit,” he said.

The stabbing occurred at Saldana’s home he apparently shares with family at 191 W. Orange Ave. The crime, however, did not happen in the home.

“He was stabbed in an outshed just east of the residence. The suspect came to the house asking for the victim,” said Fisher, adding that someone at home directed the suspect to the shed at the rear of the property.

The suspect fled the scene, but witnesses knew him from the neighborhood and he was arrested at his home about a block and half away within about 15 minutes, Fisher said.

Police obtained a search warrant for Beltran’s residence, where they found bloody clothes and a bloody weapon matching the description of the knife used in the attack, the sergeant said.

Rainbows Break Out Over Imperial Valley

No motive has been established, and Fisher declined to immediately say it was drug or gang-related. He did say the suspect had come to the victim’s home several days earlier looking for the victim.

The shed where the stabbing occurred was reportedly where Saldana hung out and possibly slept.

No initial court date has been set as of Monday, Nov. 29. Assistant Imperial County District Attorney Heather Trapnell said the case had not come to the DA’s office, adding she could not speak to whether Beltran would be charged. If he is arraigned, that would not happen until Tuesday afternoon, Nov. 30.

The Wednesday before Thanksgiving is one of the worst times to be arrested because a person would not get a court appearance for almost a week.