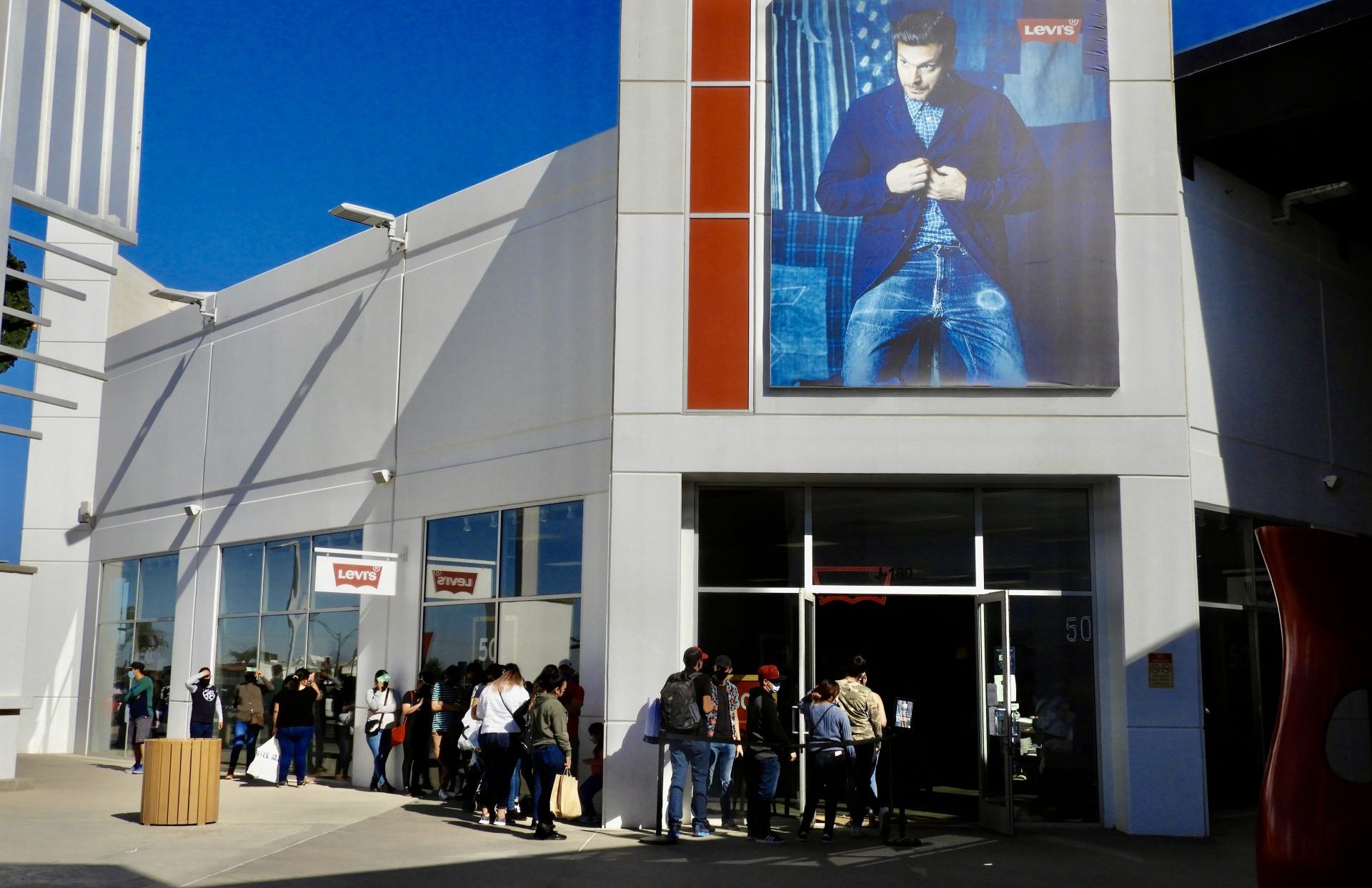 The line to get into Levi Outlet Store at the Gran Plaza Outlets in Calexico wrapped around the building two hours after opening on Black Friday, Nov. 26. | MARCIE LANDEROS PHOTO
In BusinessRegional News

CALEXICO — Stores throughout Imperial County opened their doors on Black Friday morning, Nov. 26, forgoing the classic midnight opening associated with the day, and while many local retailers were seeing so-so Black Friday sales, there were a few bright spots.

Some stores reported mixed results, saying they were busier than a year ago but not as busy as pre-pandemic Black Fridays, with the exception of some Gran Plaza Outlets shops in Calexico.

Retailers like the Puma Outlet, the Levi Outlet Store, and the Adidas Outlet Store reported seeing higher numbers, and lines could be seen several hours after opening on Nov. 26.

“(Black Friday) is going pretty well; better than expected. … A lot of people are just spending money trying to buy gifts for their family and that’s pretty good for us because it keeps us moving, because it’s busy and more occupied,” said Yohcet German, sales supervisor for the Puma Outlet, on Friday.

Gran Plaza’s shops clearly benefitted from the reopening of the border to fully vaccinated nonessential travel on Nov. 8. Restrictions for everyone except essential workers had been in place since March 2020.

“This is a family tradition of ours. I cross from Mexicali to my sister’s house in Calexico. We would eat our big dinner, then go shopping at midnight when the stores open,” Mexicali resident Maria Lopez said while shopping at Gran Plaza. “We couldn’t see each other last year, so I am very happy to go with her this year even if it’s not at midnight.”

In the central portion of the Valley, at the stores around the Imperial Valley Mall in El Centro, shoppers commented on the comparative lack of crowds, which seemed to mirror the more national Black Friday trends of reduced numbers compared to 2019.

“I expected it to be busier. I have been out shopping all morning, and there are other people, but like, I don’t know, not a lot. I was expecting huge crowds like before the pandemic,” said Miranda Smith of El Centro, in an interview outside Best Buy.

In pre-pandemic years, Best Buy was among the stores that opened up on Thanksgiving afternoon, and people regularly could be found waiting in line for hours, even a full day, before opening.

With last year’s Black Friday heavily influenced by COVID-19 restrictions, stores had major capacity limits if they were opened at all. Many shoppers found themselves turning to online purchasing in order to get their Black Friday deals.

Online shopping created a strain on the local economy, not just because local businesses lost sales revenue, but because local governments missed out on sales-tax revenue. Sales tax proceeds from online purchases go to the community that the distributing center is located in. Legislation meant to address that this year was not passed.

Nationally, shoppers did return to stores on Friday but in nowhere near the volumes of 2019. Traffic at retail stores on Black Friday dropped 28.3 percent compared with 2019 levels, as shoppers shifted more of their spending online and kicked off their shopping earlier in the year, according to NBC News, using preliminary data from Sensormatic Solutions.

Traffic was up 47.5 percent compared with Black Friday 2020, Sensormatic reported, at a time when the country was going through another surge of COVID.

As expected, with a slight rise in retail shop sales since last year, online Black Friday sales took a dip.

Retailers saw $8.9 billion in online sales on Black Friday, down from a record $9 billion spent a year earlier, according to NBC, citing data from Adobe Analytics. Adobe analyzes more than 1 trillion visits to U.S. retail sites, with more than 100 million items in 18 different product categories.

Although the in-person numbers weren’t what economic forecasters and retailers had hoped for, the upward trend (and downward or flattened arc of online) shows some confidence of life slowly returning to normal.

“We are very excited that the state of California has worked so hard to — and Imperial County to be more specific — to decrease the amount of COVID cases we have so that our mandates and restrictions could be lifted, so that there could be an influx in the economy during Black Friday,” said Daniel Sohn, chief executive officer of the Imperial Valley Regional Chamber of Commerce, in a phone interview on Friday.

“I think that the spirit of togetherness is upon us. … I think people are purchasing and going out shopping … and so we are seeing an influx in retail,” Sohn said, reminding residents to shop small and to shop local.

Elizabeth Garcia of Brawley was at the Imperial Valley Mall on Friday, but more for her mother and the tradition than for the practicality of it all.

“I am only here because my mom insisted we come to the mall to shop for Black Friday. She’s in her 70s, and I can’t get her to start shopping online like me,” Garcia said. “I bought my family’s gifts earlier this week, and they’re already at my house and they came gift wrapped. Why would I wanna go through all of this?”

Next
No Less Excitement at Smaller, Virus-Safe Comic-Con Special Edition