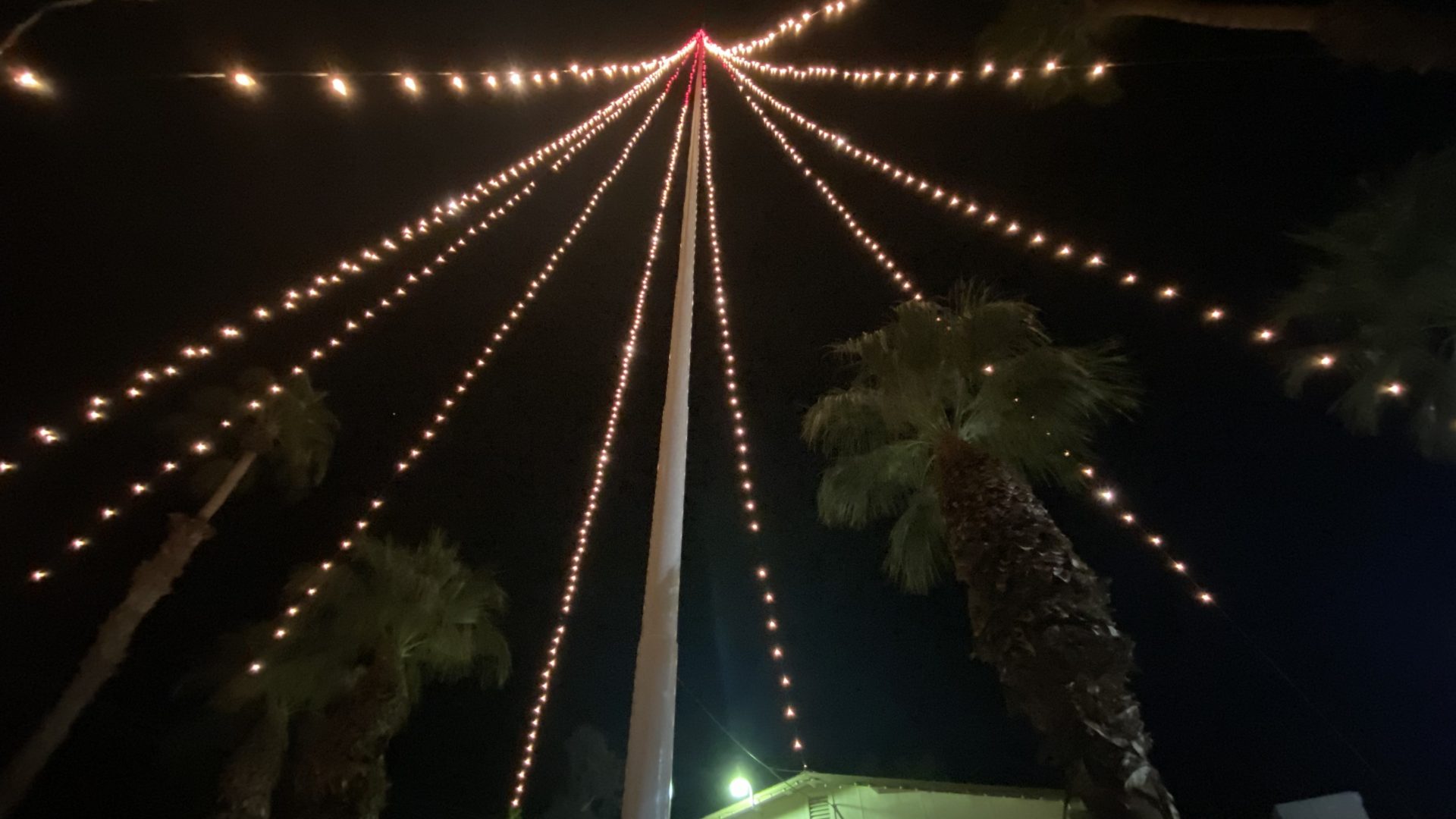 Holidays Events Planned in All Parts of Imperial Valley

CALIPATRIA — More holiday-themed merriment is on the way than you can shake a candy cane at, and it kicked off with the lighting of the “World’s Tallest Flagpole Below Sea Level” in Calipatria on Monday night, Nov. 29.

The lighting of Brawley’s tree in the Kiwanis Kiosk at Plaza Park was up next at 5:30 p.m. Wednesday, Dec. 1, with events in Holtville and El Centro to follow soon after.

One of the biggest events of season, which will see a welcome return from its COVID-related cancellation last year, will be the 75th annual El Centro Christmas Parade from 10 a.m. to noon on Saturday, Dec. 4.

(Scroll further down to get the list of events)

Meanwhile, in Calipatria, resident Yoli Ibarra attended the “tree” lighting on Monday evening with her son for the first time, but she has always seen and driven by the pole every year, which is strung with lights made to look like a tree. She lives around the corner and happily gets to see it all season long.

“We’ve always come, do a little drive-by, and let the kids get down to see the tree,” Ibarra said. “But I love it, the Christmas-tree lighting and all the events in the city. Once the tree is lit, the holidays begin.”

Families sat around the tree and watched Mayor Huston Hisel flip the big switch at the base of the pole. Children played under the lights while their parents and grandparents watched from their seats around the base. Once the tree was lit, everyone was invited into the community center for home-baked cookies, coffee, and socialing.

“We always come every year, came with our kids and not with the grandkids,” one Calipatria resident said. “They’ve all got the Christmas spirit!”

Azalea and Ameera Mara, sisters who were with their parents, said they liked seeing the tree light up and were looking forward to what the season would bring.

“We are looking forward to being with our family and friends,” Azalea said.

Sisters Keilani and Zoey were both excited for Christmas and being at the lighting ceremony with their family Monday night.

“I like it when Santa comes and delivers the presents,” Keilani said.

Calipatria City Council members Maria Nava and Silvia Chavez said the tree-lighting ceremony has been around for years, ever since the flagpole was first built to honor the memory of Helen Momita, wife of the pharmacist and Calipatria resident Harry Momita.

The pole has served as the town Christmas tree at least since the 1960s, said Chavez, who remembered seeing it lit up when she was in kindergarten.

Nava remembers traveling from Niland to Calipatria at the night and the lit up tree being the first thing she could see before entering town.

“A lot of us are very proud of our Christmas tree here in the city. We’re proud to see the flag waving year-round and we are very much excited when we can see coming in from Brawley or Niland at all angles,” Nava said. “And it cheers up the community.”

The city of Holtville will be hosting its tree-lighting ceremony as well on Friday, Dec. 3 at Holt Park from 5:30 p.m. to 8:30 p.m. The ceremony will be followed by the Holtville Chamber of Commerce’s Christmas in the Park Farmers Market with food and vendors.

There will be performances at 6:15 p.m. from the Holtville Middle School band and the Finley Elementary transitional kinder and kinder classes. This year will be the first time the city and the chamber are combining what has been two separate events, chamber executive manager Rosie Allegranza said.

“Everyone just wants to come out and see each other and spread joy,” she said.

A long time Christmas tradition is back with the 75th annual El Centro Christmas Parade in coordination with the Imperial Valley Regional Chamber of Commerce, Los Vigilantes, the city of El Centro, and presented by El Centro Regional Medical Center. This year the theme will be “Golden Jingle Bells” and floats and bands will walk the route along Main Street and 11th Street.

The El Centro Christmas Parade is held every year on the first Saturday of December to kick off the holidays in the city. Even now the floats are being built for the big day. City staff members were constructing floats in the MLK Jr. Pavilion on Monday and Tuesday, Nov. 30.

The night before the parade on Friday, Dec. 3 the city of El Centro will host its own annual Christmas-tree lighting ceremony and street fair on Main Street and 11th Street from 5 to 9 p.m. Entertainment will be provided by Modern Dance Group, Jete Dance Academy, Central Union High School Chorus and Guitar, Southwest Orchestra, and there will even be an ice rink.

The Imperial Valley Chorale Society is staging its holiday tradition on Friday night as well, with its performance of Handel’s “Messiah” with the Imperial Valley Chamber Orchestra at 7 p.m. in Christ Community Church in El Centro. Tickets can be purchased at the door or from local chambers of commerce and are $15 for adults and youths through 12th grade are free.

For Calexico, a small Christmas-tree lighting ceremony has been scheduled for Tuesday, Dec. 7, from 5 to 7 p.m. in front of City Hall. City officials said another could still be planned, but nothing else was confirmed as of publication.

Calexico’s Recreation Department is returning with its Santa’s North Pole Express on Thursday, Dec. 9, a drive-thru event for children who want to get their letters sent off to Santa in time for Christmas.

There will be goodie bags and treats for youths and Santa himself will stop by to pick up the letters before heading back up to the North Pole. The North Pole Express will pull into the Calexico Community Center parking lots from 4:30 p.m. to 6:30 p.m.

The city of Imperial is gearing up for the return of its holiday events as well. On Friday night, Dec. 10, the Imperial Parade of Lights returns, followed by Christmas in a Small Town on Saturday, Dec. 11.

The city’s Parade of Lights will run along Imperial Avenue from Fourth Street through 15th Street and will feature toy and food vendors along the route at three principal locations: Seventh, Ninth, and 11th streets. The parade runs from 6 to 8 p.m.

Christmas in a Small Town, presented by the city and I.V. Regional Chamber, will be from 3 to 9 p.m. Dec. 11, with vendors, food, a beer garden, produce, Julian pies, the annual snow hill, photos with Santa and live music.

Up north, the first Santa’s Workshop hosted by the Chamber of Commerce for Greater Brawley and the Boys and Girls Club will be Dec. 9. This farmers market will have 30 vendors including crafts, food, and drink and “a huge pile of snow.” There will be an ugly Christmas sweater contest, cookie decorating, and raffled prizes. It will run from 5 to 9 p.m. at Brawley’s South Plaza.

Mi Calexico and Gran Plaza Outlets bring back the holiday Art Walk on the Border from 5 to 9 p.m. Dec. 17 at the outlets on West Second Street in Calexico. More than 50 vendors and artists will be on site, including live music, special performances, food vendors with vegan options, craft vendors and art.

Calipatria will be having more holiday cheer later in the month on Dec. 18 with its annual Christmas After Dark, a festival held in Calipatria Park that will a light parade at 5 p.m. and the annual community toy drive will take place at the same time at 7 p.m.

While not necessarily holiday-themed, Strangers and Co.’s 16th annual Viva El Valle massive music and art event returns at a time when many people are home to visit friends and family. It’s scheduled from 4 p.m. to 2 a.m. at The Den, 455 W. State St., in El Centro.

Cost is a $5 donation and the event is all ages.

A story on the various toy drives planned throughout the country will be published separately.

(This story was updated at 11:30 a.m. Wednesday, Dec. 1, with a tree-lighting ceremony scheduled in Calexico.)