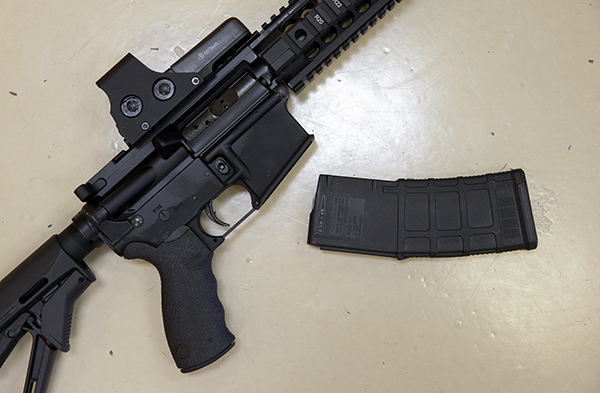 A custom-made semi-automatic hunting rifle with a high-capacity detachable magazine at a gun store in Rocklin on Oct. 3, 2013. Photo by Rich Pedroncelli, AP Photo
Home
California
In California

As California tries to crack down on crime, it secured a sizable victory for its strict gun control laws on Tuesday.

That’s when a federal appeals court reinstated California’s bans on the sale and possession of high-capacity magazines that can funnel more than 10 rounds of ammunition into a single firearm. The 7-4 ruling from the U.S. 9th Circuit Court of Appeals — which gun rights activists plan to appeal to the U.S. Supreme Court — overturns a prior ruling from U.S. District Judge Roger Benitez that declared California’s large-capacity magazine ban unconstitutional. It also suggests that the appeals court will likely uphold the Golden State’s ban on assault weapons, which Benitez deemed unconstitutional in a controversial June ruling that likened an AR-15 rifle to a Swiss Army knife.

Also Tuesday, the Los Angeles City Council unanimously voted to ban ghost guns, untraceable firearms built from components bought online or produced by a 3D printer. A recent New York Times investigation found that ghost guns accounted for a whopping 25% to 50% of firearms recovered at crime scenes in Los Angeles, Oakland, San Diego and San Francisco in the past 18 months.

But one of the most violent places in California isn’t a big city. It’s Kern County, population 900,000, in the southernmost band of the Central Valley. Since 2016, it’s had the highest homicide rate of any California county. And last year, about one out of every 8,000 of its residents was murdered. CalMatters’ Nigel Duara takes a closer look at what’s going on.

California has administered 58,286,182 vaccine doses, and 67.6% of eligible Californians are fully vaccinated.

In other criminal justice news, California could move dozens of permanently medically incapacitated inmates from nursing homes back to state prisons — a move it says is necessary to comply with new federal rules for nursing home licensing, the Associated Press reports. Under the new state policy, only inmates connected to ventilators would be eligible for medical parole — which advocates say could force about 70 of the 210 inmates currently approved for medical parole back behind bars. But the feds say California could avoid such a drastic move by placing the inmates in nursing homes that aren’t federally regulated. When state lawmakers return to Sacramento in January, they will consider a bill that would make it easier to house incapacitated inmates in community health care facilities.

California’s approach to the death penalty has also come under scrutiny, with U.S. District Judge Vince Chhabria of San Francisco arguing in a recent ruling that the state is essentially “flushing massive amounts of taxpayer money down the toilet” by continuing to litigate death penalty sentences despite Newsom’s moratorium on executions. Since it’s extremely unlikely that California will execute anyone in the near future, Chhabria wrote, the state should consider resentencing some Death Row inmates to life in prison — a move that could save taxpayers $170 million annually.

One of the biggest challenges that state lawmakers will face when they return to Sacramento in January: figuring out how to keep schools from falling off a financial cliff. That was made evident in a Tuesday legislative hearing, during which education experts told lawmakers that two straight years of massive budget surpluses won’t be enough for most school districts to offset financial losses partly caused by declining enrollment and surging chronic absenteeism amid the pandemic. But the problem goes beyond COVID-19: California’s birth rate has been declining for years, resulting in fewer kids attending public schools — and therefore less money for schools, whose funding is partially based on enrollment and attendance numbers. The implication: Lawmakers may have to change how public schools are funded.

Meanwhile, how school districts are spending a sizable portion of their budget remains unclear. A whopping 76% of school districts either failed to report employee salary data in 2020 or returned non-compliant data, according to a Tuesday report from State Controller Betty Yee. Yet the budget situation at San Francisco Unified is so dire that California recently hired a fiscal consultant to intervene. And on Monday, the California Department of Education gave the Alameda County Office of Education the green light to closely monitor Oakland Unified’s finances and hiring practices over concerns that it won’t be able to balance its budget.

What would help Republicans gain relevance in a California Legislature so dominated by Democrats that not a single GOP vote is needed to pass tax increases or put constitutional amendments on the ballot? Flipping at least seven seats in the Assembly and five in the state Senate, CalMatters’ Sameea Kamal and Jeremia Kimmelman report. That could conceivably happen in next year’s election — which will be the first to use new district boundaries that an independent commission is rushing to finalize before Christmas. But while redistricting could determine California’s shade of blue, it won’t change the fact that it’s a blue state, experts say. It’s a different story in the U.S. House of Representatives, where Republicans only need to flip five seats nationwide to take control; California may have inadvertently helped their cause by losing a House seat for the first time in history.

To visualize how the proposed maps could change the partisan makeup of the state Legislature and California’s House delegation, check out the cool graphics in Sameea and Jeremia’s story.

TODAY at 12 p.m.: Join CalMatters and the Milken Institute for a virtual discussion on why California is failing to recoup jobs at a pace on par with the rest of the nation. Register here.

CalMatters columnist Dan Walters: Political reaction to a spate of smash-and-grab retail thefts indicates that crime could be a hot button issue in California’s elections next year.

Fortifying California’s climate resilience: Clean energy and backup power at the household and community level can help supply electricity when the grid goes down, write Patrick Murphy and Lee Ann Hill of Physicians, Scientists and Engineers for Healthy Energy.

How much tax money does Elon Musk save by moving to Texas? // Bloomberg

WHATMATTERS: Lawmakers Go All In on COVID Vaccine Rules

Pismo Beach was once the Clam Capital of the World. Then the clams disappeared. // Los Angeles Times

Everything you need to know about skiing Lake Tahoe this winter. // The San Francisco Chronicle

Next
Calexico’s Yara Araujo is Migrant Student of the Year