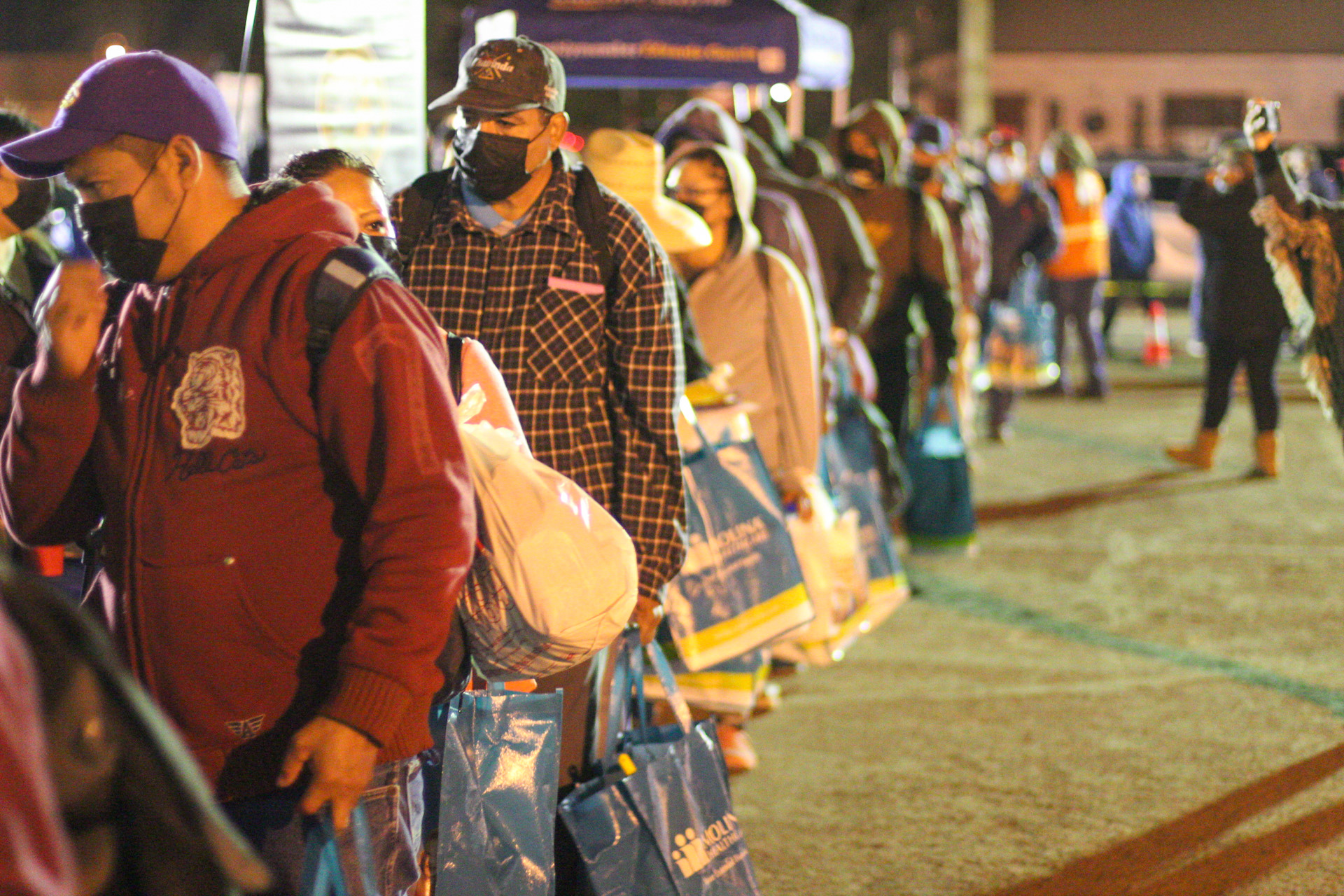 A line of field laborers makes its way through various booths and to get their breakfast of tamales, beans, pan dulce and coffee during the 42nd annual Farmworker Appreciation Breakfast on Heber Avenue in Calexico early Friday morning, Dec. 3. More than 400 farmworkers were served and provided bags with health information and items. | MEGAN JONES PHOTO
In AgricultureRegional News

CALEXICO — Dozens of volunteers and organizations turned out in the wee hours of the morning to pay their respects to more than 400 of the men and women who toil in the fields harvesting the produce that feeds a nation during the winter months.

What’s more, a woman who has been central to representing the legal needs of the farmworker and migrant communities in the Imperial Valley for more than a half century, was also paid tribute in a surprise dedication to her efforts.

Both happened under the cover of darkness on Friday morning, Dec. 3, from 1 to 5 a.m. during the 42nd annual Farmworker Appreciation Breakfast put on by the Farmworker Services Coalition of Imperial County, the state Employment Development Department, the Center for Employment Training, the city of Calexico and the Mexican consulate.

Organizations as varied as Planned Parenthood to MANA de Imperial Valley and Salud Sin Fronteras/Comite Civico Del Valle helped fill more than 3,000 tote bags with various items while volunteers and others nourished the 400-plus farmworkers with meals of tamales, beans, pan dulce, drinks and Starbucks coffee before their day in the fields.

A combination of items related to health and services were provided by the agencies. For example, Planned Parenthood distributed more than 2,500 condoms while Comite Civico and Salud Sin Fronteras distributed bags of face masks, hand sanitizer and information on workers’ rights.

Representatives from the SER National Farmworker Jobs Program provided socks and information. The Imperial Valley Food Bank was on hand to also provide information about their programs and services. MANA distributed bandanas and socks as well.

Free COVID testing was being performed by Nova Diagnostics Lab.

Under the lights of the main staging area in front of the EDD’s One Stop in the 300 block of Heber Avenue was perhaps the highlight of the event — a surprise tribute (at least to her) to California Rural Legal Assistance icon Lupe Quintero.

Quintero, who was worked with the CRLA for 51 years providing legal aid and advocacy for farmworkers in dealing with everything from housing discrimination to wage theft and sexual assault and harassment on the job, was honored with the announcement that the CRLA office on Broadway in El Centro would be known as the “Lupe Quintero Justice Center.”

“It’s a real surprise. It’s a great honor, and I thank you and I thank the farmworkers,” Quintero said. “They are the ones that really deserve to be honored.

“But I am still in shock you guys … but thank you. Thank you to all of you. CRLA has participated in the farmworker breakfast for the 42 years, and we’re very proud of doing that, and we will continue to do that,” she said. “Thank you so very much.”

CRLA officials who made the announcement said the plan was to honor Quintero on her 50th year with the organization, but due to the pandemic, 51 would have to suffice. Quintero was told the lettering over the CRLA’s Broadway office would start going up later that day.