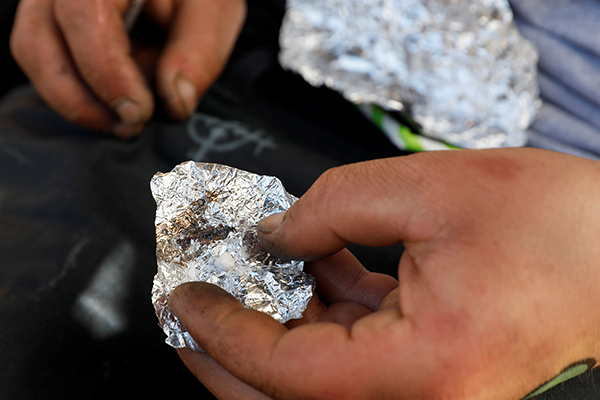 A man living on the streets displays what he claims to be the synthetic drug fentanyl in the Tenderloin section of San Francisco on Feb. 27, 2020. REUTERS/Shannon Stapleton
Home
California
In California

As concern over the omicron variant mounts in California — with the state’s second case confirmed Thursday in Los Angeles County — another public health crisis lurks in plain sight: the drug epidemic.

A jaw-dropping report released Wednesday by the UCLA Luskin Institute on Inequality and Democracy found that nearly 1,500 people, the vast majority believed to be homeless, died on the streets of Los Angeles during the pandemic — 40% because of a drug or alcohol overdose. The staggering number is almost certainly an undercount, experts say.

Also Wednesday, the California Peace Coalition — a group of parents whose kids are addicted to or have died from fentanyl or other illicit drugs — held a die-in protest in the Tenderloin, calling on the state and San Francisco to shut down open-air drug markets, prosecute dealers, and place their kids in mandatory treatment. And they slammed San Francisco leaders for their response to a drug epidemic that killed 712 city residents in 2020 — nearly triple the amount of people who lost their lives to COVID-19.

The news comes about two weeks after the U.S. Centers for Disease Control and Prevention estimated that more than 100,000 Americans — including about 10,000 in California — died of drug overdoses during the year-long period that ended April 2021. That’s a record high and a nearly 29% increase from the year before. Almost 64% of deaths were caused by the synthetic opioid fentanyl.

A heart-rending, stunning Thursday story from San Francisco Chronicle columnist Heather Knight put the human toll of California’s drug crisis — and the inadequate political response that appears to be fueling it — into painfully clear focus. In May, Laurie Steves — who had already lost one of her children to a fentanyl and ketamine overdose — moved to San Francisco to try to wrest her 34-year-old daughter, Jessica DiDia, from the grasp of fentanyl and the Tenderloin. She did not succeed.

California has administered 58,802,815 vaccine doses, and 67.9% of eligible Californians are fully vaccinated.

In a spot of bright news, California’s new jobless claims have dropped to their lowest level since the start of the pandemic, with about 48,000 residents filing new claims for the week ending Nov. 27, according to federal data released Thursday. That’s a decrease of nearly 5,000 from the week before — but California still accounts for a whopping 22% of the nation’s unemployment claims, signaling the uncertain nature of its economic recovery. And the omicron variant appears likely to inject even more uncertainty: On Thursday, Google announced that it will no longer require employees to return to the office on Jan. 10, joining a host of other Bay Area tech companies pushing back planned reopenings due to omicron. Other companies are cancelling business conferences and international gatherings, and the airline industry is preparing for a downturn in business after rebounding over Thanksgiving. Still, some appear optimistic about the future of in-person work: Facebook parent company Meta just snatched up nearly 720,000 square feet of space in Sunnyvale — the country’s biggest office lease of the year.

2. State: Crack down on crime ASAP

Today, Attorney General Rob Bonta is slated to make an “important announcement” about organized retail theft — one that will likely align with Gov. Gavin Newsom’s Wednesday exhortation for state and local leaders to prosecute shoplifters under existing law. And it appears that many are already doing so: A Costa Mesa woman was arrested Wednesday for allegedly stealing more than $300,000 worth of products from high-end retail stores, while Los Angeles police on Thursday announced the arrests of 14 suspects in smash-and-grab robberies there and two Sacramento men were convicted for stealing dozens of catalytic converters from cars in eight Northern California counties. Meanwhile, Beverly Hills police on Thursday arrested a 29-year-old Los Angeles man suspected of fatally shooting Jacqueline Avant — a philanthropist, wife of music legend Clarence Avant and mother-in-law of Netflix co-CEO Ted Sarandos — in her home on Wednesday.

Still, the disturbing burglaries continue: Police are searching for a man dubbed the “snake burglar” who appears to have robbed several Riverside businesses by breaking in and slithering around on his belly. And Oakland is so desperate to beef up its police force that one city councilmember has proposed recruiting officers from other departments by offering them $50,000 signing bonuses.

Speaking of crime, the city of Los Angeles — which is still reeling from Councilmember Mark Ridley-Thomas’s recent suspension following federal bribery charges — is facing a slew of new scandals. They include:

CalMatters columnist Dan Walters: The U.S. Supreme Court may have the final word on one of California’s signature gun laws.

California must prioritize public safety: To protect the public and retailers, we must bring some consequences back into the criminal justice system, argues Assemblymember Vince Fong, a Bakersfield Republican.

Here’s how California should spend its budget surplus: The extra money should go toward the state’s single most pressing and potentially catastrophic problem — water, writes Roger Miller, a retired administrator for Southern California Edison.

‘Why does Mater Dei protect bullies?’ A school and Orange County diocese have lots to answer for. // Los Angeles Times

Thousands of California farmworkers get pay raises thanks to a lawsuit. // CalMatters

How Gavin Newsom’s dyslexia has shaped him as governor. // Sacramento Bee

Next
Potential Delays for Southbound Vehicles at the Calexico West