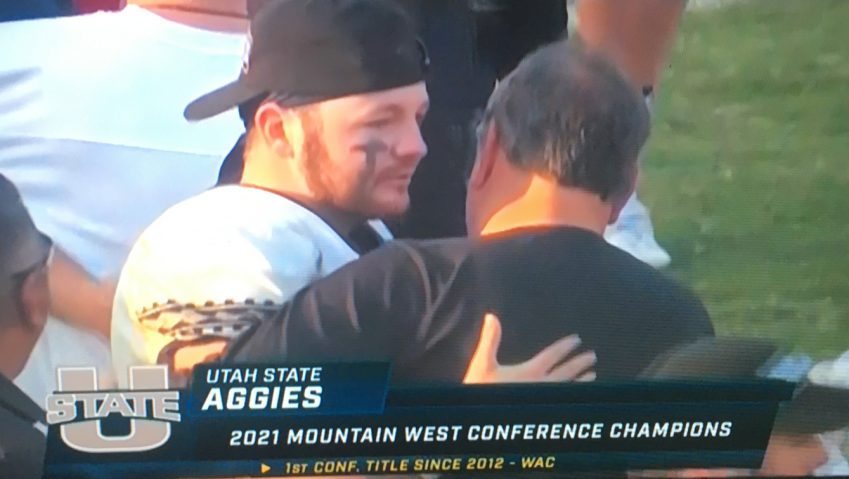 The No. 19 Aztecs (11-2, 7-2, MW) were their own worst enemies at their temporary home in Carson, racking up penalties that contributed to Aggie (10-3, 7-2, MW) scores, They also watched a strength, their play on special teams, turn on them.

Hoke said simply “there are no excuses.” His players echoed the sentiment.

“We didn’t execute on defense, special teams, offense, all around as a team,” linebacker Caden McDonald said. Jesse Matthews added, “We just made too many mistakes, missed too many opportunities.”

Utah State carried a 14-3 lead into the half and put the game away in a disastrous 3rd quarter for the Aztecs.

After a scoreless first quarter – the first time that’s happened in a MW championship game – the Aggies broke through nearing the nine-minute mark in the second.

The drive began with a blocked punt – the first of the season for Aztec Matt Araiza – which gave Utah State a start from its own 47-yard line.

Quarterback Logan Bonner converted on 4th-and-1, completing a 5-yard pass to Deven Thompkins. Two plays later, needing 11 yards for a 1st down, he made a 7-yard pass to Calvin Tyler, Jr., who was knocked out of bounds by McDonald.

Patrick McMorris, though, drew a 15-yard penalty by pushing Tyler, to put the Aggies at the SDSU 18. Four plays later Derek Wright scored on a 5-yard pass from Bonner.

Cameron Thomas – the MW defensive Player of the Year –got called for roughing the passer, again putting the Aggies at the SDSU 18. Tyler ran 17 yards to put Utah State at the 1-yard line, and on the next play carried the ball over for the score.

WHATMATTERS: California on Track for Worst COVID Surge Yet

The Aztecs could have pulled closer with a minute remaining in the half, but Mehki Shaw failed to hold on to a 6-yard pass in the end zone after a hit by Aggie Monte McGary. They settled for a field goal, from 23 yards.

Araiza, the MW special teams Player of the Year, fared little better than Thomas, logging not just one, but two blocked punts.

Utah State began to put the game out of reach in the 3rd quarter, on a 58-yard pass and 20-yard touchdown run from Aggie Brandon Bowling, and a safety following Araiza’s second blocked punt.

San Diego State put up a murmur of protest in the 4th quarter after the Aggies added 10 more points. An ineffective Jordon Brookshire gave way to sophomore Jalen Mayden, who lobbed a 5-yard pass to Matthews for the touchdown.

In the end, the Aztecs not only were stymied by penalties – a gift of 105 yards to the Aggies – but also their offense, which failed to convert on 3rd down until the closing quarter.

This story first appeared on Times of San Diego and was made available as part of the CalMatters Network.