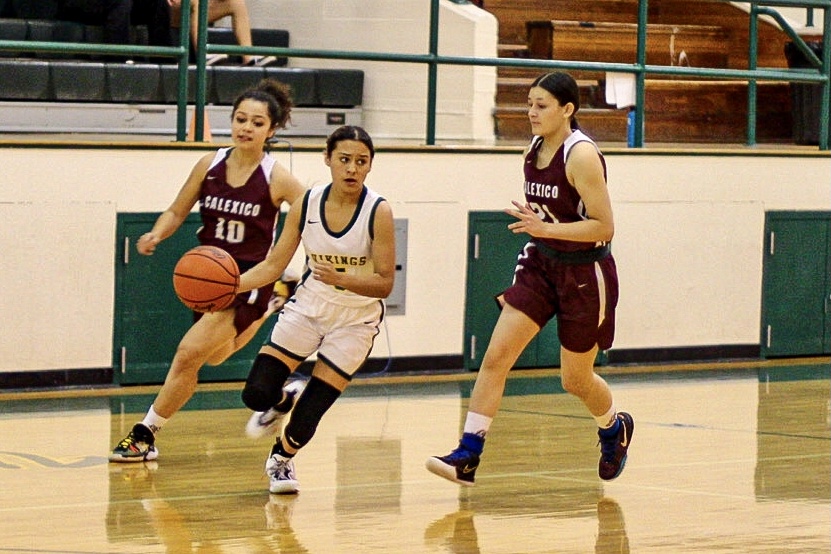 HOLTVILLE — The Holtville High School girls basketball team made it to the championship game of the I.V. Invitational tournament here on Saturday, Dec. 4, before falling to Cibola High of Yuma.

“It was a good chance for all the teams to get plenty of action early in the season and make adjustments as the season goes forward,” said Murray Anderson, Holtville head coach and tournament co-director along with Imperial High coach Rich Ponchione. “There were some exciting games at both locations but in the end I think the best team in the event won the championship.”

In the title game, Cibola jumped ahead of the Vikings 22-7 after the first quarter and took a 35-22 lead into the halftime locker room. Holtville cut the margin to 10 in the third quarter but the Raiders pulled away in the fourth for the win.

Cibola sophomore Sierra Bomhower led the way for the Raiders with 17 points with senior Myna Johnson adding 14. For the Vikings, it was junior Kamryn Walker leading the charge with 20 points, followed by senior Orian Anderson with nine and junior Julia Moreno with eight.

“Credit to Cibola, that is a very talented team and they came out and shot lights out in the first half,” said Anderson, who is in his eighth season with the Vikings. “We had some moments in the third quarter but every time we got close, they would hit a big shot.”

In the third-place game in Imperial, the Tigers defeated Calexico 56-28 behind 25 points from junior Sierra Morris.

In the fifth-place contest, Brawley Union defeated Yuma Catholic 51-47 in overtime. The Wildcats Leandra Castillo hit a three-pointer in the final seconds of regulation to send the game into overtime where Brawley was able to pull out the win.

The Vikings got to the championship with three pool-play wins, downing Calipatria 55-29 in the opener and beating Calexico 65-32 in the finale on Friday, Dec. 3.

Walker had 23 points, nine assists and seven rebounds against the Bulldogs, while Anderson added 16 points and 10 assists. Holtville sophomore Jasmine Garewal finished with 14 points and 12 rebounds.

Early on Saturday, Dec. 4, the Vikings beat Yuma Catholic, 61-57, behind 25 points, six rebounds and six assists from Walker and 17 points and seven assists from Anderson.

The Vikings now hit the road for more than a month as they will play 11 straight road games. Up next is a trip to San Luis, Ariz., on Thursday, Dec. 9, with tip-off slated for 5:30 p.m. in Arizona.