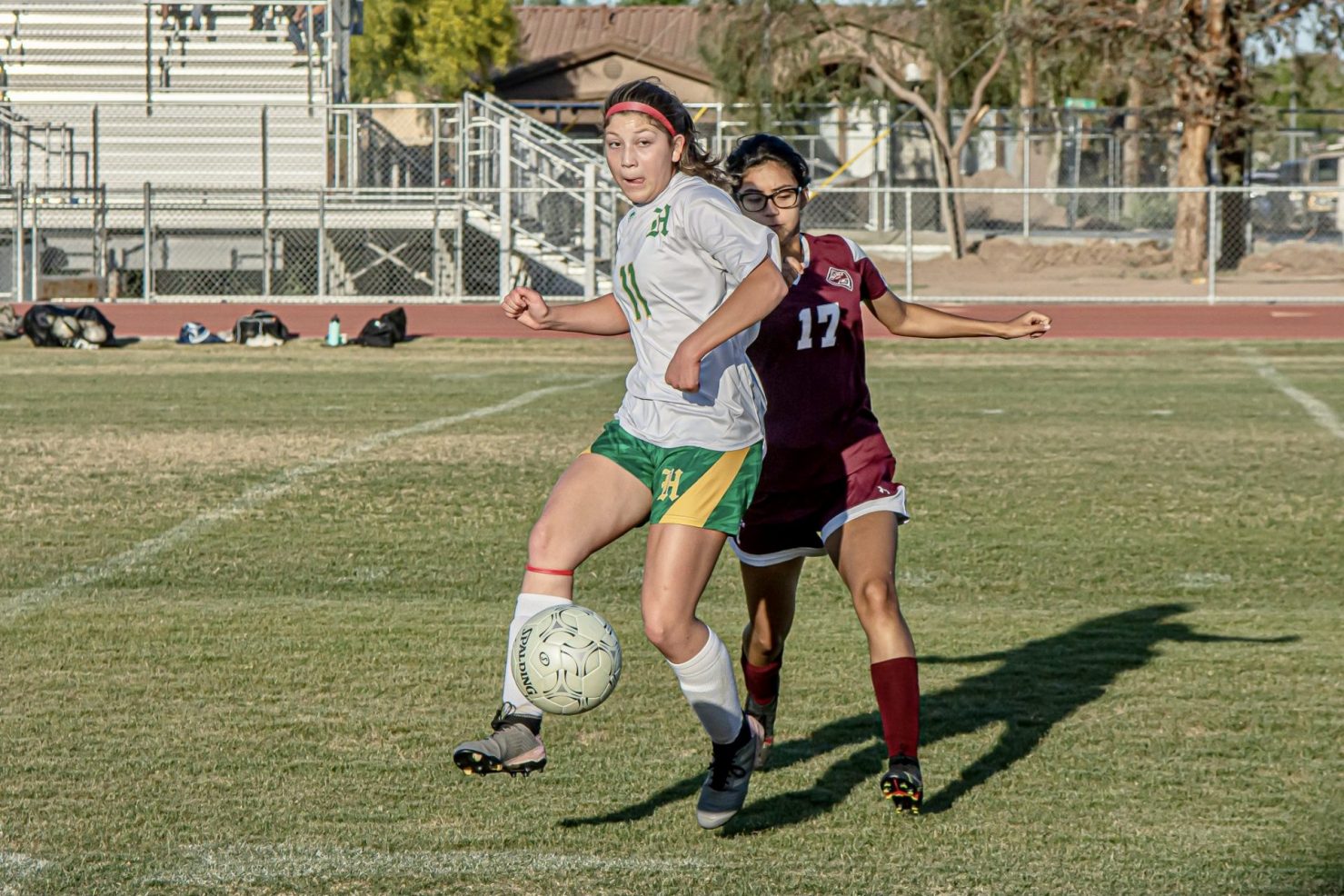 Holtville High School senior Lesley Sandoval gets control of the ball during a game against Calexico in May. Both Holtville and Calexico will be competing in the Martha Arroyo Tournament on Friday, Dec. 10, and Saturday, Dec. 11, at Birger Field in Holtville. | FILE PHOTO
Home
Sports
In Sports

HOLTVILLE — With 10 seniors on the roster, the Holtville High School girls soccer team is going to need that experience as it moves into a tougher league and tougher division come playoff time.

The Vikings (1-2 overall) reached the CIF-San Diego Section Division V semifinals in 2020 and the Division V championship game in 2021 before losing to Orange Glen of Escondido. That success has pushed Holtville into Division IV where much stiffer competition awaits.

With a perfect Desert League record last season, the Vikings have been elevated into the Imperial Valley League this season where the likes of Imperial, Brawley and perennial power Central awaits.

“We just want to go out there and be competitive and not let these bigger teams walk all over us,” said Sadie Ming, Holtville’s second-year head coach. “We’ve definitely got experience on the field as opposed to other years when we’ve had a lot of youth.”

The Vikings replace Southwest in the IVL as the Eagles were relegated to the DL and join Calexico, Palo Verde Valley of Blythe and Vincent Memorial Catholic.

The winner of each league is guaranteed a spot in the CIF-San Diego Section playoffs with other teams eligible for at-large bids to the playoffs in their respective divisions.

“Most of our players have seen it all on the field, from the semifinals two years ago to the finals last year,” Ming said.

“Lesley (Sandoval) is a great leader, a vocal leader and she’s seen it all now in her fourth year on varsity,” Ming said. “She has a lot of good technical ability and she will be anywhere on the field we need her.”

Gasca and Castro will be counted on to do most of the goal scoring for Holtville with the graduation of leading goal-scorer Amanda Strahm.

“We always had Amanda up front and she dominated the ball and these girls had a tendency to watch,” Ming said. “Both have the talent and now they are realizing it’s their time.”

Senior Rachelle Gasca takes care of the centerback position for the Vikings with junior Lauren Ripley also back anchoring the defense.

“Those two work so well together and Rachelle really commands the whole team from back there,” Ming said.

Back at goalkeeper, after missing last season, is senior Michelle Ambrocio.

The Martha Arroyo Tournament features two, four-team pools with the crossover games scheduled for Saturday, Dec. 11, in Holtville. The Vikings are in the pool with Brawley, Vincent Memorial and Calexico while the other pool consists of Imperial, Mountain Empire of Pine Valley, Palo Verde and Southwest.

Holtville hosts Brawley at 3 p.m. on Thursday, Dec. 9, and will also meet Vincent Memorial that same day. The Vikings will host Calexico at 5:30 p.m. on Friday, Dec. 10, at Birger Field in Holtville.