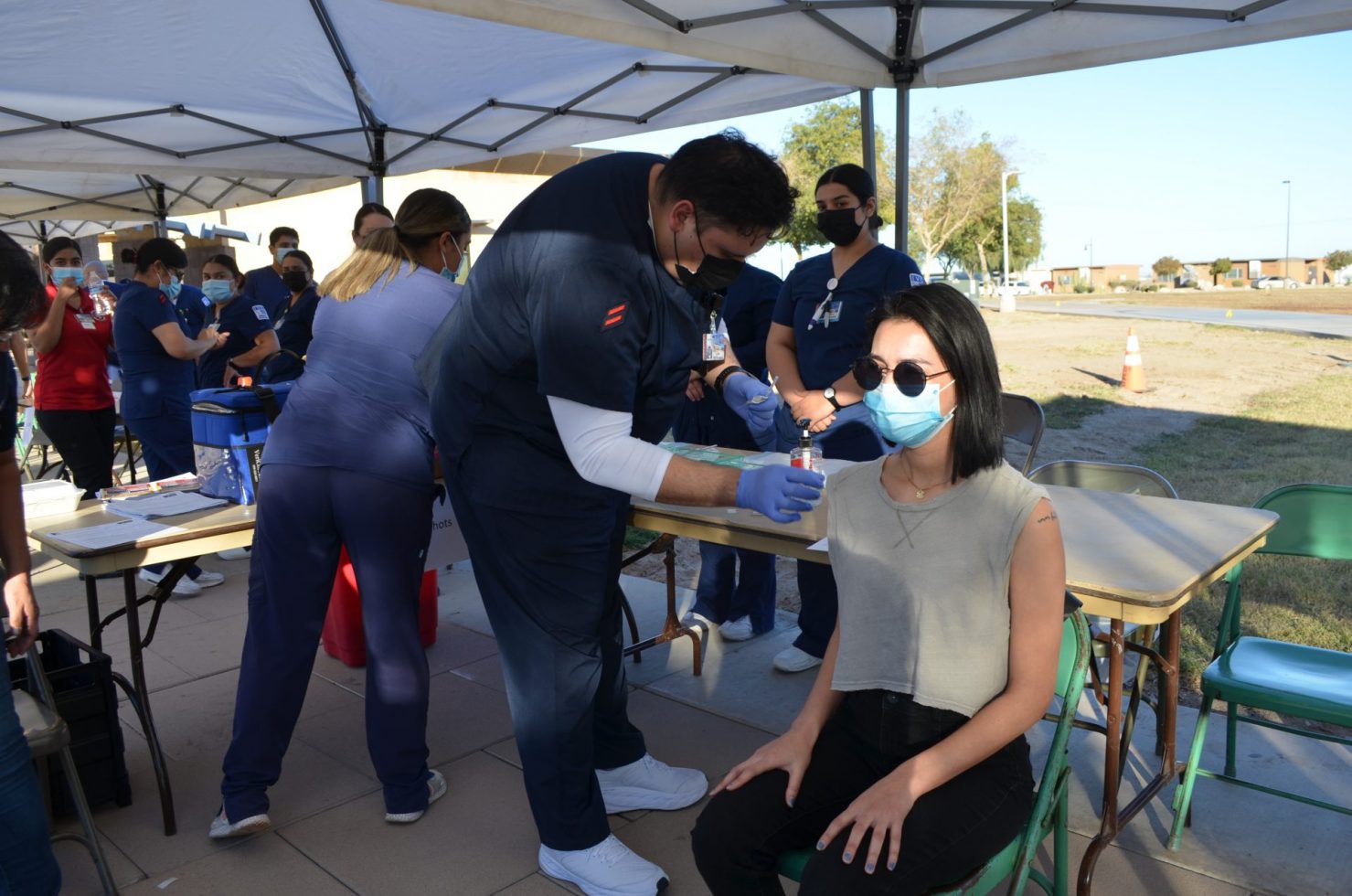 IMPERIAL — The first time that Imperial resident Arturo Guardado got the COVID-19 vaccine was after his employer had notified him of its availability at a vaccine clinic for farmworkers in Calexico earlier in the year.

Though the vaccination wasn’t mandatory to continue working, Guardado said he felt compelled to get it nonetheless because of the large number of farmworkers that had been contracting the coronavirus.

So, when it was announced that a booster shot would be made available for farmworkers during a health fair at Imperial Valley College on Thursday, Dec. 2, Guardado was among the first to take advantage.

“There’s been a lot of cases in the fields,” Guardado said in Spanish. “You couldn’t imagine.”

As a longtime farmworker and native Spanish speaker, Guardado said he had also concluded that his employment status and earnings could benefit if he were to learn English, as well.

So, aside from receiving the booster shot while at the IVC health fair, Guardado also inquired about enrolling in English as a Second Language classes at the campus.

“I’ve noticed that I need to learn English to climb the ranks at my work. Might as well kill two birds with one stone,” he said about his visit to the campus.

Although health fairs have been a staple of campus events, the farmworker health and wellness fair hosted at IVC on Dec. 2 differed because of the entities that partnered together to make it a reality.

Much of the partnership owes its formation to a farmworker vaccination clinic the Vo Neighborhood Medical Center held in collaboration with the Imperial Valley Vegetable Growers Association on March 25 in Calexico, where some 800 farmworkers were vaccinated.

That initial effort and the more recent event were the local Veg Growers Association’s way of ensuring its workforce remains healthy and safe amid the pandemic, said former President Scott Howington.

“This is not the first and only one. This is the first of many,” Howington said about the Dec. 2 event. “Our mission has always been farmworkers, farmworker safety and food safety.”

A desire to improve on the successes of that initial mass vaccination clinic resulted in further talks with IVC and Sun Community Federal Credit Union to expand the services and resources made available for such events.

Sun Community was brought aboard so that it could help promote traditional banking services among farmworkers, who often rely on check cashing companies for their financial transactions.

“As growers, we often think the workforce would benefit from opening bank accounts and having direct deposit rather than cashing their checks daily,” Howington said.

Helping transition farmworkers over to traditional banking services could also make them less of a potential target of robberies by individuals who are aware of the workers’ tendencies to have a lot of cash in their possession, he said.

Melvin Wong, SCFCU member experience manager, said that the credit union would like to be known within the farmworker community as “el banco del pueblo,” or the village’s bank. Building a relationship on trust will be essential to successfully do so.

“We might think we have the right solution for them, but we don’t know until we actually learn from them,” Wong said. “It all starts with them and the more we can help them out the better.”

During the event, SCFCU representatives were on hand to provide information about financial wellness, auto loans, credit cards, as well as the ability to open savings and checking accounts.

The association’s initiative is all the more welcome considering the agricultural industry historically hasn’t been the strongest advocate for its workers.

“When you think of back in the day you really didn’t think about farmers working together with agencies to support (farmworkers),” Sigmond said. “The leadership comes from them.”

Besides COVID-19 vaccines and boosters, the health and wellness fair also provided free health screenings, blood pressure checks and flu shots. Some 500 COVID-19 vaccines were made available during the event, said Dr. Vo.

Nor were attendees limited to solely farmworkers. Imperial resident Jean Armstrong was there to get a booster shot. She heard about the event from her niece, who attends IVC.

She said she was anxious to get her initial vaccination and had found it somewhat challenging to schedule an appointment. For the booster, she was a little more hesitant.

“I just had to convince myself I wanted another needle in my arm,” the 73-year-old said.

Next
Leroy’s Backyard BBQ Ready to Give Back