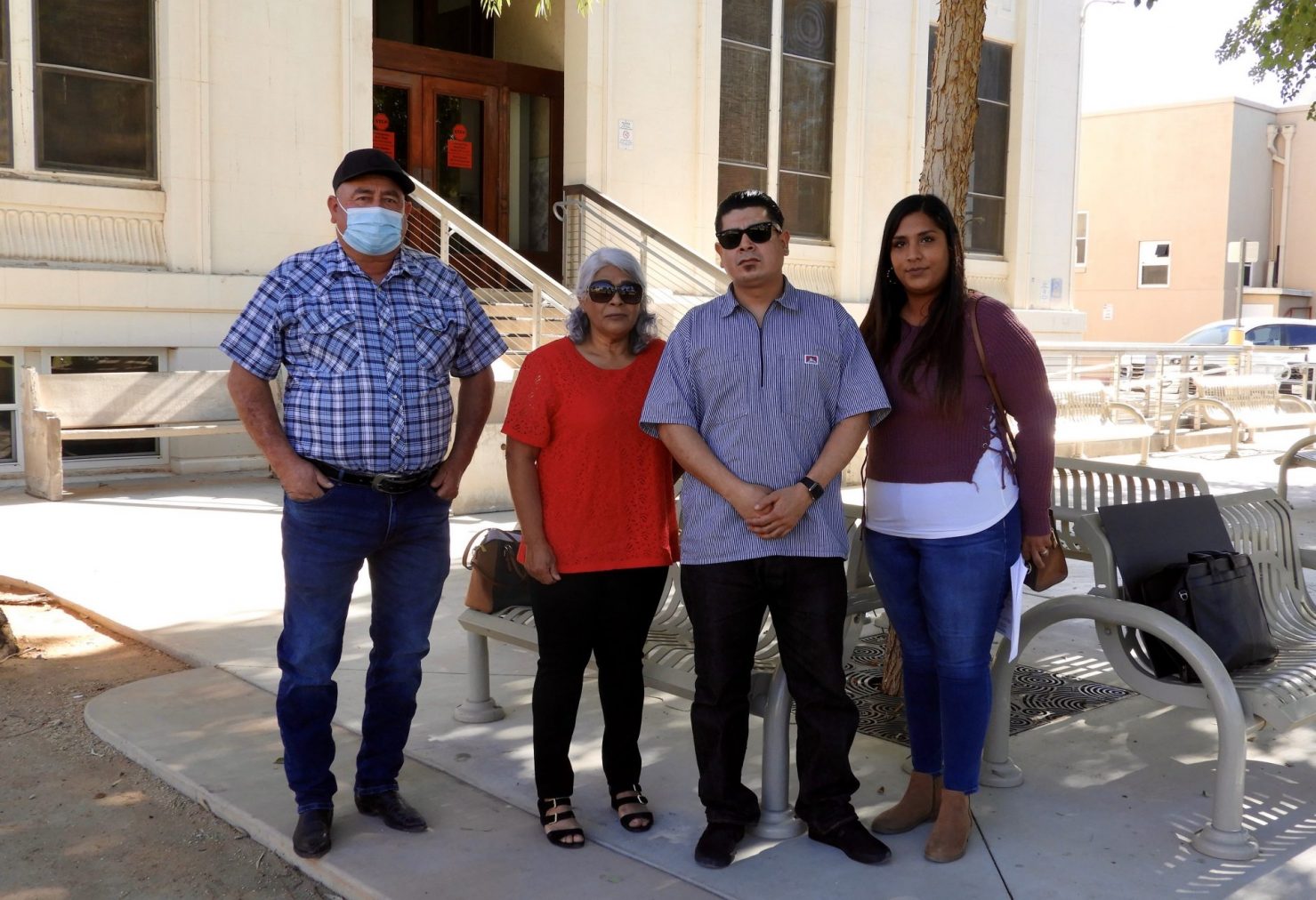 Manuel Orozco (second, from right) of Seeley, his wife (far right), and his mother and father stand outside the Imperial County Courthouse on Monday, Dec. 6, where Orozco’s attorneys had announced a press conference for a lawsuit filed on his and his brother’s behalf and three other men injured in a collision with the late Imperial County sheriff’s Deputy Anthony Redondo on June 26. | MARCIE LANDEROS PHOTO
Home
Public Safety
In Public SafetyRegional News

EL CENTRO — Manuel Orozco of Seeley, his wife, and his parents sat on benches outside the Imperial County Courthouse, expecting to announce the filing of a lawsuit their attorneys had submitted a week ago over a collision that left Manuel’s brother, Andres, with a traumatic brain injury.

Yet no one showed up to the El Centro press conference on Monday, Dec. 6 that their attorneys, Michael S. and Luis A. Carrillo of South Pasadena, had set up following the filing on the suit against the county of Imperial on Dec. 1.

The Orozco brothers and three other men, brothers Sergio and Jesus Ruelas, and Luis Amarillas, all plaintiffs in the lawsuit, were all injured to some degree in the June 26 collision with Imperial County sheriff’s Deputy Anthony Redondo, who died as a result, which according to witness accounts was caused by Redondo.

“I feel as members of the community, I mean, the (Sheriff’s) Department has failed to even see how our family’s doing or how the other families are doing, besides me and my brother, and I’m just disappointed,” Manuel Orozco said, speaking to the lone reporter who attended the press conference.

Noticeably absent was Andres, who spent several weeks in the hospital following the collision, which occurred at dusk on Aten and Forrester roads west of Imperial as Manuel was driving his work crew back to their El Centro shop south of Forrester.

As he drove through the intersection, witnesses at the scene told this newspaper — confirmed by interviews attorney Michael Carrillo’s firm did later — that a county Sheriff’s Office patrol SUV driven by Redondo blew through the posted stop sign on Aten Road and collided with Manuel’s pickup.

Redondo, age 25, was killed when his SUV flipped, and he was thrown from the vehicle. He was responding to a call for service in the Seeley area.

Meanwhile, the impact of the collision sent Orozco’s pickup into a field of Sudan grass, and Andres Orozco and another man, a sixth occupant of the pickup who is not part of the lawsuit but has his own case pending with a different attorney, were pinned beneath the truck.

Andres, 27 at the time of wreck, was the only occupant of the truck to spend an extended amount of time in the hospital, on a breathing tube and sedated for part of his admission in a Palm Springs trauma center before being released to a rehabilitation facility, Carrillo said during a previous interview.

“My brother at the moment, he’s recovering at a small pace, and unfortunately, he’s starting over like a child. It’s been difficult for the whole family to watch him and watch my mom suffering, having her to tend to him and his kids as he once used to tend for his own,” Manuel said on Monday.

Initially his mother wanted speak to the media, but when she tried, she was overcome with emotion. So, Manuel continued.

“Now it’s been the most difficult thing for all of us to see what he’s going through, and, basically, for the actions of the officer, I lost my brother,” Manuel added. “It’s not the same anymore and I don’t think I’ll have him the same ever again. That what’s most painful to all of us.”

The lawsuit assigned to Superior Court Judge Jeffrey B. Jones contains scant information and many place-holding elements, which appears to be fairly standard, but at its core it alleges two causes of action: a general charge of negligence that resulted in multiple “severe physical and mental injuries” and negligence in the supervision/training/hiring/retention of Deputy Redondo.

Only Imperial County is named as defendant, but the suit is drawn up so potential defendants can be added along the way, hence the legal terminology, “DOES 1-20.”

The complaint “demands” a jury trial in the case and a “prayer for relief” for “damages in an amount in excess of the jurisdictional minimum, according to proof,” and for economic and noneconomic damages.

“The dollar amount sought is unknown at this time given the type of ongoing treatment they are all receiving,” Attorney Michael Carrillo stated in an email on Sunday, Dec. 5. “This case is being filed as an unlimited jurisdiction case (over $25,000 in damages sought).”

In essence, the suit recasts what several witnesses told this newspaper at the scene of the accident on June 26, that Redondo was driving at a high rate of speed with no lights and no sirens, running the stop sign and driving into the path of the pickup driven by Orozco, which had five other passengers.

The suit makes no reference to actual speeds or data collected from the SUV’s “black box,” which Carrillo said he made an evidentiary filing for in July.

“We haven’t received the results of the MAIT investigation yet,” Carrillo stated Sunday. “As a result, we were not able to include that data in our complaint.”

Due to the nature of the accident, the fact that a peace officer was killed and litigation was expected, the California Highway Patrol’s highly specialized Multidisciplinary Accident Investigation Team from the San Diego-area Border Division took on the case.

Border Division Public Information Officer Jake Sanchez on Monday, Dec. 6 said MAIT has finished its initial investigation, but the report has not yet been filed and was expected to be buttoned-up in a couple weeks. Sanchez couldn’t say when it would be made public and could not reveal any information about its findings.

As of Sunday, Carrillo said Imperial County had not responded to the filing; defendants have 30 days from service to respond. A clerk with the civil division said the only date tied to the suit is a case management conference set for May 31, 2022, and no sooner date would be set until a response is issued.