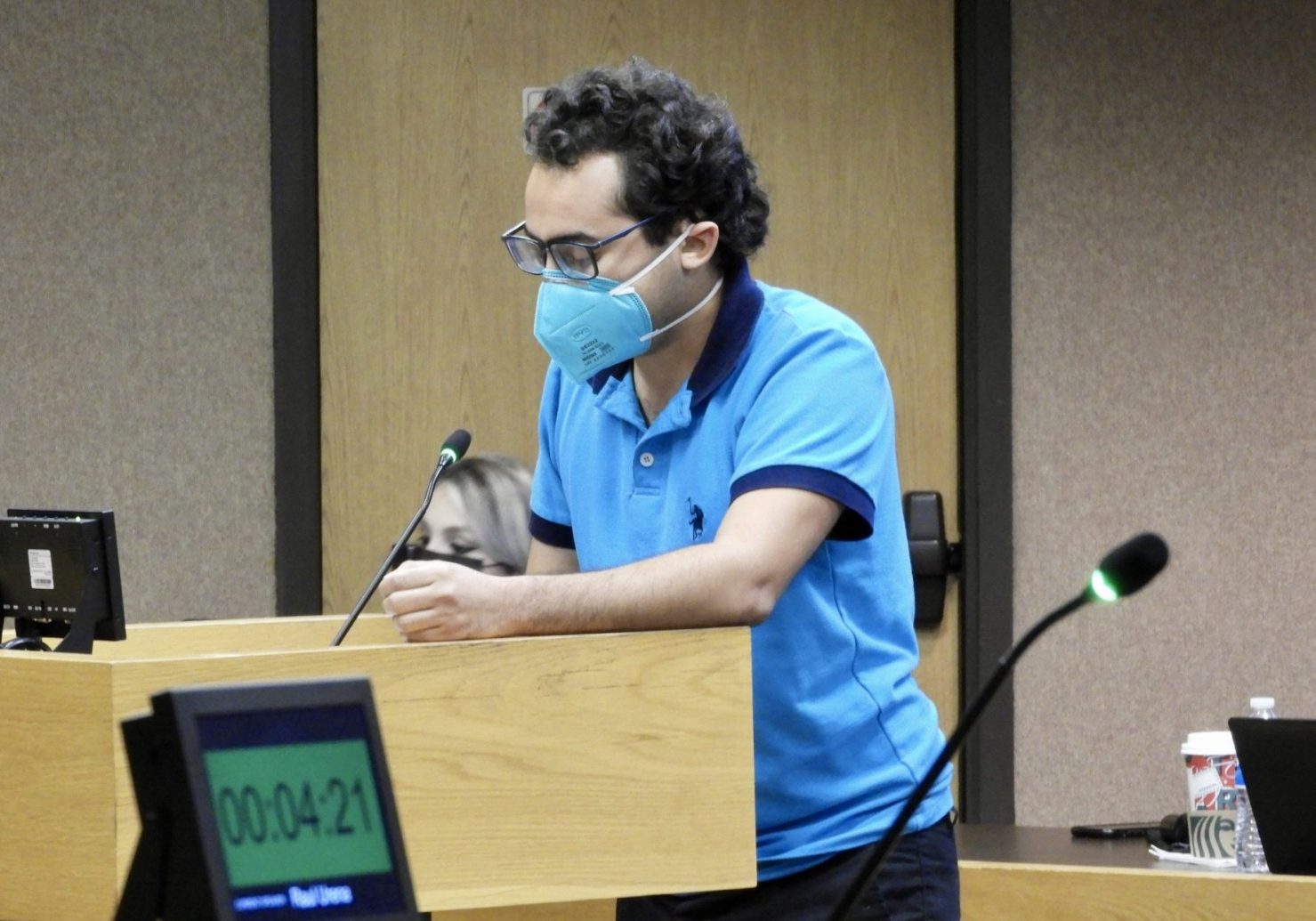 EL CENTRO — Taken at face value, COVID case rates and hospitalizations are nowhere near as bad in Imperial County as they were a year ago at this time, but it’s an unfair comparison due to a different set of factors affecting the local landscape, according to one health expert.

“Last we were actually on fire … we were in a very, very steep climb. We had, I think, 67 (COVID) patients. … But these comparisons don’t make sense because the rise that we’re seeing right now, it’s Delta itself, and we don’t know yet because we don’t have the Omicron identified, but I’m sure it’s here,” El Centro Regional Medical Center Chief Executive Officer Adolphe Edward said on Tuesday evening, Dec. 7, when the hospital stood at 41 COVID-positive admissions with more predicted in the coming weeks.

“But when you have a virus, who finds people that have not been vaccinated, goes inside of them and replicates and gives us a new virus … well, that’s what we have right now,” he said. “I don’t think we felt the effects of the new variant yet. It’s coming.”

On Dec. 7, 2020, there were 122 people hospitalized in Imperial County with COVID-19, according to data from the Imperial County Public Health Department. On Tuesday, the county had that number at 66 people.

That’s one of the reasons two Calexico City Council members have been rattling cages since last week, when they walked out of their own council meeting after the balance of the council wouldn’t entertain Raul Ureña and Gloria Romo’s move to draft a letter to the county to demand a reinstatement of the indoor mask mandate.

The policymakers drafted and delivered their own letter to the Imperial County Board of Supervisors on Friday, Dec. 3, and both unsuccessfully made their cases to the board during public comment at the county board meeting on Tuesday.

Part of their argument was the rising cases and increase in hospitalizations could be helped by masking. Ultimately, its vaccinations, or lack thereof, that are having the most dramatic effect on local hospitals.

What Edward and public health officials have said in recent weeks is that number of COVID admissions is largely made up of unvaccinated individuals, and almost entirely accounts for those in the intensive-care units of El Centro and Pioneers Memorial Hospital of Brawley.

And while there is still a great amount of uncertainty about Omicron and what it truly brings to the table in terms of infections and severity, Edward indicated that epidemiological models continue to show COVID cresting after the first of the year.

“By the 10th of January, we should have reached our max escalation. I hope that we start to turn the other direction, which is less patients,” he said. “But again, we don’t want to hope, we want to plan, and we have planned for an increased capacity.”

El Centro Regional has continued to beef up its medical staff and its capacity, putting up two new tents this past weekend in addition to those already erected more than a week ago. Edward added the state sent four new physicians and new ICU nurses on Saturday, Dec. 4, as well.

“All of that is coming in to help us just in the right time,” said the hospital executive, who explained modeling from the state and his medical staff show at least three more micro surges affecting the hospital before the crest.

“Our numbers have been climbing steadily since the first of October. Nothing has slowed down or stopped. We have more patients on vents (ventilators). Our numbers are not really moving in the right direction, but just for us as a hospital, we’re hopeful that we start to see a decline in the next couple of weeks,” he said.

Even before Ureña spoke, there were people in the room on both sides of the arguments, readying themselves for a showdown on an issue that was not part of the agenda and only took place in public comment.

Brown Bag Coalition co-founder Maribel Padilla opened the discussion, where she spoke as a representative of Planned Parenthood Action Fund and asked the county board to reconsider its Oct. 26 decision to end the mandate early.

“With Omicron going and the holiday a few weeks away, now is not the time to loosen restrictions. While the data coming in from Omicron is still in the early stages, we know that no matter which variant is prevalent, two actions that have been proven and continue to work: social distancing and masking,” Padilla said.

“Masking remains the best tool we have to protect ourselves besides vaccines. As others have shared, our community has suffered more than any other county in the state during this pandemic,” she added. “We need to flatten the curve and ease the burden on our medical community. Again, we urge you to reconsider the indoor (masking) health order.”

Kim Estrada, who was against the mandate and is part of the contingent of Valley residents who spoke at several weeks’ worth of county board meeting that led up to the early end of the mandate, expressed some of the things she has expressed before.

“Never in our history has those who want to force medical interventions on all people been on the good side of history. I have to wonder if those who want to reinstate the mask mandate would consider those who have gone through trauma, abuse, those with serious respiratory conditions who are a greater risk with a mask on, those with anxiety, sensory or processing disorders, or those with who are autistic, or perhaps those who have personal beliefs that will chance the oxygen around them and see better options then (masks) potentially carrying bacteria that can obstruct the flow of oxygen,” Estrada said.

No matter on which side of the issue one stood, it was Ureña himself who arguably was his own worst advocate, clearly turning off county officials by setting parameters on the discussion, to the point where board Chair Michael Kelley was annoyed and refused to grant him the courtesy of extending his comment time.

At one point, like the Calexico council member has seen happen at his own body’s meetings, he asked whether the 50 letters received by the county asking for the reinstatement of the mandate would be read into the record, to which Kelley said no. The chairman said they all said the same thing and it was unnecessary.

Without his concessions, Ureña went on.

“This county woke up No. 2 in the state in COVID infections, three to four times as much as Los Angeles County. When this pandemic started, we said this was a big city issue. But look at how hard it is hitting our rural community? Because this isn’t a big city or a rural issue, this is an equity versus an old, tired structure of white supremacy and racism,” said Ureña. As he paused, a murmur could be heard after those words came out of his mouth.

“We are playing with lives. And we are not just playing with any lives. We’re playing with Brown and Black lives primarily; the people that make this society function,” he said, referring to farmworkers and then other essential workers. “There’s no hero pay in the any municipality in this county. … The political framing on masks is wrong.

Ureña had both detractors and support present on Tuesday. Council member Romo, who herself had contracted COVID, connected via Zoom and had her comments translated. And Kenny Parada, spokesman for the United Food and Commercial Workers Union Local 1176, also spoke.

“With COVID cases at the hospitals up 57 percent in the last two weeks, we are increasingly concerned about what it means for community health. We know that the mask protects communities and especially protects essential workers at the stores and/or place of business,” said Parada, whose union protects the grocery store workers that stayed on the job throughout the pandemic.

“Masks work to reduce the number of COVID cases. All politics aside, we are respectfully asking the board to reconsider an indoor (masking) health order as soon as possible, similar to the one that was removed on Oct. 26,” he added.

The comments about racism that came from Ureña were taken to offense by several people at the meeting, a couple of whom commented.

“I just want to point out that not all farmers here are racist. Some of us are Mexican. And not all of us are rich. I don’t know if you’ve noticed, we’re in California; right now to try getting rich in California, it’s pretty difficult,” said Gilbert Gonzalez, who had spoken during several meetings in which the mandate was being opposed.

There were additional comments on both sides of the issue, but District 1 county Supervisor Jesus Escobar did attempt to explain the county’s actions and is appreciation for the discussion, even if it was not required of the board; supervisors do not have to comment on issue in public comment.

“This is gonna sound crazy, but I actually appreciate the hostility that we have, the passion for what we believe in. Whether you’re for or against, it doesn’t matter, it’s your passion for what you believe. That’s why I’m here. … That’s why everybody is here,” Escobar said.

Next
Battery Storage to Meant to Help Stabilize Solar Energy