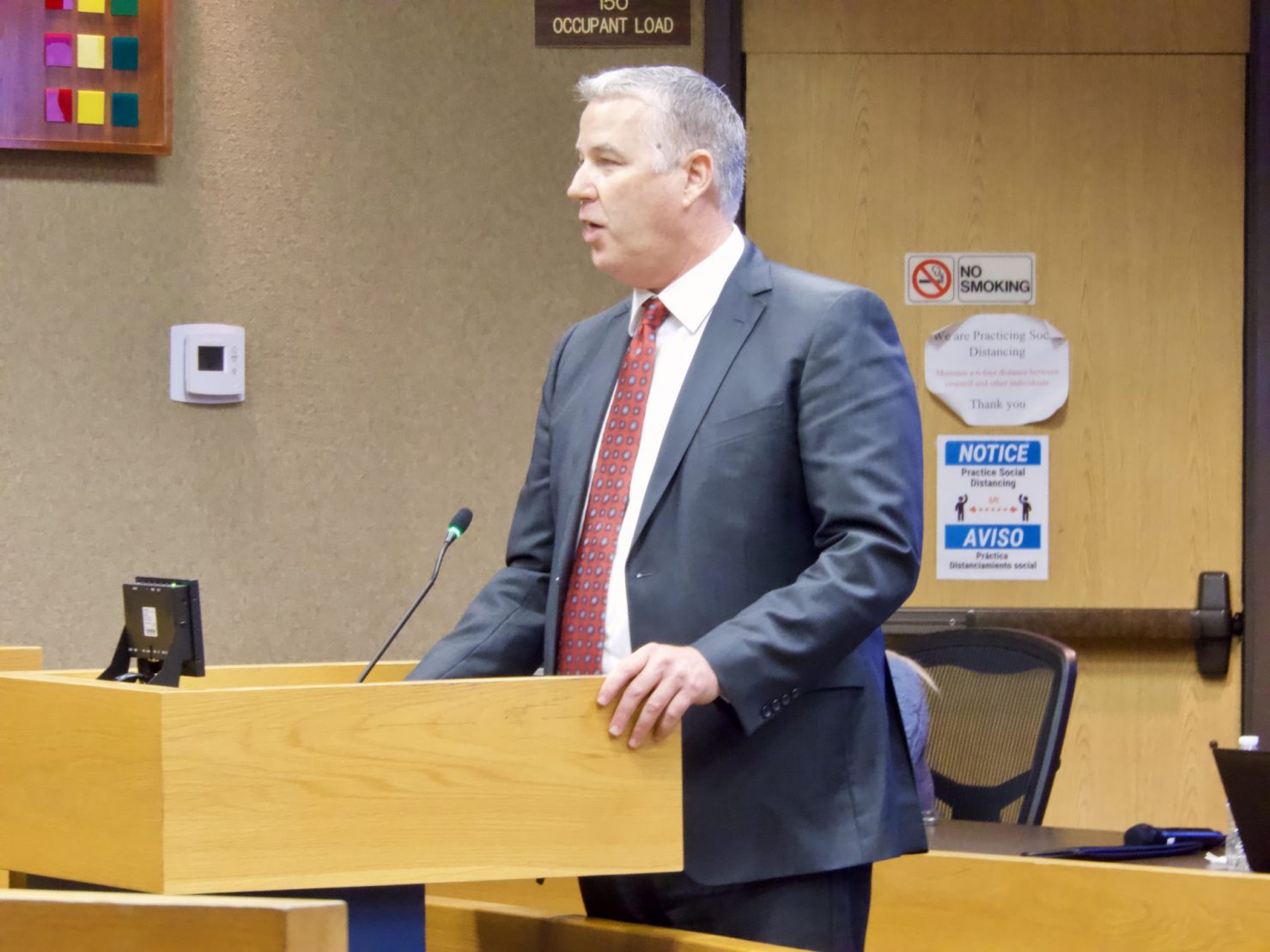 Con Edison Development Business Director Curtis Taylor speaks to the Imperial County Board of Supervisors during a public hearing on Tuesday, Dec. 7, claiming that his firm's Westside Main Battery Storage Project will bring hundreds of construction jobs to Imperial County over the next 10 years. | MARCIE LANDEROS PHOTO
Home
Regional News
In Regional News

EL CENTRO — Imperial County did a little “duck” hunting this week when it took an early step in helping to stabilize the flow of renewable energy with a key approval in the development of a battery storage facility.

The Imperial County Board of Supervisors voted unanimously to grant Con Edison Development a conditional-use permit for its Westside Main Battery Storage Project during its board meeting on Tuesday, Dec. 7.

The development of battery storage amid a push to increase renewable energy production in California is a necessary method to offset a phenomenon produced by solar-energy generation called the “duck curve,” the shape of a line graph that charts daily peak energy demand that occurs after sunset, when solar power is no longer being produced.

The amount of power that must be generated from sources other than solar to compensate for the reduction in energy from solar is universally displayed in the graph as rapid increase around sunset and peaks in the mid-evening hours, producing a graph that resembles the silhouette of a duck.

Battery storage projects in general correct the need to find an alternative energy source after dark, as they will charge during the day, and then continue to supply energy throughout the night.

“We all know, at sundown, there’s no more energy sent to San Diego. But with battery storage, we’re going to be able to continue that,” Imperial County District 5 Supervisor Ray Castillo said during the Board of Supervisors.

Most of the solar fields in Imperial County export energy to San Diego County or to utilities outside the area. The Con Edison project is the private firm to get this far along in the process; Imperial Irrigation District already has a large-scale battery facility in operation.

“We think having a big battery project right there will help with reliability, it will help to integrate future solar projects, and it’s really an ideal location. And these are just some of the project benefits,” Con Edison Business Development Director Curtis Taylor said during a public hearing at county meeting.

The facility will be located along the Westside Main Canal, at Liebert Road, about eight miles southwest of El Centro and five miles north of the Mexico border. The lot for the battery storage facility is also adjacent to one of Con Edison’s solar fields, the Mount Signal Solar Power Plant, which produces 1,200 gigawatt hours of electricity a year.

“The project proposes to utilize 163 acres in total, the actual facility will be on 148 acres is proposed a 2,000-megawatt standalone solar renewable energy battery storage facility,” Taylor said as he began to describe the nature of the project.

The project will rely on a mixture of lithium-ion batteries and flow batteries, but according to Taylor, Con Edison is moving toward using the flow batteries, which stores energy in liquid chemicals that flows around a cylinder, as much as possible. Con Edison’s plans also call for a new on-site 230-kilovolt loop-in station, to connect the station into the already existent power infrastructure, a 34.5-kilovolt to 230-kilovolt substation, and a new clear spanning bridge across the Westside Main Canal, which will be private but with access granted to public safety responders.

This project is scheduled to be built in phases that span the next 10 years, beginning with the bridge. Taylor estimated the project would bring hundreds of construction jobs during that time, but the facility will only require five to 10 employees once the facility is complete, though more could become necessary as the project grows.

“In terms of construction, we think the first phase, because it will involve this clear spanning bridge over the Westside Main Canal, could be an around 200, or so, construction workforce. And then depending on the size of future projects, and the pace at which we need to construct the project, construction workforces could in the 75 to 100 range, on ongoing basis,” Taylor said. “We indicate here, creation of five to 10, highly skilled, permanent full-time jobs. Could be more than that, depending on how much the project is ultimately build out.”

While no opponents to the battery storage facility were in attendance during the meeting, the International Brotherhood of Electrical Workers Local 569, a union that represents more than 3,700 power professionals in Imperial and San Diego counties, sent their environmental organizer, Cristina Marquez, to show their support of this project.

“We have a long history of supporting sensible and environmentally sound renewable energy development in the Imperial County. And battery storage is a critical next step in moving our state away from fossil fuels, and towards putting solar wind and geothermal energy onto the grid,” Marquez said. “These battery storage projects bring good-paying union jobs, local hiring requirements, training, and apprenticeship opportunities into the area, while furthering our state’s ambitious climate action goals.”

Around a half dozen county employees spoke out in protest against the changing of county Ordinance 3.08.250 – Holidays, which defines who has the power to define whether a federal holiday is a paid holiday. In the current language, all federal holidays are paid holidays, but the new ordinance would have that decision become at the sole discretion of the Board of Supervisors, causing county employees to fear that they may lose any future holiday.

The county board quickly clarified its position on the ordinance, explaining the intention was to protect the county and to guarantee county services continue, should the Governor or the President announce a new state or federal holiday with no warning, as President Biden did with Juneteenth this past summer. Ultimately, the board ordered the ordinance to be rewritten again, to clarify the board’s intent and to protect employees’ rights to future holidays.

“As a former county employee, I know the importance of holidays, and the real importance of unexpected holidays. As long as I’m on this Board of Supervisors, I will fight as long as I can to ensure that every county employee is afforded the holidays when they become available,” said District 3 Supervisor and board Chair Michael Kelley during the meeting.

The board approved the purchase of four new type 1 fire engines, which are the standard fire engines that are equipped with everything necessary to fight urban, rural, and suburban fires, including the ability to go “off road” to fight fires in undeveloped areas, like the areas around the New River, which has experienced several fires over that last few years.

The need for the new fire engines is great due to the age of the other engines in Imperial County, Fire Chief Alfredo Estrada Jr. said on Tuesday. The county has a total of 17 engines, and of those, 13 are more than 10 years old, making them past standard retirement age for fire engines, thus at higher risk of catastrophic failure, Estrada said, which could put the safety of the public and firefighters at risk.

While the cost of the four engines is $2,147,418, there will be no impact to the county’s general fund, as three of the engines, a total of $1.8 million, will be paid for through the $35.2 million in funding the county has received as part of the Coronavirus State and Local Fiscal Recovery Funds.