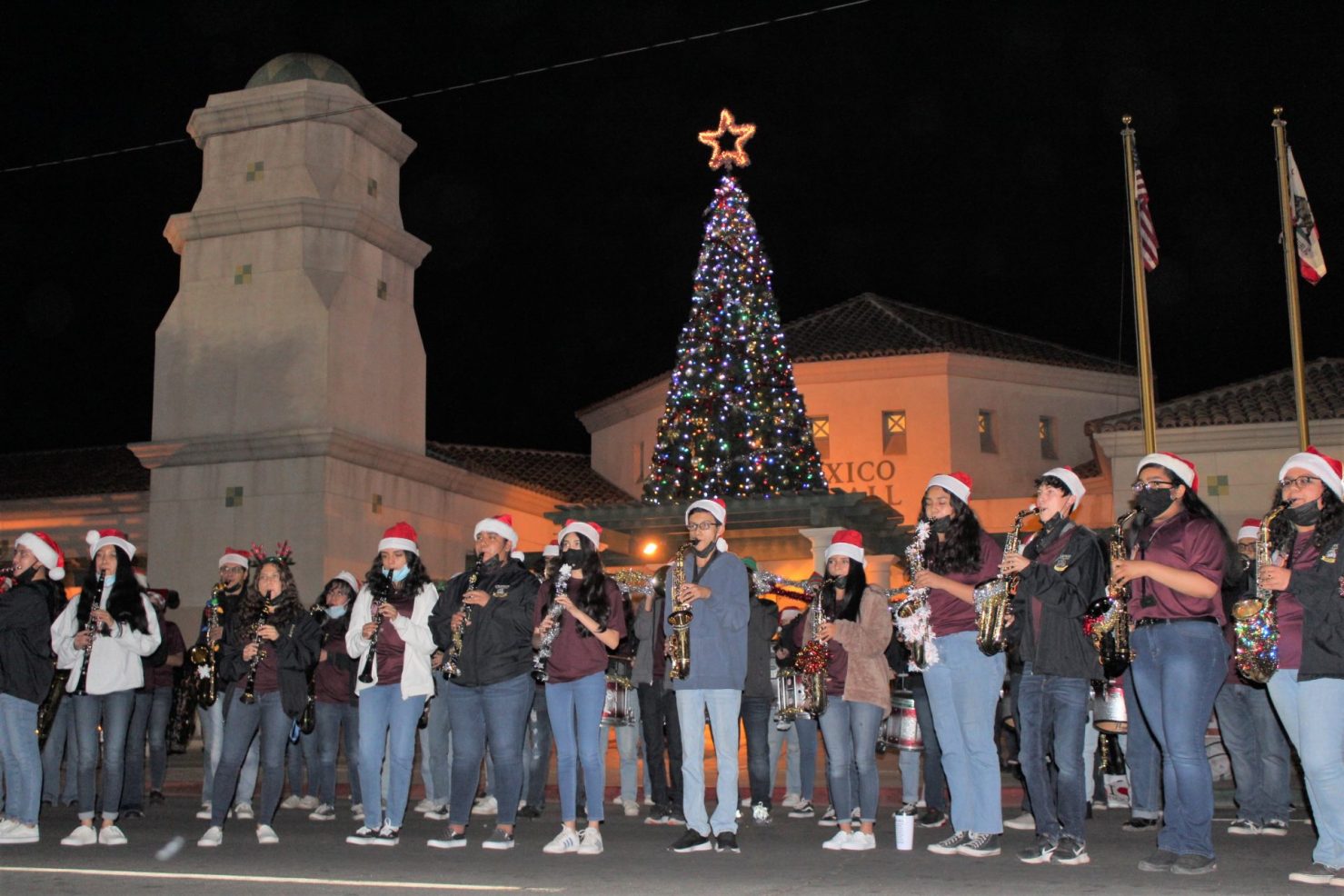 Calexico High's Bulldog band performs in front of City Hall with the city Christmas tree lit up Tuesday night, Dec. 7. After a lowkey celebration in 2020, the city returned to a community-wide celebration with snacks, music, and Santa Claus on Heber Avenue. | KATHERINE RAMOS PHOTO
Home
Regional News
In Regional News

CALEXICO — An annual tradition returned to Calexico this year, gathering friends and family in the community for the lighting of the Calexico City Hall Christmas tree on Tuesday evening, Dec. 7.

Serenaded by the Yuletide sounds of the Calexico High School Bulldog band with performances by the CHS drill team, flags, and shields, a blinged-up Santa Claus was there to greet all who came out in his red sequined suit. Santa and the Calexico City Council members started the countdown to light up the large tree that sits above City Hall.

City Manager Miguel Figueroa said the city had wanted to do something to get the community in the seasonal spirit. The COVID pandemic has made it difficult to host the usual, rich Christmas events Calexico normally has, but the city wanted to still have at least one tradition.

“Families are gathering, people are coming together with government officials; this is what we want to do. We want to make sure we bridge our community with what happens at City Hall,” Figueroa said during the event.

Mayor Pro Tem Camilo Garcia said the tree lighting gave the city a chance to have a sense of normalcy in the midst of the pandemic, and the city was happy to have provided that. Last year there was short tree-lighting ceremony inside City Hall before a council meeting that was posted online.

During a few remarks to the community members gathered, Garcia said he understands there has been a lot going on this year with the pandemic, but he said now is the time to give thanks and to celebrate with seasonal cheer.

“This is just something that was good for the community. The community came out, they had a lot of fun, we had good performers like the band that brings so much pride and joy to our community,” Garcia later.

Attendees were treated to hot coffee courtesy of Starbucks along with hot chocolate and champurrado. Cookies and pan dulce were provided by Paneria Karen. Nearby, the Camarena Memorial Library, WomanHaven, A Center for Family Solutions, and Imperial Valley Regional Occupational Program had information booths set up with freebies and bags of books in the case of the library. Volunteers from the city worked alongside students from Calexico High’s Asian Pacific Youth Leadership Club.

Calexico residents and visitors from other towns were happy to see something festive happening in the city.

Calexico resident Maria Mendoza brought her daughter, 6-year-old Victoria Alvarado, to see Santa and just to be around the festivities.

“This is really good for the community, especially after the COVID that was hard on people, but right now I think it’s good to share with the people again,” Mendoza said.

“My favorite thing at Christmas is Santa,” Victoria said after she got to take a picture with him.

“I like everything that the city does for the community,” Calexico resident Lorena Ramos said. “I look forward to being together with my family and being thankful for being with them.”

Veronica Martinez was a visitor from El Centro and was happy to see an event happening that she could take her children out to see.

“We are excited to know that things are going on,” Martinez added.

“I find it all special. We’re a small town and it’s nice that we get to do something special,” said 17-year-old Tiffany Campos, a member of the CHS drumline. “It felt really good to perform.”

Mayor Pro Tem Garcia did say he hopes the community will continue to be safe during seasonal celebrations.