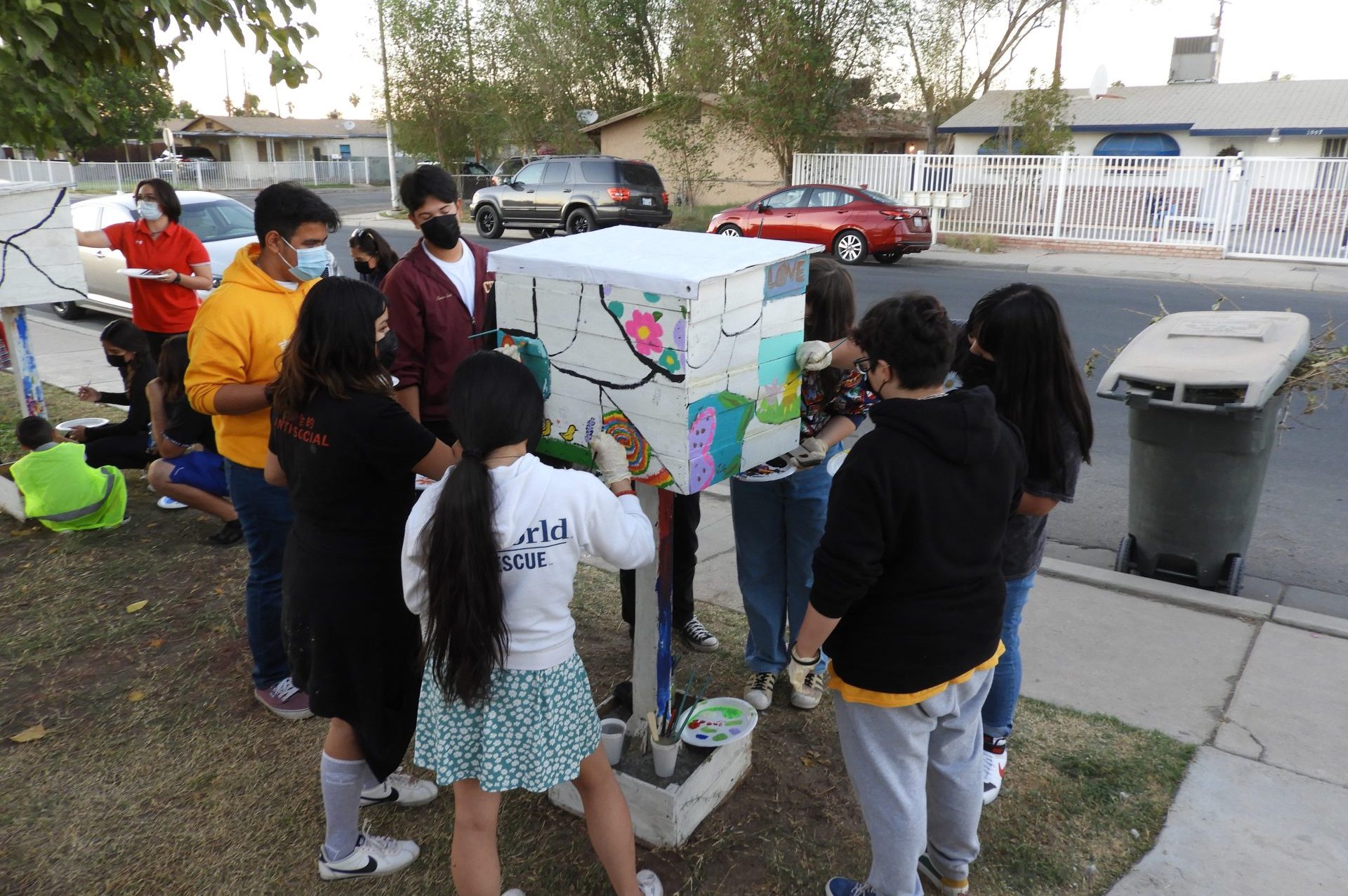 Members of the Asian Pacific Youth Leadership Club of Calexico High School surround a community library being installed at the Calexico Housing Authority office on Friday, Dec. 3, by Calexico Needs Change. The teens were volunteering their time by painting it bright colors to support their community. | MARCIE LANDEROS PHOTO
In Regional News

Community Library at Housing Authority is One Piece of a Larger Project That Includes Community Fridge, Upcoming Garden

CALEXICO — A grassroots group dedicated to making Calexico a better place implemented the latest phase of its “Holistic Wellness Project” recently by installing a community library in front of the Housing Authority office on Fifth Street.

Known as Calexico Needs Change, the band of young community-minded activists is also known for its community fridge effort that has placed a refrigerator out in the community in which those in need of a meal or hydration can do so for free.

“The Community Library Project is basically your simple ‘get-a-book, take-a-book, give-a-book, take-a-book,’ where you can go to this library and get a book, any book that’s in it,” Calexico Needs Change founder Ismael Arvizu said while the library was being installed on Friday, Dec. 3. “And whenever you can, or feel like it, you can go return it or give a new one. So, it creates a nice — what’s the word? — ecosystem of books circulating through between the libraries and between households.”

The library will consist of two wooden boxes, each set atop a pole, with a door on the front for access within the box, which will be filled with books. The library is open to all members of the community, with no restrictions or hours of operation.

Arvizu said the goal is that the library will be maintained by the community at large without the need for lasting oversite.

One group made a particularly strong showing, the Asian Pacific Youth Leadership Club from Calexico High School. Seventeen-year-old senior and club President Kelly Li said the club had almost of its executive board attend, all volunteering to help the community.

“We saw, like this (Instagram) post about it on one of Calexico Needs Change posts. And we just decided, it’s like something fun that we could do all day, and they are going to be giving out books to the entire community,” Kelly said during a breaking from painting.

The library couldn’t have been installed without the support of the Calexico Housing Authority, which allowed the library to be placed in front of their offices. Teri Nava, the executive director of the Housing Authority, attended the installation, bringing her preschool-aged grandson with her to help decorate the library.

“The Calexico Needs Change approached my board of directors, and they directed me or asked me to participate to bring literacy to our community at the Housing Authority, so it’s a really exciting day,” Nava said. “I’m really excited to see this many children show up and be a part of this. And I look forward to it being a positive output or, you know, input for the children here in our community and the adults as well.”

The library is only one aspect of Calexico Needs Change’s more expansive Holistic Wellness Project. This larger project focuses on improving the “wellness” of Calexico residents by feeding not only their minds but their bodies.

“And for the mind to improve, the (goal) is to like help students, or children, or anyone else be introduced to new forms of literature, and that sort of stuff. So, it’s mixed because you can’t have a healthy body or only a healthy mind,” he said.

“We opened it in April, late April, I think, or early to mid-April, but point is, we started with the Hope Cafe, we put it right next to it, in the parking lot. That’s right next to the D’Polys (Taco shop). And it was a huge success, where we would dump $40 or $50 worth of food every day. And the community will come and use it up,” he said. “They’re there to drink water, they’re there eat bananas, and to take the bread. Many times, people would bring their own food, like someone would cook pasta or buy some something I’d hope and just leave it right then and there.”

“I came out here because something really special is happening in this community, and it’s happening in one of the hearts of the community. This group, you know, Calexico Needs Change, is bringing something that is so important. They really are bringing something special to the community in a way that is making accessible things that should be accessible to all in our community,” Flores said as she began to paint a book on the library.