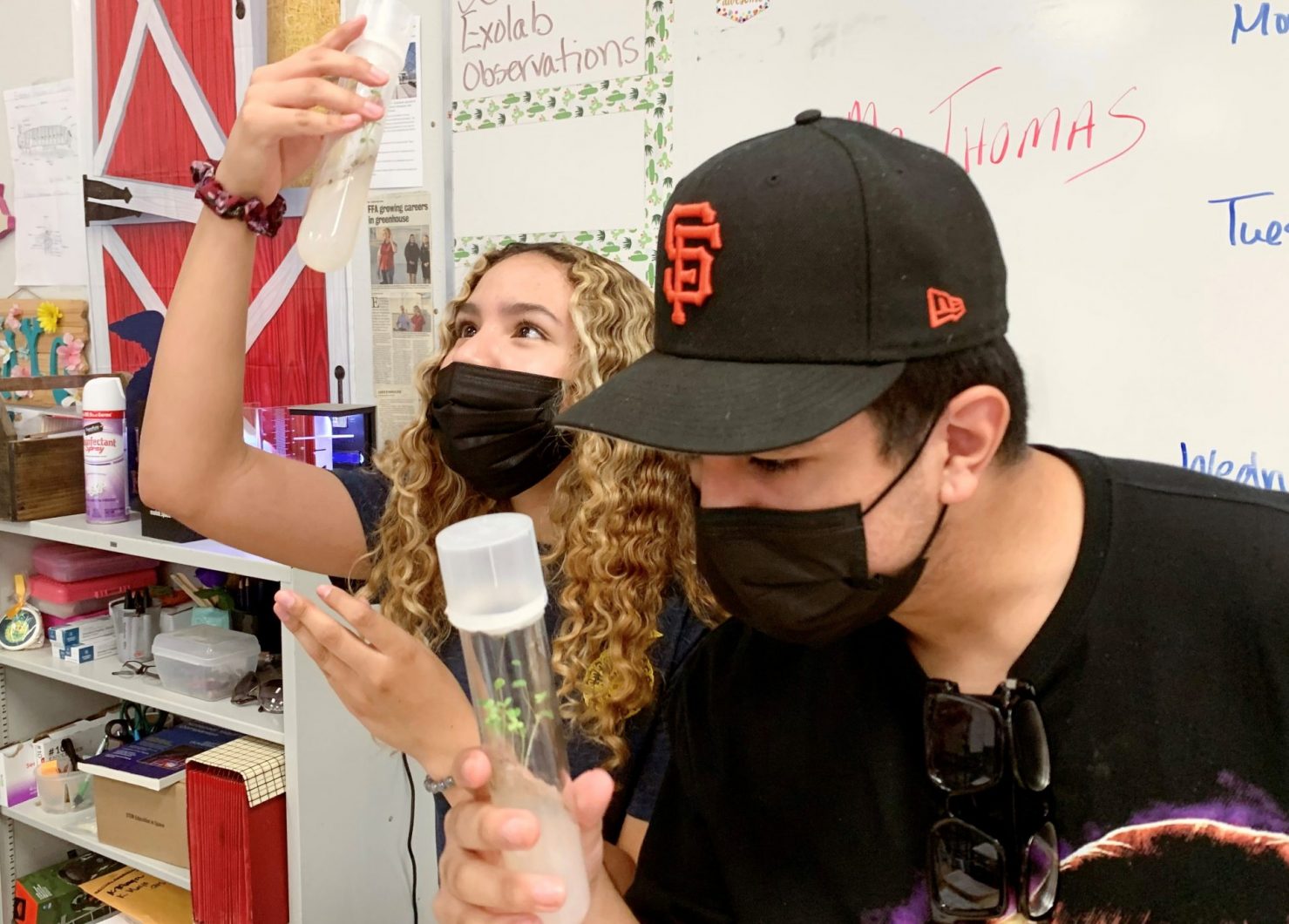 Southwest High seniors Daniela Bastidas (from left) and Joseph Montaño, members of the El Centro FFA chapter, make their last observations for signs of nodulation inside of their ExoLab-9 kit on day 30 of the experiment. | EL CENTRO FFA CHAPTER PHOTO
Home
Agriculture
In AgricultureEducation

EL CENTRO — All the way down in the sunny Southern Region, the Advanced Interdisciplinary Science of Sustainable Agriculture (AIS) students of the El Centro FFA chapter (Southwest High School) took part in a mission to investigate the effect stress of spaceflight has on the symbiotic relationship of legumes and nitrogen-fixing Rhizobia bacteria.

Brought to you by Magnitude.io, the ExoLab-9 is an experimental platform that brings together classrooms and the International Space Station in a collaborative investigation of the effects of microgravity on living things. ExoLab-9 takes project-based learning to a new level as a mission-based experience igniting students’ passion for space exploration as well as environmental stewardship on Earth.

As mission participants, El Centro’s members grew red clover legumes (Arabidopsis) in the 1G (normal gravity) environment of Earth as part of the ground control experiment, while comparing results to the flight experiment in the microgravity environment of the ISS. In essence, the ExoLab-9 sets out to answer the question: can nodulation occur in outer space?

Microgravity environments enabled by the ISS provide a unique opportunity to study the symbiotic relationship between the roots of leguminous plants and nitrogen-fixing bacteria. The nodulation that occurs on Earth is a necessary component to healthy soils and the process will need to be replicated in microgravity to support the future of space travel. On Aug. 28, the ISS launched the SpaceX-23 rocket into space with the Exolab-9 containing 15 red clover seeds aiming to confirm the possibility of root nodulation during spaceflight. Before the launch of the ExoLab-9 from the ISS, El Centro’s AIS students worked diligently for weeks preparing their ExoLab-9 kits for their very own “launch” from the classroom in order to follow the same timeline of the ExoLab-9 kit in space.

In preparation for the launch of their own ExoLab-9’s, El Centro’s students created a special gelatin media called agar for their growth chamber tubes which the red clover seeds grew within. The agar provides the plants with all the water they need and the agar gives the roots something to hold on to. Students placed the red clover seeds at the very surface of the agar and spaced them out evenly to take precise observations.

El Centro’s agriculture teachers, Mrs. Mayo and Mrs. Abatti-Fitzurka, set the light settings to low white light to begin the experiment on Sept. 1. Students had the opportunity to experiment with different colors of light, intensities of light, or longer or shorter photoperiods by setting one tube using the recommended settings and the other with the lighting “recipe” of their choice. The ExoLab-9 enabled El Centro’s students to dive deeper into the surface of their experiment and stay curious, asking questions such as: Why are the seeds in one test tube growing at a faster rate? What is occurring nodulation in one test tube and not in the other? Or, what can I revisit and revise to make my results data more measurable and qualitative?

On Oct. 1, El Centro’s AIS students took their final nodule observations, unassembled their ExoLab-9 kits, and stored them in their ag classrooms for future students to conduct the experiment in the following years. Majority of members counted 25-30 nodules in each test tube. As a result of the flight experiment, the astronauts and El Centro’s students concluded that nodulation did not occur in the ExoLab-9 kit in outer space.

The ExoLab-9 not only allowed El Centro’s AIS students to be part of a groundbreaking research mission, exploring growing leguminous plants in space, but to dive into the future of agriculture sustainably here on Earth while studying nitrogen fixation.