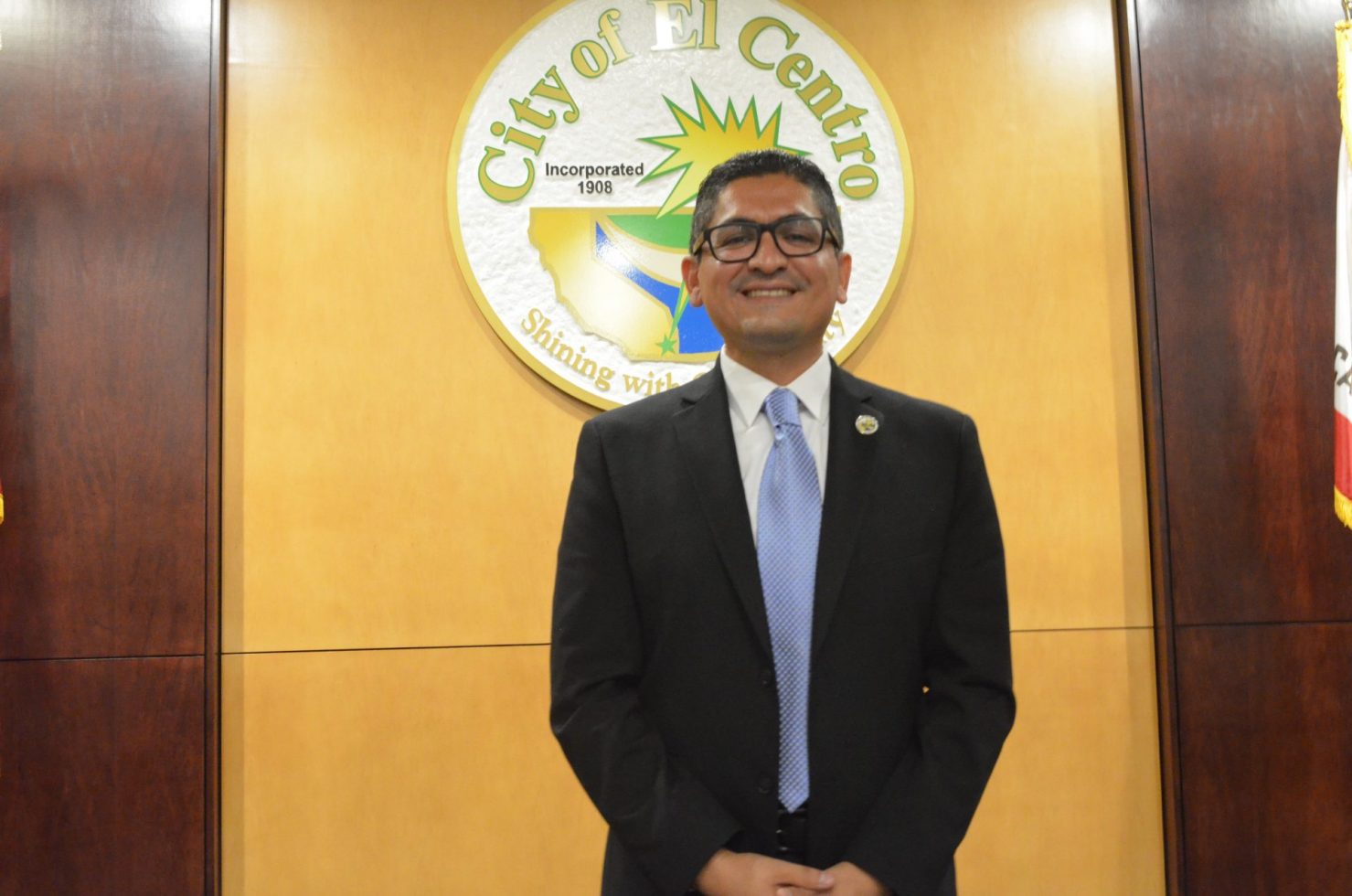 Newly appointed El Centro Mayor Tomas Oliva said the hardships that his family had encountered when he was young helped shape his professional and political aspirations. He was appointed during the annual reorganization ceremony on Thursday night, Dec. 9. | JULIO MORALES PHOTO
Home
Regional News
In Regional News

The occasion took on added significance coming amid the ongoing COVID-19 pandemic, which figured largely into the events of the past year and is expected to do so in the year to come.

“We not only survived, we thrived,” Viegas-Walker stated in her final remarks as mayor. “And that’s because all of you and your commitment.”

“For those that we have lost and for those of you that are still here, I hope I make you all proud,” Oliva said is his first remarks as mayor. “And I look forward to working with my colleagues in the upcoming year.”

The reorganization marked the end of a sixth mayoral term for Viegas-Walker, who was initially elected to serve in 1997, and a first for Oliva, who was elected in 2018.

The reorganization also resulted in council member Martha Cardenas-Singh being unanimously selected as mayor pro tem by her colleagues on the dais.

Because of the way the position of both mayor and mayor pro tem rotate on an annual basis, that position was scheduled to have fallen to council member Edgard Garcia.

Instead, Garcia announced during the meeting that he was removing his name from the rotation because of his pending commitment to his campaign for county district attorney.

He said he was doing so after much deliberation with his family and with the support and blessing of his fellow council members. His name would go back onto the council’s rotation for 2023 should he not be elected as district attorney in June 2022.

Upon being selected as mayor pro tem, Cardenas-Singh thanked the council for entrusting her with the responsibility.

“It truly is an honor and a privilege, and I look forward to learning from my colleagues,” the first-term council member said.

Prior to the council’s reorganization, Cardenas-Singh also personally thanked Viegas-Walker for empowering women to seek public office, for being an inspiration, as well as for her more than 20 years of public service.

“You truly take the opportunity to guide and support us through the process, and I have learned a lot from you this year,” Cardenas-Singh said.

First-term council member Sylvia Marroquin also thanked Viegas-Walker for her guidance during a challenging year, and for her tenacity and graciousness, which Marroquin described as being the qualities of a true leader.

“As I sit here next to you, I’m constantly in awe of the things that you think to ask,” Marroquin said.

Aside from serving as mayor in 2021, Viegas-Walker also spent the year serving as board president of the League of California Cities.

It was in that capacity that fellow League board member and City Council member Garcia saw Viegas-Walker command the respect of the league’s board members from throughout the state, no small feat when one considers the representatives who hail from large metropolitan areas.

Her composure and ability to rally stakeholders when she is at a loss to provide assistance is commendable, too, he said.

“That right there is the measure of a good leader,” Garcia said.

As parting gifts, Viegas-Walker was presented with a plaque adorned with a wooden gavel from the City Council, a second plaque from the Imperial Valley Regional Chamber of Commerce, a binder containing the 2021 highlights of the city’s progress from City Manager Marcela Piedra, and a crystal from El Centro Regional Medical Center Chief Executive Officer Dr. Adolphe Edward.

She was also presented certificates of recognition from the offices of Congressman Juan Vargas, state Sen. Ben Hueso and Assembly member Eduardo Garcia.

During her outgoing remarks, Viegas-Walker checked off a number of initiatives that the City Council successfully completed during the year, including the formation of separate task forces to address homelessness and help revitalize the downtown, as well as update and approve the city’s five-year strategic plan.

She made it clear that those successes represented collective efforts that the city’s staff deserve equal credit for.

“It’s been an honor of my public life to serve El Centro,” Viegas-Walker said. “And certainly, my heartfelt thanks for giving me that privilege.”

Upon assuming the mayorship, Oliva told a story about a young boy who grew up in El Centro under hardship but who was able to go onto to pursue a higher education and a professional and political career because of the examples set by his parents.

“That young man gets to be the mayor today,” Oliva said.