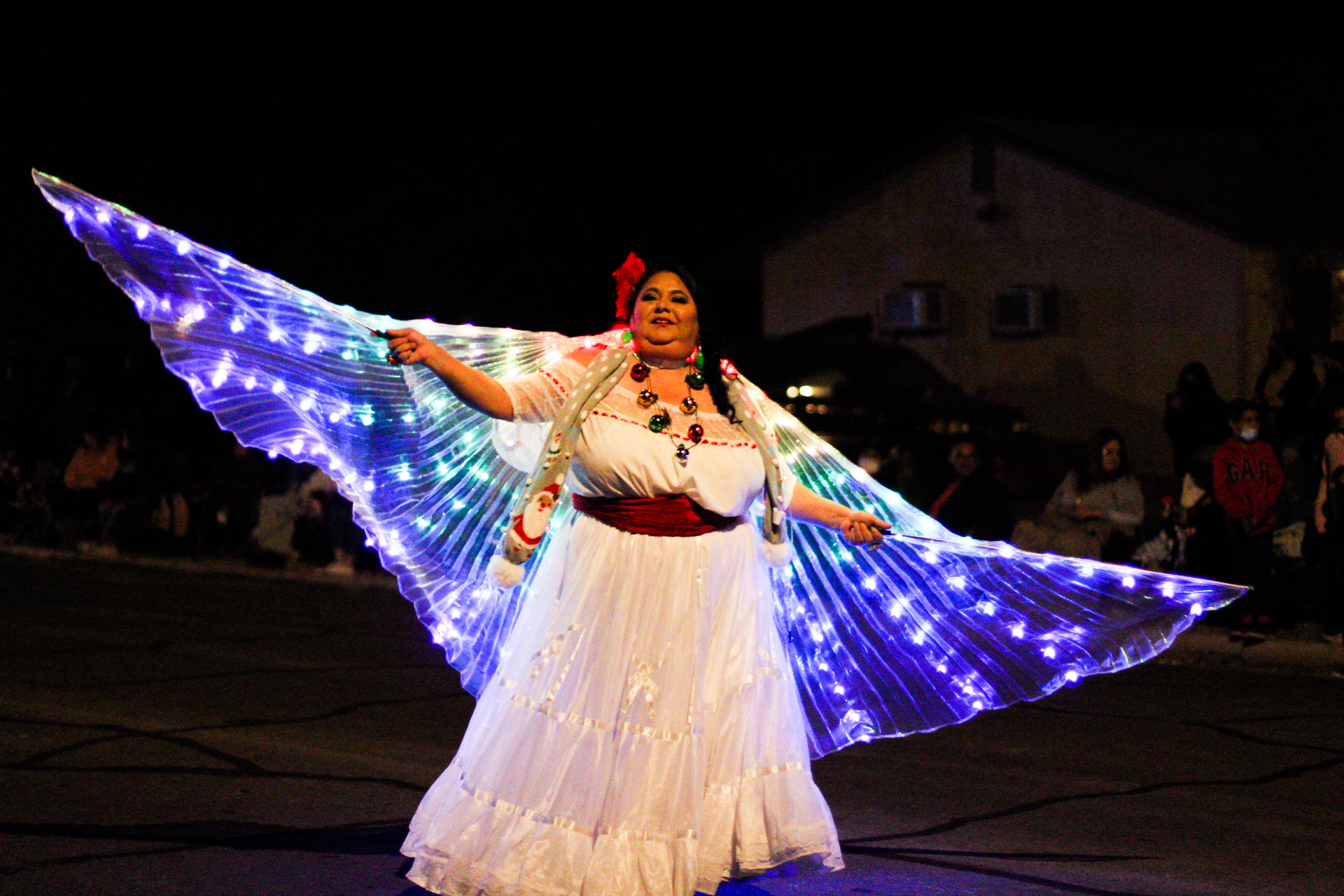 A member of Ballet Folklorico Danzas Mexico twirls her shawl adorned with white lights, almost looking like an angel, during the city of Imperial’s Parade of Lights on Friday night, Dec. 10. The light parade returned after a year hiatus due to COVID. | MEGAN JONES PHOTO
In Regional News

Imperial Lights Up the Night

IMPERIAL — Imperial’s Parade of Lights made a triumphant return on Friday night, Dec. 10, bringing thousands of Imperial Valley residents together to celebrate the holidays with a luminescent display of spirit nearly the length of Imperial Avenue.

“The city of Imperial is so excited to welcome back the Parade of Lights. This is the 18th annual parade. … We would have obviously had the 18th annual in 2020 had that worked out, but we had a great turnout this evening,” said Imperial’s assistant city manager, Alexis Brown. “We’re estimating our crowd to be between six (6,000) and 7,000. And we had 74 entries all together, and everyone just had a great time.”

The ongoing pandemic, which was experiencing a surge during last Christmas season, shelved most annual celebrations. Yet with the development of a vaccine, the lifting of the mandates, and a desire for public gatherings, community events and parades such as Imperial’s have returned full force.

“It’s a huge festivity. You know, what it is like, all those (people) getting back together, without COVID. We still have COVID, but just the fact that we can be outside and see our friends and family, I think just everybody’s very happy,” said the parade’s grand marshal, Valentina Estes.

Estes is the owner of a Benchmark Mortgage, a business on Barioni Boulevard in Imperial, just off the parade route. Estes was chosen to be grand marshal because of her philanthropy, which she continued by using her position to collect donations of toys for Cody’s Closet, a nonprofit that helps Imperial Valley residents in need of assistance. Estes was to continue to collect toys during Imperial’s Christmas in a Small Town on Saturday, Dec. 11.

Maria Sanchez of Brawley brought her three young children out to see the parade, saying she was appreciative of the opportunity to get out and about after the pandemic shuttered so much last year.

“I never cared about parades and stuff before. Every time my kids asked to go to anything like this, I would make up an excuse and tell them (that) we would go next year,” Sanchez said. “Well, when everything got cancelled last year, and I don’t know, I guess I appreciated it more? So, this year we are going to as many things as we can.”

Sanchez was not the only non-Imperial resident to attend this year’s parade. The parade route, which ran Imperial Avenue from Imperial’s City Hall at Second Street to around 12th Street, was jam-packed full of people from around the Imperial Valley, and featured vendors selling everything from kettle corn to Christmas gifts.

“I think bringing it back is really bringing together that true sense of community and allowing for everyone to come together especially during the holiday season and celebrate what all that means to the to the city of Imperial and really the Imperial Valley,” Assistant City Manager Brown said. “This has really turned into a regional event that everyone can enjoy and come together. And everyone just got to celebrate the spirit of Christmas and togetherness tonight and that’s what it’s all about.”

As the parade moved across town, the participants competed to win on of six awards, with the winners being announced late in the evening on the Dec. 10.

Coming in first for school spirit was Frank Wright Middle School Band. In the drill team category, it was Meadows Union’s ASES progrm. Sunshine Folkloric and Flamenco Ballet took first for dance groups, while Axis Metal took the car club category, and Gibson & Schaefer took the final category, “other,” for any group whose entry didn’t quite fit the other categories.

“It was so pretty. There were pretty lights everywhere, and they were dancing and playing music, and then Santa came on a fire truck!” 7-year-old Calexico resident Samantha Flores said excitedly after the parade ended, her smile shining as bright as the lights on the floats.