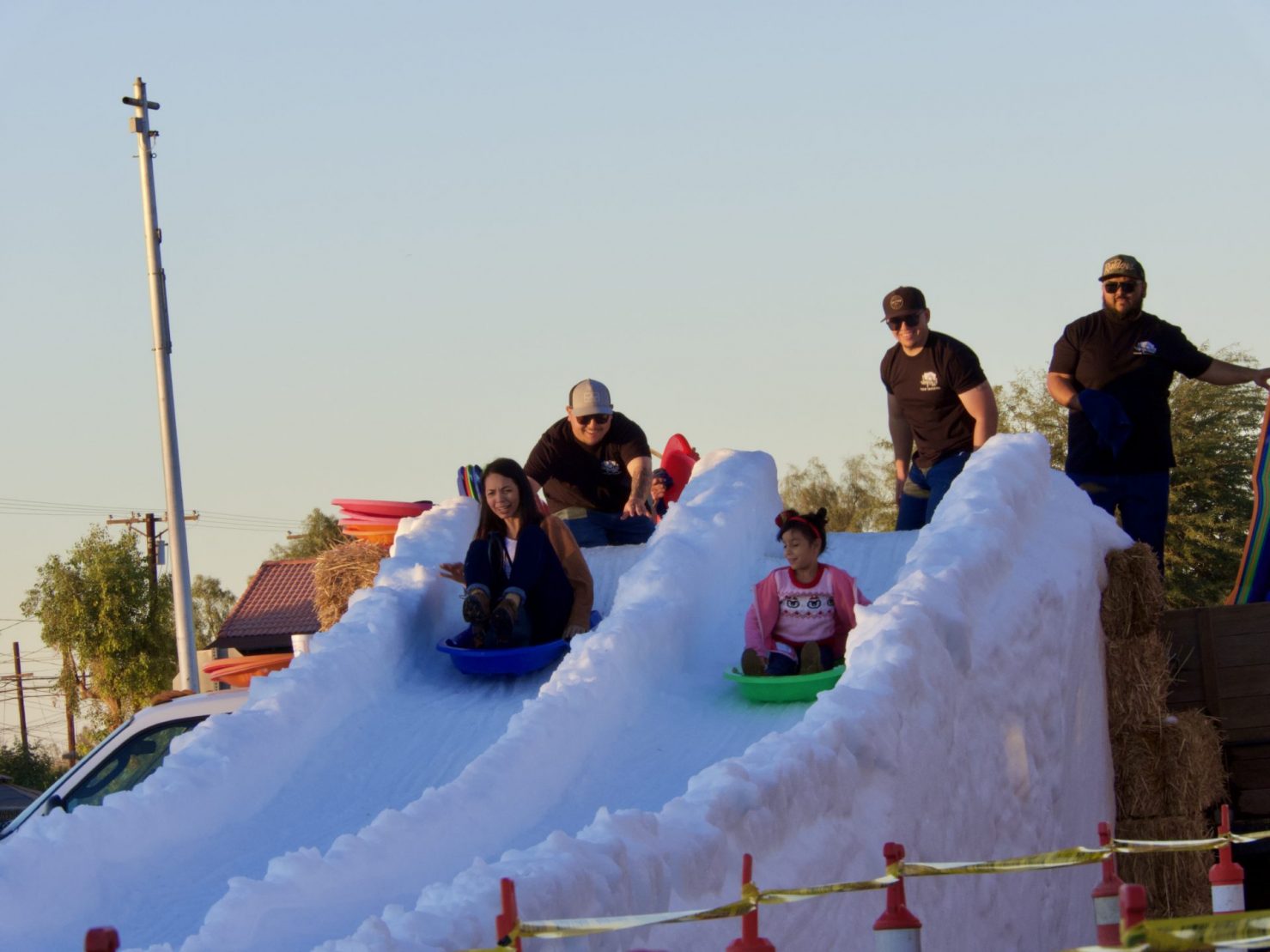 Parents and children both enjoying sliding down the snow hill during Imperial's Christmas in a Small Town on Saturday, Dec. 11. | MARCIE LANDEROS PHOTO
Home
Regional News
In Regional News

IMPERIAL — Christmas in a Small Town made a big return on Saturday afternoon, Dec. 11, in downtown Imperial, following up the success of the previous night’s Parade of Lights.

The Christmas-themed farmers markets with plenty of goods and entertainment was a collaboration of the city of Imperial and the Imperial Valley Regional Chamber of Commerce.

While there was much to see and do, the snow hill was an overwhelming success, with lines stretching as long as half a city block. People young and old enjoyed taking a turn sledding down the hill, with even city officials getting into the spirit, holding their own sled race down the hill.

“That snow hill is so much fun. I think I had as much fun as my kids did on it. Me and my wife agreed that we are going to look up places nearby to go sledding,” El Centro resident Eddie Garcia said as he left the snow hill.

City officials weren’t immune to the joy the hill was bringing downtown, as one council members sparked up a little friendly competition on the mountain of ice.

“Come on, the city manager and I are going to race down the snow hill,” said Imperial City Council member Robert Amparano, calling out to media members and city employees to follow.

A handful of staff and media gathered for Amparano’s race against Imperial City Manager Dennis Morita. City staff laughed and cheered as the two men came racing down the hill with smiles on their face, with Amparano coming in first. As Amparano stood from his sled, he could be heard laughing as he shouted to the city manager, “Dennis, do you want to go again?”

The Regional chamber offered joy of a different sort to adults a block from the snow hill, featuring a beer garden that included holiday-themed specialty drinks, including “Mistletoe Mule” and “Mrs. Claus Coco” alongside the beer selection.

“I really liked the Mrs. Claus Coco. It was, like, really good, and all chocolatey,” said Lupe Rodriguez of Brawley, as she stood just outside the beer garden.

Regional chamber board Vice President Bari Smith Bean attended the event, helping set up the beer garden and run a raffle which saw three Christmas trees loaded with items given out to the lucky winners.

“We’re so excited to be here. This has historically been an Imperial chamber event, and since we became the Imperial Valley Regional Chamber, we’ve taken on all the signature events of the previous chambers, and so we’re so excited to participate in this and to be partnering with the city to put on this event,” Smith Bean said.

Vendors lined the city streets, with people selling good, handing out information, and playing games. Among them, Imperial County Undersheriff Fred Miramontes could be seen campaigning to be the next sheriff by handing out silver bells to crowds of smiling faces.

“You could see it in the face of the attendees. It’s awesome. It’s, you know, it’s a nice weather, and everybody’s having fun. And I’ve had good results at my booth, so I’m sure everybody’s in the same mood,” Miramontes said.

At the farthest end of the market, one little girl, 7-year-old Jordyn Brooks of Seeley, found her joy inside a booth that sold one thing, and one thing only, hula hoops.

“I love the hula hoops, they’re so pretty and sparkly,” said Jordyn, as she picked out a purple and silver hula hoop.

There were a wide variety of games scattered among the other vendors, aimed for all ages. There were carnival games aimed for children, cornhole hosted by Humble Farmer Brewing Co., and trivia hosted by Imperial’s own Mr. Trivia.

“I love it. We’re not selling anything. We’re not for profit. We’re just here to have fun and show our appreciation of the city of Imperial and where we grew up,” said Mr. Trivia owner, Clyde Carson, before inviting the community to join him for trivia on Thursday, Dec. 16, at Sweet Nothings, a new El Centro bakery that features low and no sugar desserts. We just had a lot of fun putting this together.”