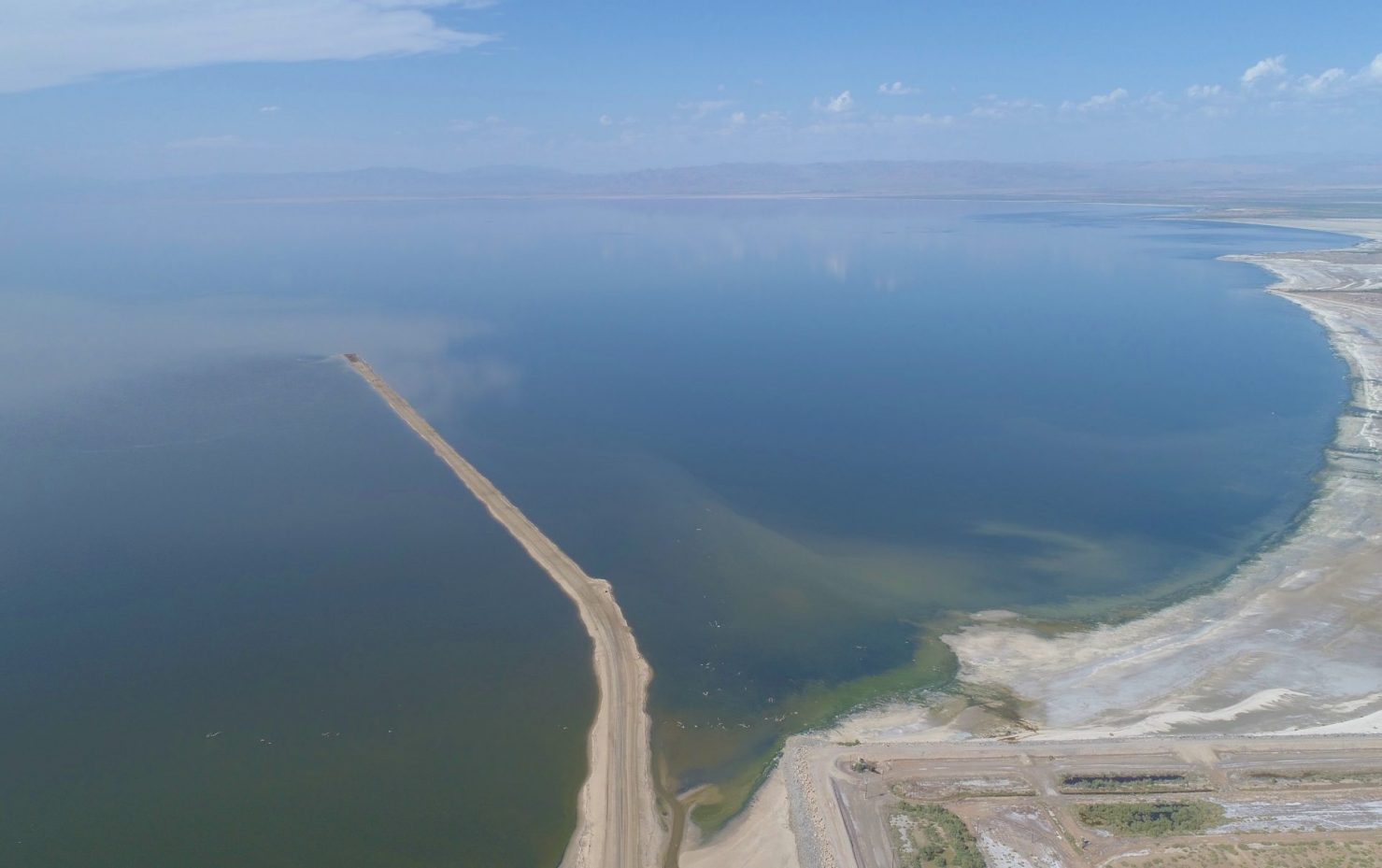 A causeway juts forth into the Salton Sea on the first of the Salton Sea Management Program’s mitigation projects, a $206.5 million initiative that will convert about 4,100 acres of exposed seashore into ponds of different depths that will provide habitat for fish and birds on both sides of where the New River flows into the Salton Sea. The project is on the southwestern end of the sea. | CALIFORNIA NATURAL RESOURCES AGENCY PHOTO
Home
Regional News
In Regional News

SALTON SEA — An ongoing species conservation habitat project at the Salton Sea’s southwestern shore is serving as a reminder that the sea’s restoration remains a key priority for Gov. Gavin Newsom.

So, too, is a tour that dozens of state, federal and local stakeholders took of the project site where the New River enters the Salton Sea several miles west of Westmorland on Friday, Dec. 10.

Among those present was California Natural Resources Agency Secretary Wade Crowfoot, who said the tour was an acknowledgement of the ambitious Salton Sea Management Program’s progress and the overall work that remains to be done.

“For a very long time there’s been a lot of talk about getting projects in the sea to try to stabilize the situation down here, and this is the first sign of visible progress,” he said. “If we do what we’re supposed to be doing, you’ll see other projects breaking ground here over the next few years.”

As the first and biggest of the Salton Sea Management Program’s mitigation projects, the $206.5 million initiative will convert about 4,100 acres of exposed seashore into ponds of different depths that will provide habitat for fish and birds on both sides of where the New River flows into the Salton Sea.

The species conservation habitat project is projected to be completed in late 2023. It will create berms to enclose three large ponds containing pupfish, and eventually tilapia, as well as islands for birds’ nesting and resting.

Overall, phase 1 of the 10-year Salton Sea Management Program (SSMP) calls for the conversion of some 30,000 acres of exposed playa into equal parts dust suppression and habitat restoration projects.

Construction personnel and equipment began mobilizing at a staging area established on Poe Road in January 2021. A visitor center is to be constructed at the same site.

Plans also call for a pumping station to be installed at the end of a mile-long causeway that juts into the sea and which will transport the sea’s saline water to the ponds to create habitat consisting of a mixture of fresh and saline water, Sayegh said.

A 25-foot-deep, 3.5-mile-long channel will extend from the causeway’s end and allow the planned pumping station to draw sea water into the project’s three ponds.

A 7.2-mile interceptor ditch spanning the majority of the project’s southern perimeter was also built to capture the agricultural runoff from the surrounding area and divert it away from the planned habitat ponds and into the New River.

The project area has been identified as being among the receding sea’s most emissive shoreline because of its relatively high levels of sedimentation from the New River and nearby agricultural runoff drains, said Vivien Maisonneuve, California Department of Water Resources project manager.

The same sort of conditions can be found at Red Hill Bay, where repeated Alamo River floods have deposited a thick layer of sedimentation, he said.

Maisonneuve said that within a year and a half, the shallow waters that surround the species conservation habitat project’s mile-long causeway are expected to recede, leaving that swath of the sea’s southern shore exposed.

To create the causeway and berms surrounding the ponds, the project has relied on earthen materials found solely onsite.

The project has encountered its share of challenges, most notably the lengthy process it took to acquire the site’s land from either the Imperial Irrigation District, U.S. Bureau of Reclamation or the Bureau of Land Management, Maisonneuve said.

Protected species that are found within the project area have presented additional challenges, as well. Those species include the desert pupfish, Yuma Ridgeway’s rail, burrowing owl and snowy plovers, to name some.

As the sea has receded, contractors working on the project have encountered additional wildlife habitat near the ag runoff drains that had allowed vegetation to flourish along their banks.

“Typically, any complicated project will have one or two and here we have five (endangered species),” Maisonneuve said. “Which is also why it’s so important to save it because it’s really such an amazing and diverse avian population.”

The ponds will be established upon exposed lakebed where furrows were created as part of three temporary dust suppression projects on a total of 775 acres, according to the Salton Sea Management Program’s website.

Similar furrows were completed in October for the Red Hill Bay project undertaken jointly by the Imperial Irrigation District and the California Department of Fish and Wildlife.

Additional work at Red Hill Bay will include the installation of irrigation infrastructure and planting vegetation in the spaces between the furrows.

The IID is moving forward with the so-called “best available control measure” project amid a legal battle with the Imperial County Air Pollution Control District over Red Hill Bay.

The ICAPCD has alleged that the district failed to control air-quality emissions at the project site on a few instances during the summer of 2020.

As part of the Dec. 10 tour of the species conservation habitat project site, dozens of stakeholders took part in a roundtable discussion.

The roundtable discussion served to elicit feedback from community stakeholders, said Secretary Crowfoot. The tour and roundtable discussion were attended by representatives of both public and private entities, as well as members of the agricultural industry and tribal members. Media was not allowed to attend.

“For too long this kind of work that the state government did was completely disconnected from those communities,” Crowfoot said. “The work that we’re doing here is about improving the region, so they have to be guiding the work.”

(This story was updated at 4:35 p.m. Wednesday, Dec. 15, with the corrected name of MWH Constructors Inc.)

Next
Ponche Ingredients are Prohibited from Entry, CBP Says