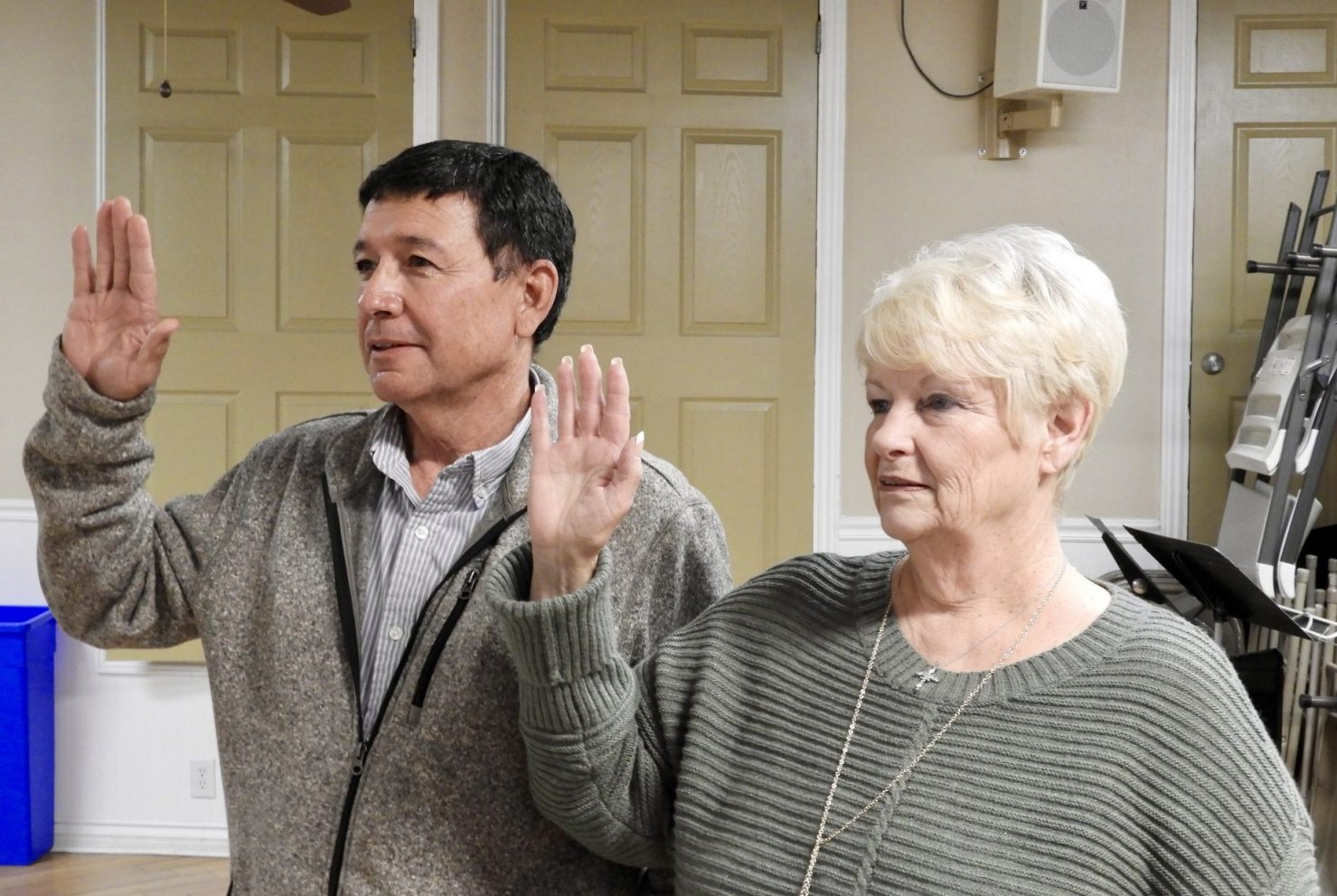 Both Are Focused on Getting Gene Layton Pool Open Before Summer

Pacheco and Ward were elected mayor and mayor pro tempore, respectively, during the ceremonial reorganization of the Holtville City Council on Monday night, Dec. 13.

“Actually, it’s an honor (to become mayor). … I got on the City Council to try to help the community as much as I could. And I think being mayor, we’re gonna try to follow the same agenda that previous mayor, Mike Goodsell, did,” Pacheco said in an interview later that evening. “I thought he did a great job of running it, so I’m gonna try to continue and not drop the baton.”

A Holtville native Pacheco graduated from Holtville High School in 1977, later attending Imperial Valley College. He lives in Holtville with his wife and daughter and has been employed by the Imperial Irrigation District since 1980, where he started as zanjero, delivering water throughout Imperial County and is currently serving as the water department manager.

Ward echoed Pacheco’s sentiments, expressing her dedication to those living in Holtville.

“Oh, it’s an honor to be able to … serve with the city. I just served with the City Council. I’ve been mayor two other times, and as the mayor pro tem two other times, to serve our community,” Ward said in an interview after the meeting. “That’s the main thing about community … (making) that we have a nice safe and profitable, you know, setting.”

Ward hails from Wichita, Kansas, and went on to attend the National University School of Law in San Diego. Ward is retired now but worked in the legal field beginning in the early 1980s, finally leaving the Imperial County Superior Court in 2010. Ward has served as a Holtville City Council member since 2012.

Both Pacheco and Ward put a focus on rehabilitating the Holtville’s aging Gene Layton Memorial Pool, which serves as the only public pool facility within the city thus not only serving community members, but also as the facility that Holtville High School’s swim team uses.

“Right now, we’re focused on the city pool and getting it up and running by the summer, so that the kids can get back to their swim teams and be able to compete and stuff. And that’s our main thing right now,” Ward said.

The city of Holtville has been in discussions on how to best rehabilitate the city’s pool, already having applied for a non-competitive grant through the Proposition 65 Parks bond to fund the project, with further unspecified support coming from IID. Holtville City Manager Nick Wells updated the council during the meeting that the city will receive notice of acceptance or rejection at the beginning of the new year.

“The city pool is the most important thing for our little community. And I think I’m going to really get that to the finish line. That’s going to be one of my biggest goals,” Pacheco firmly said.

While Pacheco and Ward further shared that public safety is a high priority for both, their ideas of how to achieve these goals began to differ, with Ward focusing on the proposed new public safety building.

“We’ve also got work down the road for a public safety building, so we’re still working on that. That’s been a goal of ours. Trying to make it happen. So those are the two main things that I can think of keeping in keeping everybody in the know about what’s going on, and that way they can, they can feel safe, and they know that you know everything’s under control,” Ward said.

For Pacheco on the other hand, it was the abandoned houses and the area where the Pear Canal runs along Towland at the eastern edge of the city that draws his concern.

“Some of these vacant lots that are around town that just needs some attention. Some houses that have been boarded up for a long time, we need to do something with those. We have a project to pipeline in certain canal that goes through the city that we want to finish and enclosed to make it a little safer for our community,” said Pacheco, but was unable to give further details due to the early stages of the project.

The City Council were scheduled to also choose a Chair and a Vice Chair to the Successor Agency to the Holtville Redevelopment Agency, alongside discussing the adoption of a Permanent Local Housing Allocation Plan (PLHAP) but choose to wait until next month’s council meeting to make the final decisions. The City Council also voted to approve the easements for the upcoming Sunset Rose Senior Apartment Complex.