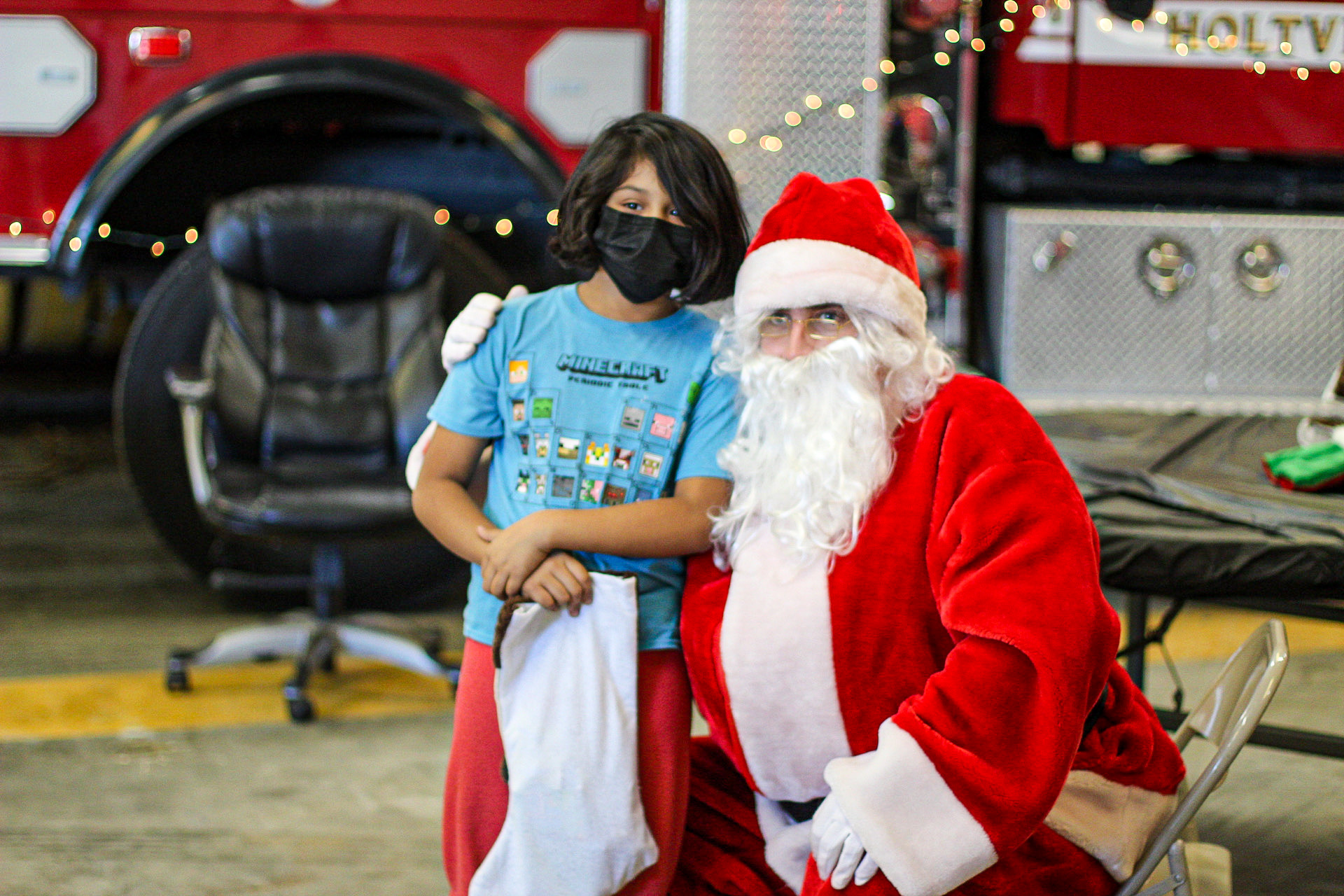 HOLTVILLE — For the past two years running, Finley Elementary student Bethany Lopez has been celebrating Christmas a little early with some of her classmates and the Holtville Fire Department.

Her first year as a guest of the annual Jonny B the EMT Guardian Angel program came as a surprise, when her mother took her to the fire station and she unexpectedly encountered classmates, Santa Claus and gifts.

This time, the 10-year-old fourth-grader said she kind of knew what to expect, and was even more grateful for the opportunity to gather in person and to again walk away with a $100 Walmart gift card, which will come in handy.

“I could use a pair of jeans,” Bethany said on Friday, Dec. 17. “Maybe buy some presents for my family.”

This year Bethany was one of about 30 Finley Elementary School students who took part in the annual Guardian Angel program at the fire station.

The program provides less fortunate kids with a pizza lunch, a Christmas stocking full of gifts, an opportunity to meet Santa, and a $100 gift card, all made possible by the Holtville Fire Department and generous sponsors and donors.

Siblings Akemy and Amy Marinero thought they were just going for a quick drive with their father, Francisco Marinero, but instead ended up at the fire station and the festive gathering.

The surprise visit marked the third- and fourth-grader’s introduction to the Guardian Angel program and came on their school’s last day of instruction before the winter break.

“They got emotional when they got here,” their father said in Spanish. “They saw everything and thanked me.”

Holtville resident Sonia Vaal said her daughter, Aida Lopez, has been a guest of the program for the past few years and has enjoyed gathering with her classmates, eating George’s Pizza and the chance to win prizes.

“And the presents, of course,” Vaal said. “It’s a good thing for the kids here in Holtville who always need something like this every year where they can gather and have fun.”

The Guardian Angel program has been in existence for some 13 years, Holtville Fire Chief Alex Silva said.

He recently renamed the program in honor of the late Jonathan Burnworth, a former Holtville Fire Department captain who died in 2018 in an accident while employed as an Imperial Irrigation District dive team member.

“We know he’s watching us,” Silva said on Friday.

The first year he hosted the event, only four kids took part in it. Since then, the number of participants has varied, depending on the amount of funds raised.

About 50 kids took part in the program last year in a drive-through event because of COVID-19 restrictions against large social gatherings. The ability to gather in person appeared to have lifted the attendees’ spirits, including Chief Silva.

“I think I had a bigger smile than the kids did,” he said.

The Guardian Angel program is a great example of the community giving back to those less fortunate, Finley Elementary School counselor Tiffany Terrill said.

“It’s an amazing thing that the Fire Department does for our kids,” she said. “They’re so generous and so thoughtful.”

Aside from the holiday cheer that the event generated, Finley Elementary Principal Marco Page said that students and staff have been responding positively to being back on campus for in-person instruction this school year, as well.

“It’s just awesome and great to have the students back at the school,” he said.

Earlier in the day, Silva, several fire personnel and Holtville Mayor Mike Pacheco attended a small ceremony at Finely, where the Fire Department donated more than 50 pairs of new shoes.

The shoes weren’t there to distribute to individual students per se. If over the course of the school year, school officials see a child needs new shoes, they will make sure that happens.

At the Guardian Angel event, after the students were finished scarfing down George’s Pizza, City Manager Nick Wells addressed them briefly.

A former Finley student himself, Wells told the young students that the Guardian Angel program reflected the community’s concern for one another, a collective sentiment that not many other locales exhibit to the extent that Holtville does.

“We are very proud that we have had this event all these years because it really shows that Holtville is a caring and loving community,” Wells said.

Next
Did California Get its Money’s Worth from $1.7 Billion COVID Test Contract?