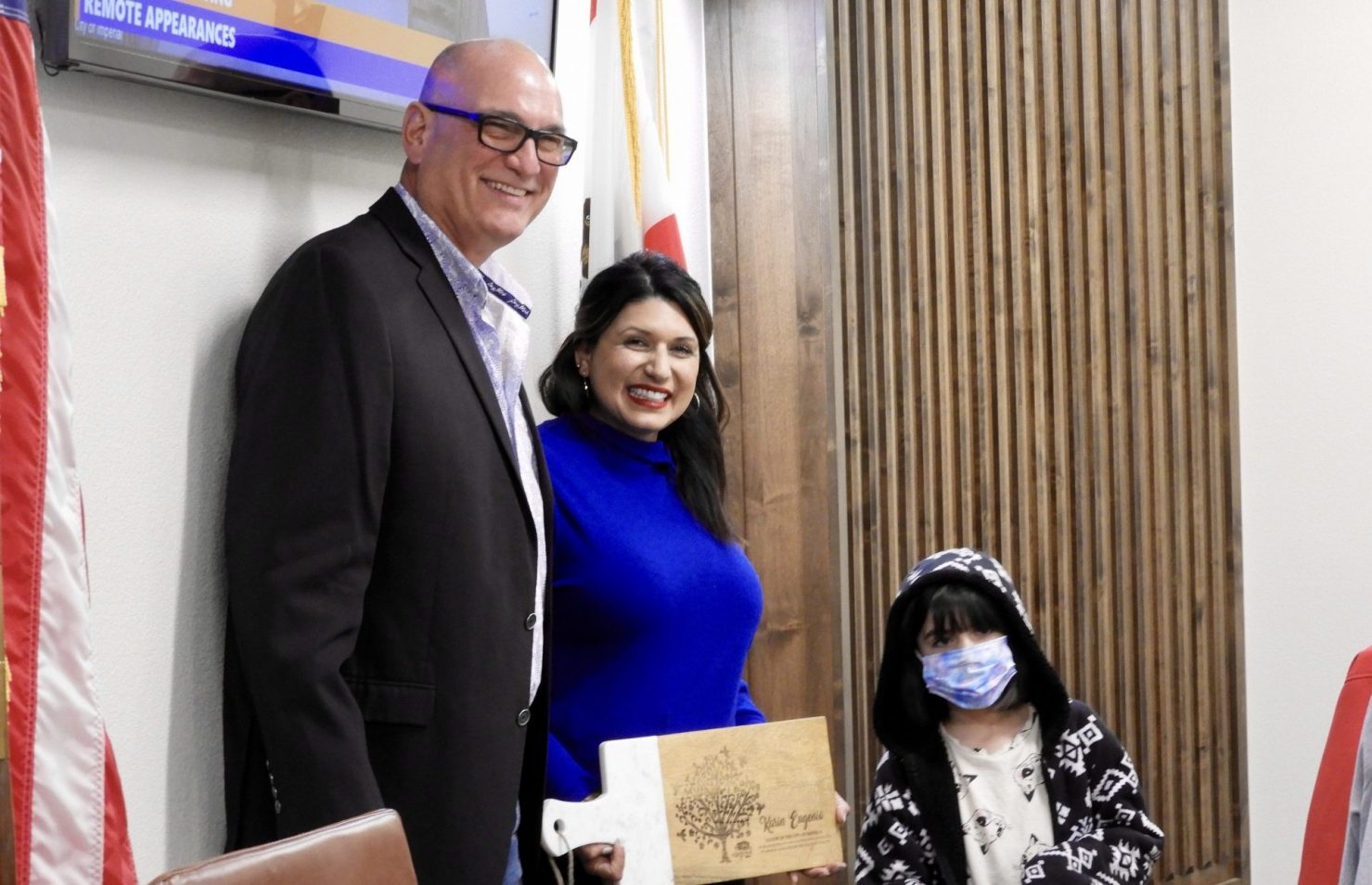 Outgoing mayor for the city of the Imperial, Karin Eugenio (center), poses next to incoming mayor, Geoff Dale (left), and Eugenio's 7-year-old daughter and self-proclaimed "vice-mayor," Spencer Eugenio, holding a personalized charcuterie board given to her to honor her time as mayor during the Imperial City Council meeting on Wednesday, Dec. 15. | MARCIE LANDEROS PHOTO
Home
Regional News
In Regional News

IMPERIAL — During the final moments of the last Imperial City Council meeting of 2021, Karin Eugenio bid a bittersweet farewell to her time as mayor, handing over the gavel to her fellow council member, Geoff Dale, during the annual reorganization ceremony.

“I look forward to finishing this last year as a City Council member, and regardless of my presence here, the council, I know the city is in good hands from (City Manager) Mr. (Dennis) Morita, to (Assistant City Manager) Miss (Alexis) Brown, to our newest mayor, Mr. Geoff Dale, and to our newest mayor pro tem. Katie Burnworth. Mr. Dale has been an amazing mentor and with great pleasure I gladly hand over this gavel. Here you go, it’s all yours. God bless,” Eugenio said as she handed Dale the gavel on Wednesday, Dec. 15.

Eugenio thanked her daughter, self-proclaimed “Vice Mayor” Spencer Eugenio, and her sister, Martha Benavides, for their support through her mayorship. Eugenio also spoke of some of the tragedy her and her family have faced during this time, sharing that she lost her brother, Eddie, earlier this year, and then nearly lost her mother to COVID just before the holidays.

While Eugenio is unsure if she would want to return to her position as mayor, she expressed pride in her accomplishments, having seen the city through the opening of the new bike path on Aten Road, the new post office, and a new wastewater treatment plant, as well as improved multiple parks throughout the city and beginning the plans for developing the Highway 86 corridor and Imperial’s long abandoned “Ghost Hotel.” As Eugenio enters the new year as a City Council member, she promised to keep advocating for the city of Imperial’s Sunset Park in the northeast park of the city.

“Being elected is no easy task to say the least. Everything we do is public, and it is something we sign up for. But we are just people like the rest of you. We have families, we have struggles and sometimes being in this position brings about a whole new set of struggles. So, would I do this again? I don’t know, but I am proud of what I was able to achieve through this collaborative process,” she said.

After the meeting adjourned, the city held a reception at Humble Farmer Brewery in Imperial to celebrate Dale and Burnworth’s appointments. During the reception, Dale told stories about growing up in Imperial, pointing to places he used to play as a child, and reminiscing with a smile over how things have changed over the years.

“I love this city. I really do,” Dale said at the end of the evening as he walked to his car.

Dale has served the city of Imperial as a council member for the last 21 years, taking office in 2001. Dale is also a pilot with a passion for flying and had a long career as an Essential Air Service representative for former Imperial County air service provider, Seaport Airline. His wife, Linsey Dale, is also involved with local government by currently serving as the Imperial County registrar of voters.

As mayor, Geoff Dale plans to focus on developing the Highway 86 corridor, a project which he has been pushing for many years, along with a focus on business and development within the city, he said on Thursday, Dec. 16.

City officials have said they hope to develop the corridor into a destination highway, where people can enjoy a scenic drive, versus the alkaline-covered dirt patches that are in place now. While Dale could make no promises, he shared that he hoped that the city will break ground on the highway project before the end of his term as mayor.

“Big things are in store for the city of Imperial,” Dale said confidently, his tone promising a bright future.

During the City Council meeting on Dec. 15, the city voted unanimously to accept the work on the shade structure over the splash pad at Eager Park as completed, despite plywood still being seen at the pad.

“I have a question. She looks really good. I like it. Nice and big. Everybody should have shade. I do have one comment. … We have plywood with some cones laying on the ground what is that?” council member Robert Amparano asked.

“We just haven’t removed it. We dug a test hole for the water table to see how fast the water would return as a tester for our footings for the shade,” Imperial Parks Director Tony Lopez said in response.

The shade structure was completed on Nov. 15, and was provided by Shade USA, an Arizona-based company that specializes in shades. The shade structure was initially budgeted at $121,485.24 but came with a $6,837.60 change order due conditions of the water table that were discovered after construction began. The project’s total came to $128,322.84 and was funded through California’s Proposition 86 Per Capita Program, which provides funds for local park rehabilitation, creation, and improvement grants to local governments on a per capita basis. Funds also came from the city’s March and Ash Recreational Funds, from cannabis sales.

The council unanimously approved adjustments two city ordinances, the first making it easier to restore damaged “structures of non-conforming uses” and the other simplifying the standards for attached and detached canopies in residential zones, so homeowners in the city can more easily improve their homes.

According to the original city ordinances, any structures of non-conforming use or buildings that were built before zoning was established or changed that are out of compliance with current zoning laws, were unable to be rebuilt or repaired should the structure suffer from major damage, often making them difficult to insure and sell, City Manager Morita and Community Development Director Othon Mora explained.

This posed the biggest threat to the historic houses in the downtown area of Imperial, which are now no longer in a residential zone but commercial.

The new ordinance puts the responsibility of stopping the rehabilitation of a building the was grandfathered into the zone on the city, providing a legal avenue to do so but no longer automatically preventing the work from being done.

The city quickly followed up with another a change to another home improvement ordinance, which defines the standards for attached and detached canopies in residential zones, reducing the required setback from the property line, or the amount space required from the edge a property to a structure, for a canopy to 3 feet from the original 5 feet in response to the amount of variances applied for by residents of the city’s smaller lots.

“Actually, I like this one. It saves our residents some money, because I have seen a lot of variances come through for the setback. Yes, especially during my time on Planning Commission. It’s so in time consuming,” council member Burnworth said. “I believe it’s like $1,500 just to apply for a variance, you know, and then our time, and all of that. So, it adds up really quick.”