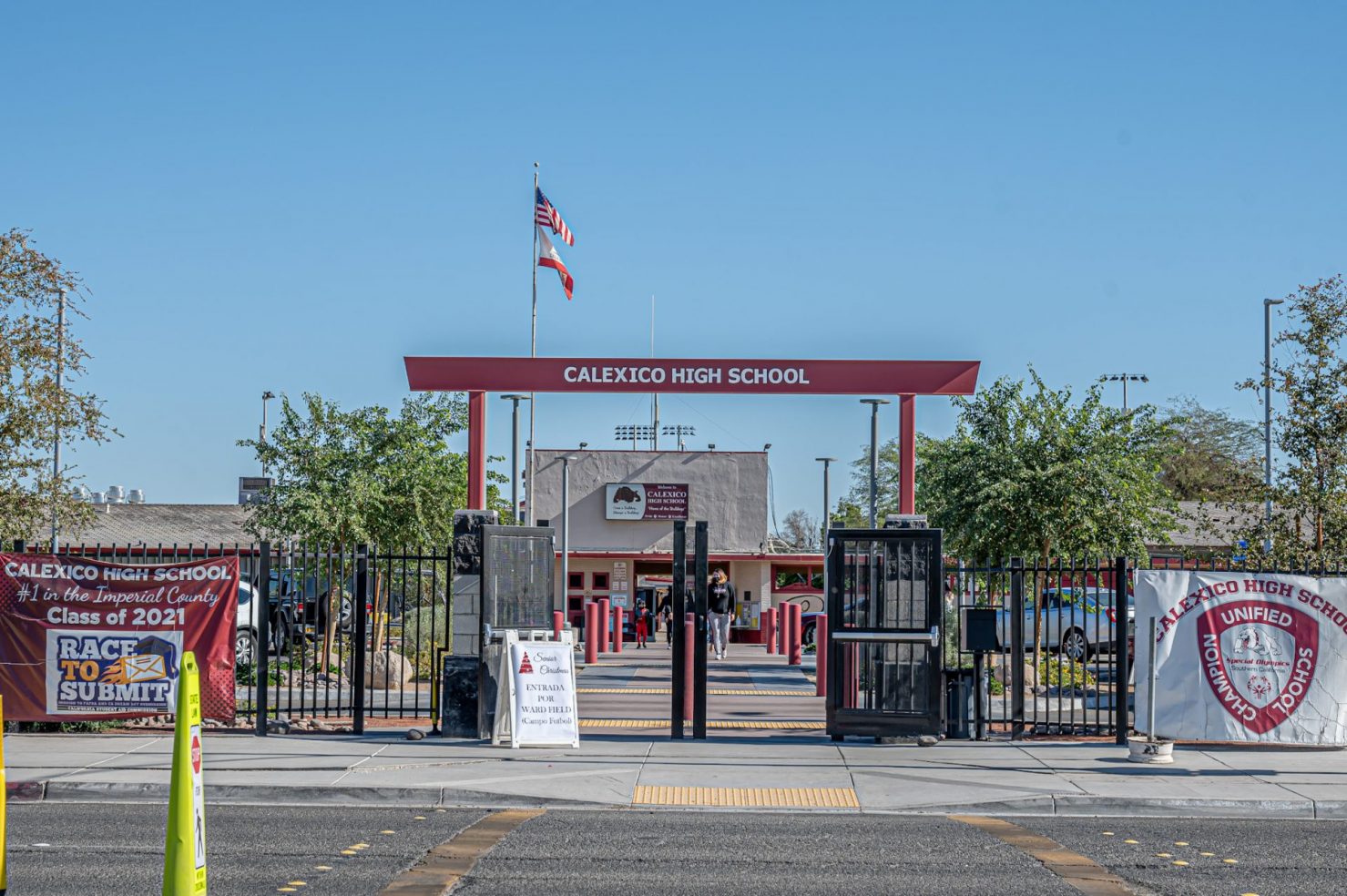 The front of Calexico High School is shown on Friday, Dec. 17, shortly after a lockdown was lifted over a credible school shooting threat that was tied to TikTok. Friday was known in some circles as "National School Shooting Day," and warning were sent out across the country. | CAMILO GARCIA JR. PHOTO
Home
Education
In EducationPublic SafetyRegional News

CALEXICO — Charges could be pending against a Calexico High School student whose false school shooting threat put the campus on lockdown for a little more than an hour on Friday morning, Dec. 17.

A similar threat was made against Barbara Worth Junior High School in Brawley, but that resulted in an enhanced police presence and only quasi-lockdown measures, according to district officials there.

Both threats came as school districts all over the country — including multiple Imperial County districts — sent letters home or electronic messages to parents on Thursday, Dec. 16, and before school Friday either warning of the threats or stating there were unsubstantiated noncredible rumors tied to a national TikTok trend claiming there would be school shootings all over the country on Friday.

In some TikTok posts, Friday was referred to as “National School Shoot Up Day.”

It was that social media movement that apparently compelled the Calexico High student to tell some classmates and send out messages of a shooting on campus that turned out to be a prank.

The Calexico threat rose to the level of police response after a teacher was made aware of a cell phone screen shot of a text from a student stating there were other students in one of the campus buildings with weapons, Gerardo said.

That teacher alerted the school, which contacted police while placing the school on lockdown and going through its notification procedures, the chief said.

“I think the school did everything really good, did all the notifications, and then called us. I sent my guys out there and we started looking into it at that point. There was a parent that actually had possible information on the name of the kid (who made the threat),” Gerardo said.

Police went on campus and located students who know the student who made the threat. When police found the student, he initially denied making the threat, Gerardo said.

After police told the student the incident was serious and the school was on lockdown, the student confessed.

“He says, ‘look, I got a text from this number, it says Vans and it had a gun in a backpack. And I thought it would be cool for me to show it to people and say there’s gonna be a school shooting today’” Gerardo explained.

“He goes but there’s nothing here (no weapons). We don’t have anything,” the chief said. “It’s just off that TikTok thing that went out yesterday.”

Calexico Unified School District officials weren’t immediately available for a full statement, but when contacted via text, the public information officer assured that all students were safe.

Gerardo said while the student was not taken into custody, the Police Department will make a report and submit it the District Attorney’s Office for consideration of charges.

In the north end, Brawley Elementary School District Superintendent Dr. Richard Rundhaug said Barbara Worth Junior High School was placed in a form of minor lockdown over threats that emanated from two students that Brawley police found to be noncredible.

All doors were locked at the junior high school on Friday morning, and teachers were told to “be aware” during passing periods, Rundhaug said, while students were moving from one class to another. There was also a heightened police presence on campus, he said.

Tied to the TikTok threats, the local student had sent a text, Felix said, adding he was located and counseled by police. He added the students face no criminal charges but the local student will face some sort of discipline with the school district.

By Friday afternoon, it didn’t appear any other schools had experienced threats that required the types of measures undertaken at Brawley or Calexico, although an enhanced police presence may have been occurring Valley-wide.

Matt Phillips, principal at Southwest High School in El Centro, said the Central Union High School District sent letters out to parents on Thursday and Southwest had posted something on the school’s website by 9 a.m. Friday, plus had requested El Centro police do additional patrols of the school.

The TikTok threats had made their way around the nation on Friday, with CNN Business reporting school districts from Minnesota to Texas sending out announcements that they were shutting down schools on Dec. 17 in response to an innumerable amount of videos, some mentioning specific schools, suggesting that students avoid coming to class on Dec. 17 and others advising students to be safe.

The US Department of Homeland Security said Friday morning it has no evidence to suggest the claims are credible but encouraged the public to “remain alert.”

On Friday afternoon, TikTok said it had begun removing the warnings from its platform as misinformation, according to CNN Business.

“We’ve exhaustively searched for content that promotes violence at schools today but have still found nothing. What we find are videos discussing this rumor and warning others to stay safe,” the company said in a tweet. “Local authorities, the FBI, and DHS have confirmed there’s no credible threat, so we’re working to remove alarmist warnings that violate our misinformation policy. If we did find promotion of violence on our platform, we’d remove and report it to law enforcement.”

TikTok first indicated it was aware of the warnings on Thursday afternoon, saying then that it treats “even rumored threats with utmost seriousness.”

Getting out in front of social media tends to be a problem for law enforcement and school districts, considering the speed at which brands like TikTok and SnapChat can move and spread. Even though TikTok had said it’s working to deal with the issue, it’s not fast enough for Police Chief Gerardo.

“I hate social media for this type of stuff, No. 1. No. 2, TikTok, they have all these filters where they can censor everybody’s comments, why not use them? To me, if somebody puts down National School Shoot Up tomorrow, I don’t see like TikTok doesn’t stop that stuff from spreading. It’s all over the nation.”