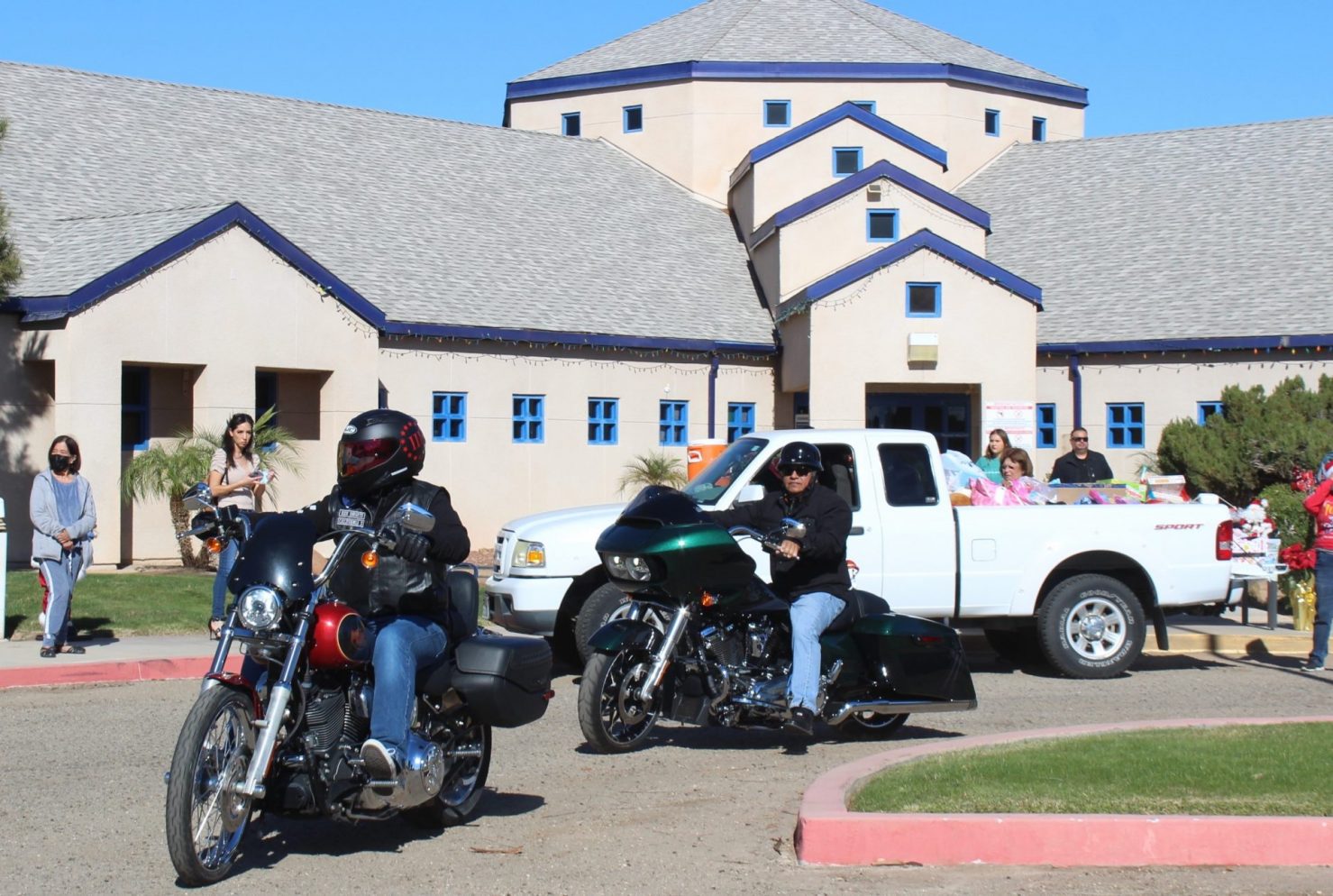 Bikers roared into the parking lot of the Betty Jo McNeece Receiving Home south of El Centro on Saturday morning, Dec. 18 with two truckloads of toys for the children there. It was part of ABATE 38’s annual Los Niños Toy Run. | KATHERINE RAMOS PHOTO
Home
Regional News
In Regional News

Close to 50 bikers roared up to the Betty Jo McNeece Receiving Home south of El Centro on Saturday morning, Dec. 18 to deliver hundreds of toys to the youths of Imperial County.

The Los Niños Toy Run has been going since 1981, when the Valley Independent Bikers made deliveries to the receiving home that was once known as Los Niños. The receiving home is for children temporarily taken from their parents’ or guardians’ care.

The toy run was later picked up by the ABATE 38 chapter in 1992, said club President Ed Aranda and the goal is still the same: to bring toys to children who would not have anything on Christmas.

“It’s one of those things that we keep doing, because even in the rain people keep showing,” Aranda said of a past year when it poured on the Los Niños run.

Under clear skies, Saturday’s event began at Coyne Powersports in El Centro, where participants were treated to a breakfast at the shop and an auction before taking off. Close to 50 bikers were out at the run from the Imperial Valley and outside the Valley as well.

Each biker brought in at least one toy for the run and toy donations came in from other people who happened to pull up just to give, filling up the truck that would take all the toys to the receiving home. The Yuma HOG (Harley Owners Group) chapter even rolled in with a van full of toys in tow.

Yuma HOG just finished its own toy run last weekend, according to HOG’s Saul Lerma, which was supported by members of the ABATE chapter.

“We try to do what we can to support Los Niños Toy Run,” Lerma said. “We take time to try and get as many toys as we can and make this an annual event.”

“It’s cool to have toys with bunch of hardcore bikers,” Johnny Lopez said. “You see beards and leather pants and hardcore hip hop music, and they are giving out toys to the kids.”

“It just feels great to give to those unfortunate,” said Edward Green with IV Moto, who has been a part of the run for four years.

“I enjoy this. It’s nice to help out kids that are not privileged or don’t have parents,” said Sandra Arzola of ABATE, who was riding for the second year.

El Centro City Council member Edgard Garcia made an appearance with his sons to both donate toys and to participate in the morning auction.

“Anything that can bring joy to the community, especially the children, especially underprivileged children, to give them the joy of Christmas is a great thing,” Garcia said.

All the toys donated, the monetary donations, and the money from the auction before the run will go to the Betty Jo McNeece Receiving Home. Other donations came from Costco, Las Chabelas, the Courtroom, El Centro Motors, and Green’s Jewelry.

The receiving home helps between 300 to 500 children every year from ages 0 to 17 that have been abandoned, taken away from parents, physically abused, or with mental-health disabilities.

Betty Jo McNeece administrator Pablo Cerda said the toys are not just given out at Christmas but used year-round at the receiving home, sometimes even given to children on the day they arrive to ease the pain of the bad day, which was echoed by Aranda.

Cerda added that the home also gives toys to foster kids in general throughout the year. Money raised at the auction is used to buy gift cards for the teenagers that end up at the home as well.

“We really, really depend on and appreciate this event, and the kids look forward to it every year,” Cerda said.

Usually there would be a big lunch for the bikers at the end of the run at Las Chabelas in Brawley or special time with Santa for the kids at the home, but due to COVID restrictions that was not part of this year’s event.

Yuma HOG’s Lerma said they will all return next year to continue the annual tradition that has helped put a bright light in many children’s lives.

“We’re going to continue supporting because it is all about the children, and that’s why we are here for, that every child gets a toy for Christmas,” Lerma said. “We just want to make sure that every child wakes up with a toy.”