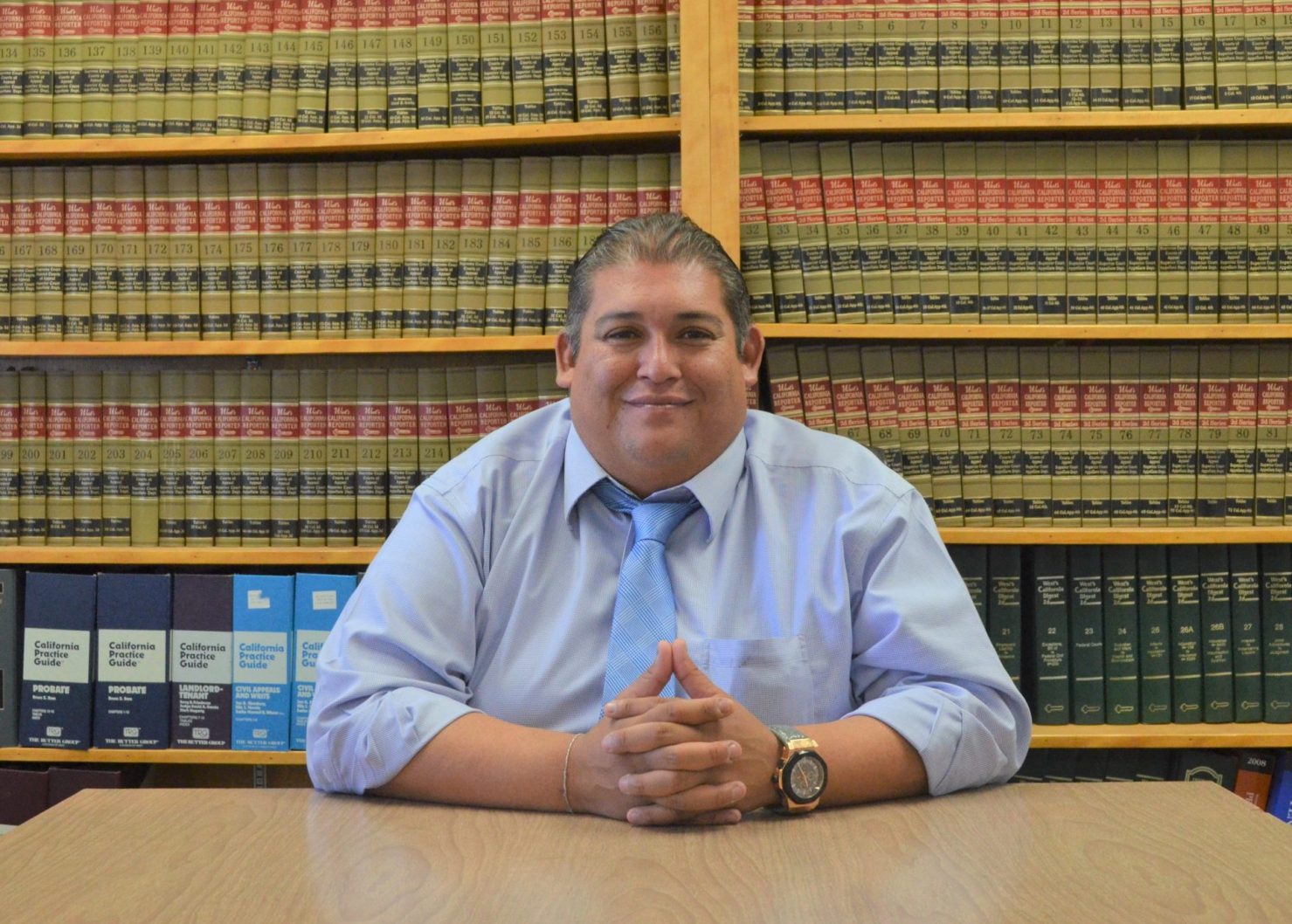 EL CENTRO — When El Centro attorney and City Council member Edgard Garcia ran for the office of Imperial County district attorney in June 2018, he finished with 44.1 percent of the vote, which was not a bad showing considering he faced incumbent DA Gilbert Otero.

Now, nearly four years later, Garcia is running again because, as he aptly put it, he’s no quitter.

“This was a goal, it still remains a goal,” he said during an interview at his law firm’s El Centro office on Friday, Dec. 17.

Yet, unlike his 2018 bid, he will not be facing the agency’s longest-serving DA. Instead, his fellow candidates include George Marquez, a current county deputy public defender who previously worked under Otero at the DA’s Office, and Mario Vela, a current deputy DA who Otero recently endorsed for office.

And while Garcia does not have the day-to-day experience of litigating criminal cases to the extent that Marquez and Vela have — and which is the core responsibility of the DA’s Office — Garcia said he has been practicing law longer than either candidate, and has represented clients in civil, criminal, personal injury, bankruptcy and federal criminal law cases.

What’s more, his tenure with the City Council and as a League of California Cities board director, he said, have afforded him the type of administrative and fiscal responsibilities that both candidates lack and which leading the DA’s Office will demand.

“That’s something that they do not bring to the table,” Garcia said.

Garcia also stands out for being more critical of Otero’s tenure.

When citing the three main areas of concern he would focus on as district attorney should he win the election, Garcia cites actions he’d take that allude to his dissatisfaction with Otero’s stewardship.

For starters, Garcia said he would enhance the DA Office’s relationship with local law enforcement agencies, by primarily providing additional funds and resources to assist with the agencies’ criminal investigations.

“That’s been lacking,” he said. “Right now, for whatever reason there’s a lack of communications between those entities. That needs to stop.”

Garcia also contended that an adequate number of resources and funds are not currently being used to prosecute serious and violent felonies to the fullest extent of the law.

Whether that perceived lack of prioritization is because of a lack of commitment or resources Garcia couldn’t say, but he did offer assurances that convictions for such offenses would be more severe under his tenure.

“Plea bargains for serious and violent felonies are unacceptable, and that’s something that I strive to change,” he said.

If elected, his third priority would be to “revolutionize” the juvenile justice system so that some minors that are convicted of offenses do not face consequences that may promote further criminal behavior. Instead, Garcia proposes to display more compassion to kids who “don’t know any better” and provide them an alternative outlet.

“That’s something that the district attorney can do and be a role model and strive for,” he said.

Like his fellow candidates, Garcia is aware of the challenges the DA’s Office has encountered in recruiting and retaining experienced attorneys. If a shortage of money for greater compensation is the problem, Garcia proposes to find additional sources of revenue for the agency, no differently than he has done for the city of El Centro as a council member.

He also contends that some of the previously departed attorneys left because of a lack of leadership and direction.

“I have already spoken to several attorneys in this county that would be more than willing to come back to the DA’s office and work for me if I’m elected,” Garcia said.

Nor does Garcia agree with recent statewide reforms that have changed some non-violent offenses from felonies to misdemeanors, as well as allowed certain low-level offenders to serve their sentences in county jails instead of state prisons.

As a League of California Cities district director, he has fielded many complaints from the chiefs of police from outside the county, who equate the criminal justice reforms with being “handcuffed” from performing their jobs.

“Those have been some of the worst policies we’ve seen in California,” Garcia said. “Frankly, the only person who can make a difference in those policies is the individual district attorneys of the counties, because ultimately they are the ones that are tasked with charging crimes and they’re the ones that can fire back.”

Garcia’s candidacy also provides him an opportunity to openly share some of his personal background, which in spite of his public profile isn’t all that well known.

He was raised in East Los Angeles by a single mother and was inspired to public service and to pursue a legal career by a father who spent 30 years in law enforcement.

He finished his high school studies when he was 13 years old and enrolled in college courses, focusing on the fields of science and mathematics. Garcia then graduated from the University of California, Santa Barbara with a degree in organic chemistry and, later, from California Western School of Law with a law degree.

He initially went to law school to specialize in patent law and afterward worked for the biotechnology corporation Genentech in San Francisco, as well as other companies. But those jobs dried up when the recession hit in 2008 and, with a newborn baby, Garcia looked to other employment opportunities.

El Centro provided just such a chance for a new start. Since moving here 13 years ago, Garcia has been able to open a thriving law firm, get involved with multiple service organizations, successfully seek public office and, with his wife, raise three children in an environment that is a far cry from the East LA of his childhood.

“The best opportunity that I got was here in El Centro,” Garcia said. “And that’s why I made this my home and that’s why I’ve been here ever since.”

As a City Council member since 2016, Garcia said he can point to a long list of accomplishments that he and his colleagues on the dais had set as goals and seen to fruition. Those include extensive renovation projects at multiple parks and the construction of new recreational facilities, as well as the construction of the southbound Imperial Avenue exit on Interstate 8.

About the only regret Garcia will concede to is his arrest for driving under the influence in May 2019. He said the incident represents a mistake in judgment, “probably the lowest point in my life,” and will likely present a liability as he seeks the office of the district attorney.

“But that never affected my career or advocacy for the community or position on the City Council,” he said. “That’s something that I have moved past, thank God, with the ability of my friends and family.”

Next
BOYS BASKETBALL: Tabarez Brothers Take Tenacity to the Court