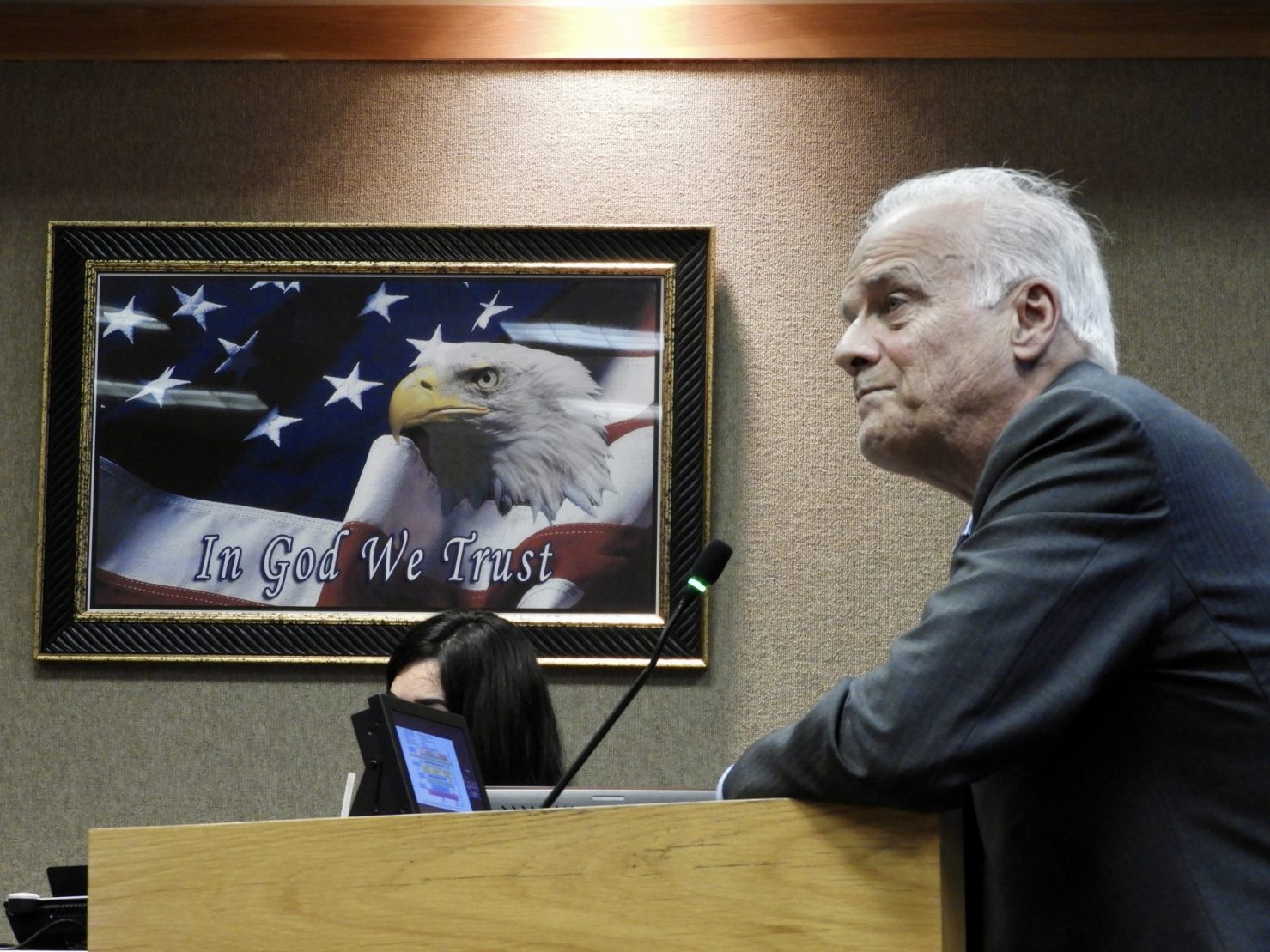 EL CENTRO — For the first time in the 20 months of the ongoing pandemic, the county of Imperial hosted a presentation by Drs. George Fareed and Brian Tyson to speak on their treatment protocols, some of which advocate the use of therapeutics not sanctioned for use for COVID by the federal government.

Drama surrounded the presentation on Tuesday, Dec. 21, some of which started a day earlier when the Imperial County Medical Society, and by extension, the California Medical Society, sent a letter to the county board requesting the issue be removed from the meeting agenda.

It continued with a confrontation over refusals to wear a mask during the meeting, and at the end, District 4 Supervisor Ryan Kelley suggested a clinical study of Fareed and Tyson’s treatment protocols be funded by the Imperial County Local Health Authority Commission.

“There are treatment protocols you have established, and I know other physicians are doing it and not being vocal about it, but what about doing a clinical trial in Imperial County, with your protocol funded by a local health (authority)?” Kelley asked, addressing Fareed, of Pioneers Health Center in Brawley, and Tyson, of All Valley Urgent Care in El Centro.

“The Health Authority can actually do a retrospective study, they can look at all the patients that we treated, they can go through their demographics and history and put together a compilation of data going back and looking at all the charts and seeing what the outcomes are based on the treatment that they got. That’s typically how studies are done during a pandemic,” Tyson said.

The focus of their treatment protocols began with early treatment, with Fareed saying the first seven days after diagnosis are the most critical. Their treatments include monoclonal antibody infusions, which have U.S. Food and Drug Administration emergency-use authorization and involve manmade antibodies to help fight off COVID for any high-risk patients over 12 years of age.

Yet some of the more controversial treatments Fareed and Tyson have prescribed over the course of the pandemic are those drugs not authorized by the FDA for use in COVID treatment, such as hydroxychloroquine and ivermectin, among other treatments. Other treatment have included a host of anti-inflammatories, anticoagulants, antivirals, antibiotics, oxygen, and steroid treatments.

Where the doctors further deviate from conventional medicine is their continued assertion that masks and vaccines are harmful, two pillars of the medical and public health communities’ messaging on COVID protection.

To that end, part of Fareed’s presentation stated COVID is only spread when symptoms are present, that natural immunity is “one and done,” and that the vaccines are not safe for the public.

Tyson talked about the use of hydroxychloroquine among his anti-inflammatory treatment protocols, which is drug approved for the treatment of gout but can be highly toxic if taken incorrectly. It is not approved to treat COVID. Tyson further separated himself from mainstream medical advice by asserting masks are harming people and are a root cause of secondary bacterial pneumonia infections and have been known to grow strep pneumonia and Moraxella.

Tyson and Fareed both have stood strong with their treatment protocols, despite criticism from the Imperial Valley Medical Society, which released a letter to the county board as a press release on Dec. 20, with IV Medical Society president Dr. Theodore Affue admonishing the supervisors for holding the presentation.

“The Imperial County Board of Supervisors should not contribute to the dissemination of false or misleading information by legitimizing unproven treatments. We urge the Imperial County Board of Supervisors not to use board meetings as a platform to publicize information on COVID treatments that have not received an emergency use authorization or received full FDA approval. We also call upon our Board of Supervisors to be stewards of the science by promoting COVID vaccination and masking, which have proven to be effective at reducing COVID hospitalizations and deaths,” Affue writes in the letter.

Tyson responded to Affue’s comments, along with similar comments made by Dr. Adolphe Edward, chief executive officer of El Centro Regional Medical Center, becoming emotional during his presentation, and referring to the comments as attacks.

Regardless of whether Tyson’s assertions can be quantified, Imperial County’s COVID statistics are grim: the Public Health Department’s website reported five more lives have been lost since the Dec. 14 update, bringing the local death count to 792. Imperial County has 660 active cases as of Tuesday morning, and a positivity rating of 13.6 percent. The active cases include 567 new cases since last week, bringing Imperial County’s total case count to 33,986 cases of COVID.

Fortunately, no cases of the omicron variant that is now the most prevalent variant in the United States have been found in Imperial County of the test sequenced so far, according to the weekly variant report released Dec. 20.

Before Tyson and Fareed’s presentation even began, two of their supporters, Jarred Reeves and George Doilez Jr., both of whom have spoken at county board meetings before, clashed with Imperial County sheriff’s deputies, refusing to wear masks inside the building despite a statewide mandate. Supervisor Kelley came out to de-escalate the confrontation, reminding them that they were distracting from what was important.

“Dr. Fareed and Dr. Tyson are here, and they’re gonna talk about treatment, right? And so you want to distract from that conversation by trying to have this kind of confrontation?” Kelley asked them before being interrupted by Doilez.

After a few moments of discussion between Kelley and Imperial County Executive Officer Tony Rouhotas Jr., Reeves and Doilez agreed to end the conflict by agreeing to wear the masks during the meeting to meet the supervisors halfway. Reeves even went on to request that the other unmasked supporters give the same respect, both outside the county board chambers and just as the meeting began.

“We got two doctors that are fighting for every one of us out here. I know we don’t like these masks. I know we don’t have to wear them, they are not a law, but I’m going to ask each and every one of you please mask up today just get through this meeting,” Reeves said. “I know it goes against everything we stand for. I can’t believe I’m saying this, but just one day guys.”

The county Health Authority Commission could not be reached for comment over the possibility of a clinical trial at this time.