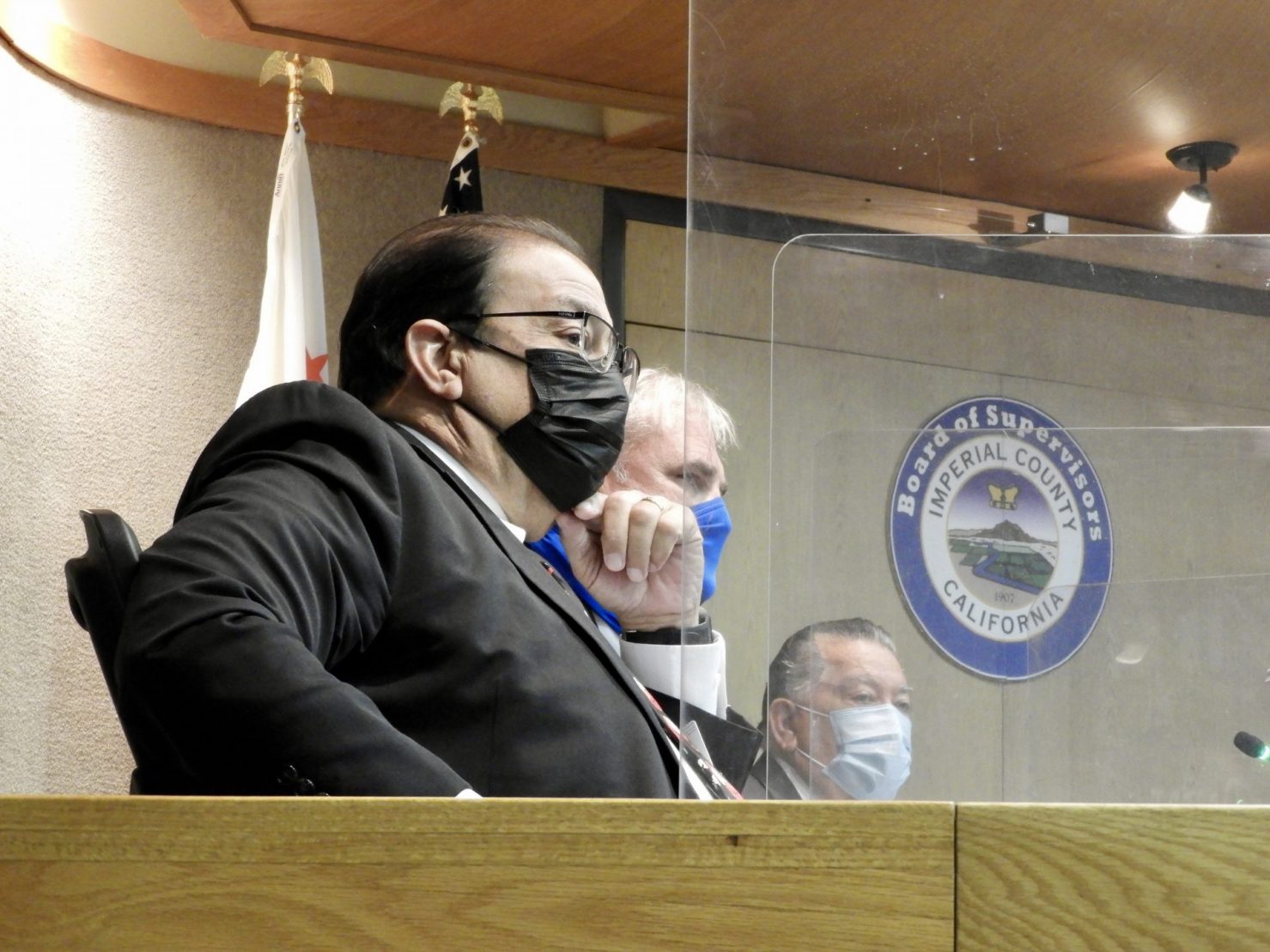 Plancarte listens closely to the details of the discussion for a Lithium Valley Master Plan during the Board of Supervisors meeting on Tuesday, Dec. 21. | MARCIE LANDEROS PHOTO
Home
Regional News
In Regional News

Document Would Address Zoning Laws, Other Issues That Could Bog Down Process

EL CENTRO — The early steps of a Lithium Valley Master Plan meant to guide and expedite the process of developing Imperial County’s geothermal resource around the Salton Sea for mineral extraction, most notably lithium, was set in motion by the county.

The Imperial County Board of Supervisors voted unanimously approved directing its Lithium Valley consultant Michael Bracken, managing partner of Development Management Group Inc., to release a request for quote (RFQ) to create the master plan during the county board’s meeting on Tuesday, Dec. 21.

“The action is to authorize the plan for Mr. Bracken’s office to release an RFQ for consultants on a specific plan and automatic DIR (Department of Industrial Relations) over the lithium extraction and geothermal area other ancillary uses,” District 4 Supervisor Ryan Kelley said as he introduced the agenda item.

The Imperial County geothermal area in discussion is a 6,000- to 8,000-acre area at the southern end of the Salton Sea, which is currently zoned as agricultural land. This zoning allows for the geothermal plants, but not for mineral extraction, which is limited to industrial zones only.

The purpose of the plan is to expedite the development of lithium extraction from geothermal plants by addressing issues like these zoning laws, which currently forces potential projects to individually address zoning issues, bogging down the process, said Jim Minnick, Imperial County Planning & Development Department’s Services Director.

“We have 11 geothermal plants out there right now, physically, and there are all flash plants, they all have the ability to create a mineral recovery component. Problem is we don’t allow no (sic) mineral recovery components outside of the industrial area, but we allow geothermal on the (agricultural) area. So, each one of those projects that come in and want to do mineral recovery, there’s going to have to be a zone change, a general plan amendment, and (conditional use permit). If we create a specific plan covering the whole thing, we eliminate all those things and it may just be a CUP,” Minnick said.

County officials also expressed hope that the development of a plan will help entice lithium and other rare mineral extraction companies to develop in the geothermal area by more clearly defining the cost of development versus the potential profit to be made in developing a mineral extraction facility in Imperial County.

“There’s no free lunch. The first week of January, Director Minnick and I are scheduling meetings with various lithium and rare mineral extraction companies to talk to them about their financial participation in these plants, the specific plan, and the environmental impact report, because they will benefit from this,” Bracken said via Zoom during the meeting.

All of the supervisors seemed to be on board with this plan, as it would allow the county to be able to more closely control development, versus the piecemeal development that would occur without the plan. Furthermore, the plan will help insure the equal and fair participation of companies in the cost of development, including the costs of any mitigation measure deemed necessary after the plan has been composed.

“I think this a great opportunity one way or another, we will get it funded, whether it’s with their participation going in or their participation on the tail, then it’s just a matter of where we do,” District 2 Supervisor Luis Plancarte said, signaling his support for the development of this new master plan.