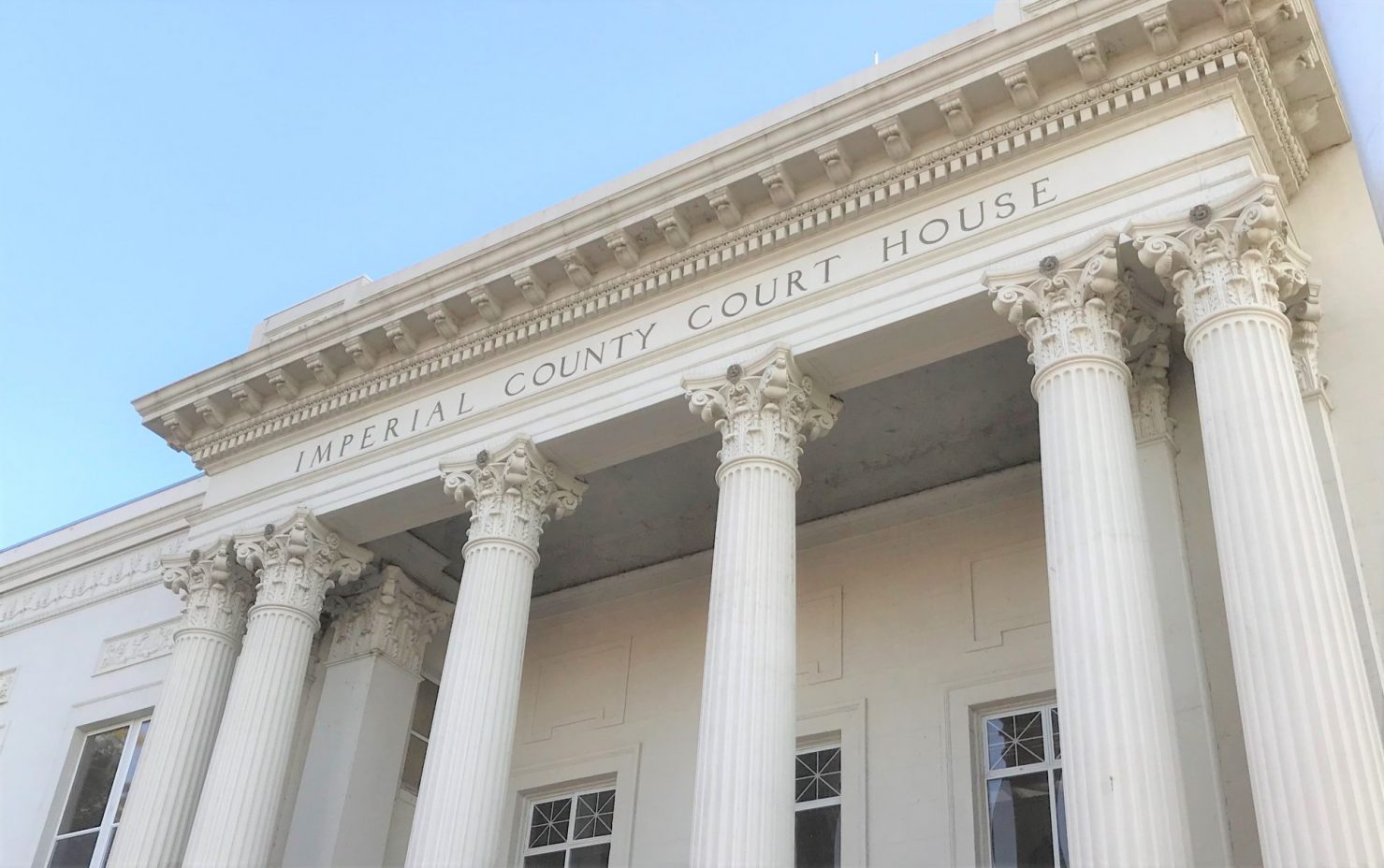 EL CENTRO — After a 2018 drug-related conviction prompted the recent deportation of a former Valley resident, the 52-year-old ex-lawful permanent resident from Mexico is getting a chance in court to potentially negotiate a deal that could pave the way for his stateside reunification with his family.

That pending chance in court resulted from a local Superior Court judge granting a defense motion to vacate David Enrique Gavilanes’ felony conviction for his August 2018 arrest for possession of methamphetamine for sale.

In granting the motion to vacate Gavilanes’ felony conviction, Judge Poli Flores Jr. allowed Gavilanes to withdraw his previous no contest plea and face a new trial for his August 2018 arrest for possessing 28.6 grams of meth for sale.

The hoped-for outcome of a new trial is that Gavilanes will be able to negotiate a disposition with the county District Attorney’s Office that does not result in an aggravated felony conviction that will subject him to deportation, as before, court records stated.

“You’re back to square one with the original complaint,” Flores told Gavilanes during the motion’s hearing at the El Centro courthouse on Monday, Dec. 20.

As part of his August 2018 no contest plea, Gavilanes was sentenced to 90 days in jail and three years of probation.

In September 2020, he was ordered by Immigration and Customs Enforcement to report to the Imperial Regional Detention Facility in Calexico to appear before an immigration judge for a deportation hearing stemming from his 2018 conviction.

That conviction is characterized as an aggravated felony and, as such, makes Gavilanes eligible for deportation under the provisions of the Immigration and Nationality Act of 1952.

Gavilanes spent about a year in immigration detention contesting his removal order before being deported to Mexico this year.

He is currently residing with a relative in Mexicali and appeared remotely in court on Dec. 20 via Facebook messenger.

A new trial could subject him to a potential three-year sentence, which Gavilanes is more than willing to accept, so long as it doesn’t adversely impact his previous lawful permanent residence status, county Deputy Public Defender John Harter stated in court pleadings.

“In other words, in order to secure an immigration safe outcome for this case, Mr. Gavilanes will have completed probation for this case, suffered over a year of immigration custody because of this case, and then, after all that, is literally begging the District Attorney’s Office to let him serve three years in jail in this case,” Harter stated, with added emphasis, in a pleading filed with the court.

In his pleadings, Harter was also critical of the DA’s Office, contending that the agency was refusing to negotiate a so-called “safe plea agreement” in violation of state law that recommends prosecutors “consider the avoidance of adverse immigration consequences” during plea negotiations.

In order to secure an immigration safe outcome for this case, Mr. Gavilanes will have completed probation for this case, suffered over a year of immigration custody because of this case, and then, after all that, is literally begging the District Attorney’s Office to let him serve three years in jail in this case.”

His motion to vacate the conviction had further argued that in 2018 Gavilanes and his public defender had not understood how Gavilanes’ plea deal would adversely impact his immigration status.

At that time, Harter contended, the public defender was mistakenly under the impression that a conviction in California for possession of meth for sale would not warrant deportation because of a discrepancy that existed between how the state and federal government defined methamphetamine.

Yet, in making his ruling, Judge Flores largely discounted Harter’s arguments about how the DA’s Office was violating state law by failing to negotiate a modified conviction. Flores instead asserted that such negotiations are supposed to take place during the plea bargain phase and not post-conviction.

Flores also largely dismissed Harter’s assertion that it could be presumed that both Gavilanes and his then-public defender entered the no contest plea because they believed the discrepancy between state and federal law regarding methamphetamine meant Gavilanes’ state conviction would not make him eligible for deportation.

Instead, Flores said the key issue for the court was whether the defendant understood whether his no contest plea and subsequent conviction had the potential to adversely impact his immigration status.

On that point, Flores appeared to have sided with Harter, who argued that Gavilanes’ yearlong and unsuccessful immigration court battle to prevent his deportation highlighted his passion for wanting to remain in the United States.

And though a declaration that Gavilanes filed with the court made no mention of his state of mind when he entered the no contest plea, Flores stated that the court is allowed to consider additional “contemporaneous evidence” when determining whether a conviction is invalid.

“In this case it is substantial,” Flores told counsel. “Defense counsel made the point, we have a defendant who in fact for all intents and purposes is as much an American as anybody else. The court finds that this defendant, given his ties to the United States, could not have understood the long-term consequences.”

Prior to Flores’ ruling, county Senior Deputy DA Martin Gonzalez argued that Gavilanes signing the plea agreement form was indication enough that he understood the consequences of his no contest plea in 2018.

Defense counsel made the point, we have a defendant who in fact for all intents and purposes Is as much an American as anybody else. The court finds that this defendant, given his ties to the United States, could not have understood the long-term consequences.”

Further, Gavilanes had responded in the affirmative when the case’s presiding judge has asked him if he understood the consequences the plea deal and conviction would have on his immigration status, Gonzalez told the court.

During the Dec. 20 court hearing, Judge Flores also indicated that the local court’s plea forms do include language that advises a defendant of the possibility of being deported because of an aggravated felony conviction, but that the form does not contain explicit information about which aggravated felonies make convicted offenders eligible for deportation.

Such explicit instruction is found on the forms that the San Diego County Superior Court system uses, he said.

Gavilanes was just a few months old when he was admitted to the United States as a lawful permanent resident in January 1969. His mother and children live stateside, as well.

Gavilanes is scheduled to appear in court for a readiness conference on Jan. 5 at the courthouse in Brawley. Deputy Public Defender Harter said he would arrange to have Gavilanes attend the court hearing in person.

Acting as a private citizen, and not in his capacity as a deputy public defender, Harter emailed three local district attorney candidates on Friday, Dec. 17 to inquire about their respective positions regarding the DA’s Office’s commitment, under their respective potential stewardship, to negotiate safe plea agreements and post-conviction modifications for non-citizens.

In his emailed response, Vela indicated that as a native of Mexicali, he is uniquely positioned to understand the impact that immigration consequences have on the Imperial County community.

He further stated that the law required him to consider immigration-safe plea agreements and that he would continue to do so.

“I agree that immigration consequences are often the most important issue to a Defendant, but in the interests of justice, I will continue to weigh that against the needs of the public, the community, and especially the victims,” Vela stated. “(I)f elected, when my office is considering plea agreements for Defendants who are facing severe immigration consequences, we will always consider immigration safe pleas — if and when the interests of justice are not compromised, the victim’s wishes are honored, and the safety of the public is not at risk.”

It was not clear whether the other two candidates, county Deputy Public Defender George Marquez and local attorney and El Centro City Council member Edgard Garcia, had responded to Harter’s inquiry.

Neither Harter, Marquez nor Garcia responded to this newspaper’s request for comment about the matter.