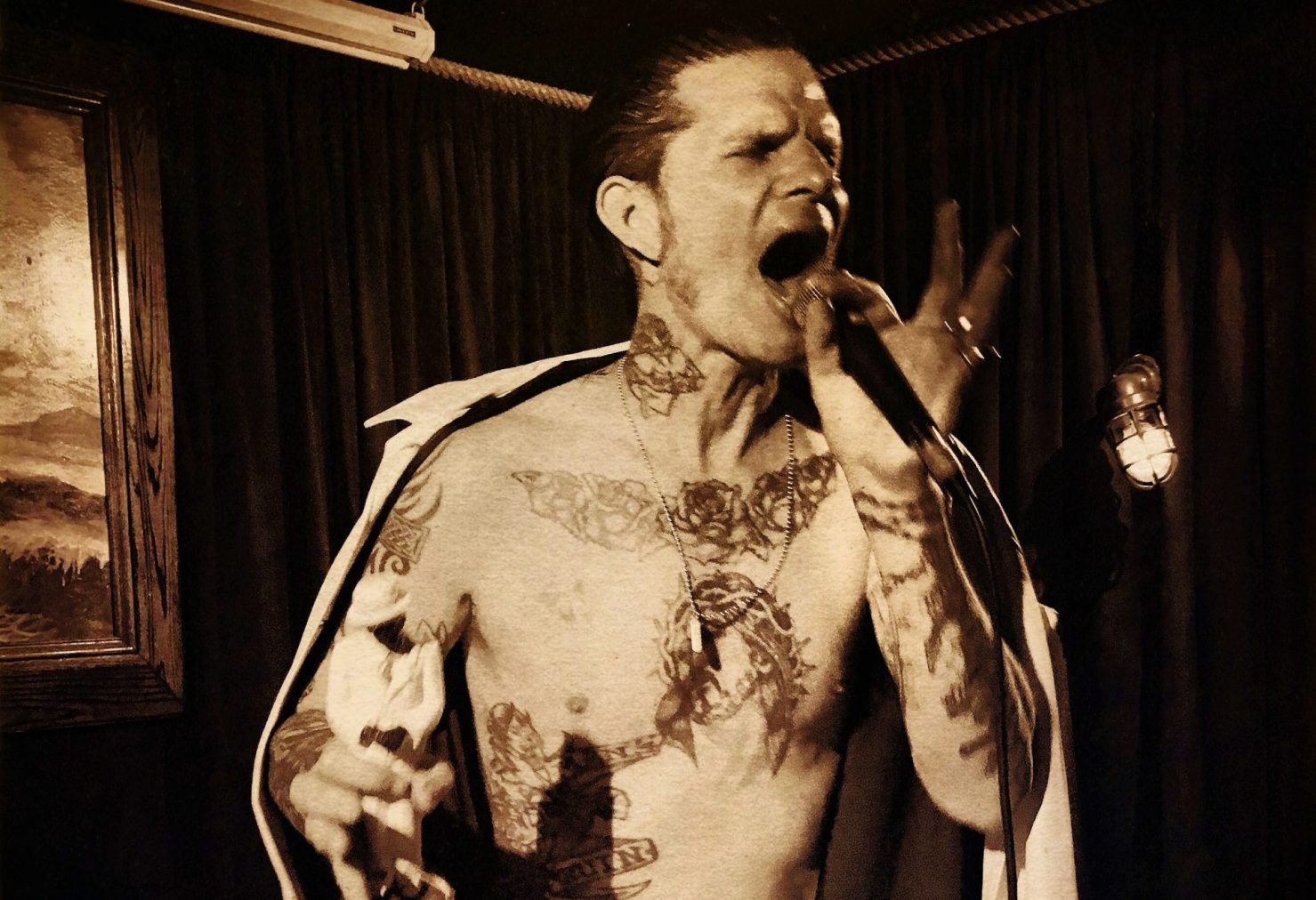 Musician Talks About “Calexico and Mexicali”; His Love for Mexico

Sean Wheeler is a punk rock lifer, with some 40 years on stage singing in bands. He’s had near brushes with mainstream success in the early 2000s, but for the most part, he’s one of the most well-regarded front men you’ve never heard of.

In that time, as the singer and leader of Coachella Valley’s Throw Rag, which did some time on the Vans Warped Tour and even had a song appear on a Warped Tour compilation in 2002, and in various solo and other projects over the years, the 55-year-old Wheeler has gained quite the reputation as a hell of a stage performer.

It’s fitting that this whirling dervish of old-school punk-rock energy and his maniacal carnival barker antics would land him the gig as master of ceremonies at Strangers and Co.’s 16th annual Viva El Valle music and art show on Thursday, Dec. 23 at The Vice Event Center in El Centro.

Born and raised in Palm Springs, where he still lives in the same house he was raised in, the man referred to as a “Desert Legend” has a connection to Viva El Valle and the Imperial Valley through one of those individuals credited with making the music and art show happen, Marco Vera of Mexicali, and one of the current event organizers, Felipe Stranger (not his real last name, but think: The Ramones).

“I met Felipe and Marco from Mexicali Rose, I think, the first or second Desert Daze (music festival in Joshua Tree) down here when it was still like just in little bars and stuff, and they were like, ‘Dude, we do stuff (shows) in Mexicali and Calexico,’ and (I said,) ‘I want to come.’ So that was it, man. We were down there, and we’ve been friends ever since; all of us,” Wheeler said in a recent phone interview from his Palm Springs home. Felipe was “like, will you be the master of ceremonies … And I’m like, ‘yeah, of course.’”

Wheeler recently served as emcee of the Muddy Roots music festival in Cookeville, Tennessee, a multi-day independent music festival with genre-spanning acts from punk and ska, to Americana, psychobilly and other styles, not too dissimilar to Viva El Valle, which has an independent streak through it, from the type of musical acts featured to the artists showing their works.

“I just like being involved, participating in anything to be honest with you when it comes to art and music, so I’m just stoked. I’m actually I’m looking forward to the drive. I’m looking forward to cruising down (Highway) 86, tripping on the Salton Sea, rolling into El Centro; I like that drive a lot,” he said. “So, that’s going to be beautiful.”

Wheeler is also excited to see quite a few friends in town to perform on stage and show their art.

He was a perfect choice for the job of emcee, said Felipe, one of a five-member committee of organizers behind Viva El Valle, who, like Wheeler, was born to talk. Felipe was the lead singer behind a great early 2000s local punk band in the vein of The Spits, called Slab City.

“He’s a good hype man, you know what I mean? The guy is funny, he’s charismatic; he’s a good talker,” Felipe said.

Vera, who now lives in Los Angeles, also sees Wheeler’s command of the stage lending itself well to Viva El Valle. In a brief interview, Vera spoke of seeing the singer performing with all sorts of groups, including Sean Wheeler and the Reluctant Messengers and dynamic and outlandish performances with Brant Bjork, a former member of the influential Kyuss (with Queens of the Stone Age’s Josh Homme) and Fu Manchu.

Being part of the high and low desert music scenes that really started to explode in the late 1990s though the mid- to late 2000s, Wheeler has forged deep connections to well-known musicians over the years, but he has also found an affinity for places like Mexicali and the Imperial Valley.

Musically, Wheeler keeps busy with several bands, a solo career and guest appearances on other people’s records. During an interview with this newspaper, he declined a call from Matt Hensley, the former pro skater and longtime accordionist for Celtic punkers, Flogging Molly, who asked Wheeler to be on his record.

Over the years, Wheeler and Throw Rag have been credited with projects with harder-edged musicians or shared stages with bands like the Damned, Motorhead or Queens of the Stone Age, yet for more than a decade, Wheeler’s music has veered more toward Americana and roots music.

One of his connections to the Imperial Valley came when he was performing in an acoustic duo with Zander Schloss, a former member of the Circle Jerks who had recorded with Joe Strummer from the Clash.

Together they recorded and filmed a video for the song, “Calexico & Mexicali,” in which Felipe appears both in a Chinese restaurant and at a Mexicali Rose party. The video itself was directed by Vera, filmed in the previously mentioned locations and at the former Santo Tomas Swap Meet.

Wheeler and Schloss, who Wheeler no longer has a working relationship with, had come to the area and grown fond of the vibe of Mexicali and Calexico. Wheeler spoke of the roots of the song and the making of the video.

“Over in Pueblo Nuevo, we’d go to Mexicali Rose and play. We just fell in love with the community and the folks; Felipe was in Calexico. … Zander wrote it and I said we gotta make a video, so we got Marco and another dude (Ruben Garcia Marrufo) … We just bombed the f***ing Calexico swap meet,” Wheeler said, laughing.

As Wheeler mentioned, Schloss wrote most of the song, but Wheeler said he made some lyrical and vocal contributions that he feel mellowed out some of the more negative lyrical content Schloss was pushing.

“Zander wrote most of it, but I had a couple lines in there. I always heard like cachanilla is like the slang word for someone from Mexicali,” Wheeler said, breaking into his part of the song. “‘Running with the cachanillas down in Pueblo Nuevo.’”

Zander “had some lyrics that were like, a little too stereotypical. … you know, like, hookers and gambling, or whatever. I mean, he understands the beauty of the song, don’t get me wrong. … But it has to be about all beautiful sh*t. It should not be about any f***ing stereotypes. That’s stupid,” he said. “That’s what the song is, it’s a beautiful celebration of life.”

The style of that song is nowhere near where Wheeler has gone in his varied discography. Yet if one looks back on his career, it’s not entirely foreign.

Throw Rag, though punk to the bone, featured a washboard player, banjo, vibraphone and upright bass. Fast forward to work his own solo albums that feature spirituals and his work with Joe Buck, who was Hank Williams III’s guitar player.

Wheeler is unconventional and eclectic, but always looking toward American music’s roots. His 2017 solo album, “Sand in My Blood,” is a good example.

“Even back then growing up, I was always tripping on music. I love music man. So especially like Golden Voice (music promoter) back then, when they were doing those early shows, they will put some different kinds of bands together. In 1984 I was in like 11th or 12th grade, band like the Stray Cats, bands like the Smiths, then like in 1985 with bands like the Bad Brains, that quickly opened us up to reggae, dancehall, everything,” he said. “I was always just kind of like, trying to spread my wings a little bit”

Not long after Viva El Valle, Wheeler will head down to Mexico, where he has a band. Oddly, Wheeler has what seems like on-call musicians in different cities. For example, he said he performs the same music with one band in LA and has another in Austin, Texas.

In Mexico City, he has an entirely different group he will return to soon, Sean Wheeler y Los Caminos. He has also put together a music festival called Wheeler Fest, which started in 2019. Mexico is just a place he loves to be, basically held by its spell since playing Mexico City and Hermosillo with Brant Bjork’s band.

“Mexico City is bada**. So, I was trying to look for ways to get back there all the time. I brought one of my bands there, The Reluctant Messengers, and then I go, you know what? F*** it, I’m just gonna make a band here,” he said. “I love Mexico and that’s why I go there, you know? I mean, that’s why I’m there. I want to be there, which is trippy dude. It seems saner than the States to me a lot of times. That’s a trip.”