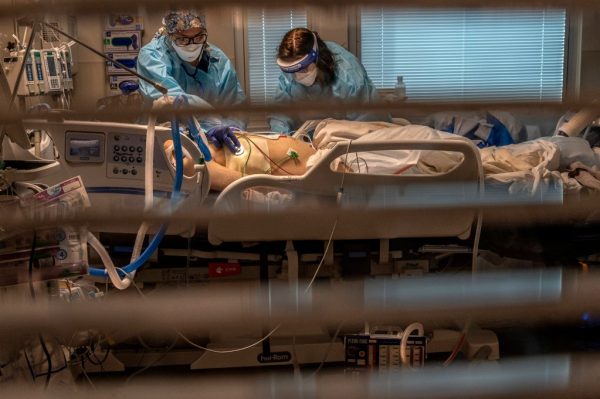 Give to CalMatters today and your gift will be doubled! Your support helps keep our nonprofit journalism free and accessible to all Californians.

Note: The newsletter is taking a break for the holidays. Look for Emily’s regular newsletter to return on Monday, January 3, just in time for the start of the new legislative session.

COVID is unrelenting: You can have been super-careful for months on end, but you let your guard, and mask, down at an office holiday party and get infected with the surging omicron variant.

And what if you go to the hospital for minor surgery and contract the virus there?

In a blockbuster investigation by Kaiser Health News, Lauren Weber and Christina Jewett reported Thursday that hospitals with “high rates of COVID patients who didn’t have the diagnosis when they were admitted have rarely been held accountable due to multiple gaps in government oversight.”

The story focuses on Riverside Community Hospital, where the investigation found that 4% of Medicare patients with COVID were infected after admission, double the national average. The reporters interviewed actress Jodi Evans, who was admitted after a horseback fall in May 2020. About a week into her stay, she tested positive. She was hospitalized for a month, and says she racked up more than $1 million in bills and is suffering from long-haul symptoms.

SEIU-United Healthcare Workers West is suing the hospital on behalf of staffers, who claim they were forced to work without protective equipment, which “created an unnecessarily dangerous work environment, which in turn has created dangerous conditions for patients.”

The hospital is fighting the lawsuit, saying that the plaintiffs are only speculating that they contracted the virus at the hospital, and arguing that the court should not step into the place of “government agencies who oversee healthcare and workplace safety”

But the investigation also found that even when state inspectors reviewed California hospitals with high rates of post-admission COVID, they identified few shortcomings.

This latest eye-opening look at how the healthcare system is dealing with COVID comes as the omicron variant sweeps across the nation and California, with spiking case numbers in Los Angeles, San Francisco and San Diego. On Thursday, the state Department of Public Health said that there is “likely community transmission” of omicron in most of the state, based on testing of wastewater and at least three health systems reporting that the variant comprises 50% to 70% COVID cases. On Wednesday, Gov. Gavin Newsom outlined more testing and vaccination requirements to try to limit what he called a fifth wave.

California has administered 63,497,746 vaccine doses, and 70.5% of eligible Californians are fully vaccinated.

Joan Didion, the quintessential observer and commentator on California, died Thursday at 87 — and the tributes poured in from near and far.

The Los Angeles Times obituary called her a “celebrated prose stylist, novelist and screenwriter who chronicled American culture and consciousness with cool detachment, humor and a brittle awareness of disorder.” The New York Times said “her sharp dispatches on California and tough, terse novels forged a distinct new voice in American writing.”

Gov. Gavin Newsom said in a statement: “While we mourn this great loss, Californians can celebrate Joan’s tremendous contributions to the arts through her work. California belonged to Joan Didion; we cherish her memory.”

While Didion went on to international fame and fortune, she was California born-and-bred. Didion’s ancestors traveled west with the original Donner Party in the mid-1800s and settled in Sacramento, where she was born at Mercy General Hospital on Dec. 5, 1934.

In a 2011 interview with SacTown magazine, Didion talked about going to Vic’s for ice cream and learning to swim in the Sacramento and American rivers. “I would have to say the rivers are my strongest memory of what the city was to me,” she said. “They were just infinitely interesting to me. I mean, all of that moving water. I was crazy about the rivers.”

Her memories helped inspire those involved in “Lady Bird,” the 2017 movie made by Sacramento’s own Greta Gerwig. Lead actress Saoirse Ronan told CapRadio that she had “been given a lot of Joan Didion to read in the year leading up to the shoot. Just to get the idea of the sort of mindset of a Sacramentan.”

Didion attended McClatchy High, where she wrote about weddings for the Sacramento Union society pages, then majored in English at UC Berkeley. As a writer, she often focused on California.

In “Slouching Towards Bethlehem,” the 1968 collection of essays that put her firmly on the literary map, she describes her experiences in the Golden State during the 1960s and writes about John Wayne and Howard Hughes, Death Valley and Haight-Ashbury. In her 2003 memoir “Where I Was From,” Didion explores California’s relationship with land and water, as well as its debts to railroads, aerospace and government.

A personal note: Like many aspiring writers, I read “Slouching Towards Bethlehem” early in my journalism career, along with the works of other “New Journalists” such as Tom Wolfe and Gay Talese. I read it again when I moved to California a decade ago. Thursday, I dug the paperback out of my garage for more of her style and wisdom.

A fan Twitter account posted these words from the book: “Our favorite people and our favorite stories become so not by any inherent virtue, but because they illustrate something deep in the grain, something unadmitted.”

It isn’t a secret that racial inequalities persist in California and America.

So a new study tries to give a broader picture of those differences, reports Jesse Bedayn of CalMatters’ California Divide project.

The study’s authors go beyond the typical measures of economic success such as unemployment rates. Rather, they use the American Human Development Index, which also looks at education levels, life expectancy and income and assigns a score from one to 10 that signifies a group’s access to a “freely chosen life of value.”

As Jesse writes, while the typical Californian has a higher score on the index than the national average, the top 1% of Californians score a 9 or higher, while more than 30% of the population scores below 5, lower than the average American.

Advocates hope those choices include more money for public health and programs to shore up the safety net. But they also want more spending targeted to specific racial groups.

Kristen Hwang explains California’s new law making it illegal to remove a condom without consent in another “New law in a minute” video.

2021 health care stories you should know

A lot happened this year in health care in California. Here’s a look back at some of the most important developments, as reported by CalMatters’ Ana B. Ibarra.

COVID-19 continued to dominate the news and much of daily life, even as Californians learned to co-exist with the pandemic. Masks are still required on public transportation, in schools and businesses in many places. But large public gatherings such as sporting events and concerts resumed and tourism was nearly double the previous year.

On June 15, Gov. Newsom lifted the state’s remaining public health restrictions allowing Californians to revert to “business as usual.” By the summer, however, the more contagious delta variant prompted another surge in cases just as demand for vaccines dropped. In response, Newsom announced a first-in-the-nation COVID vaccination mandate for health workers and ordered state employees to get shots or get tested. He later required K-12 students to be required to get vaccines, a move that incited protests among parent groups.

Then on Dec. 1, officials announced that the first confirmed U.S. case of the omicron variant had been detected in a traveler who returned to San Francisco from South Africa. And on Dec. 15, an indoor mask mandate was extended statewide again, until Jan. 15, in response to a 47% increase in cases since Thanksgiving. But Newsom declared that more lockdowns, like the ones last winter, are unlikely. On Dec. 22, however, he did announce a vaccine booster requirement for health care workers.

In total, since the start of the pandemic, California has reported nearly 5 million COVID-19 cases and more than 75,000 deaths, with about 70% of eligible residents fully vaccinated.

In other health developments:

Check out the full CalMatters Primer, with everything you need to know and might have missed about California policy and politics in 2021.

And here’s a look at some health stories to watch for in 2022:

(Whatmatters by Foon Rhee first appeared on CalMatters and is made available through the CalMatters Network.)