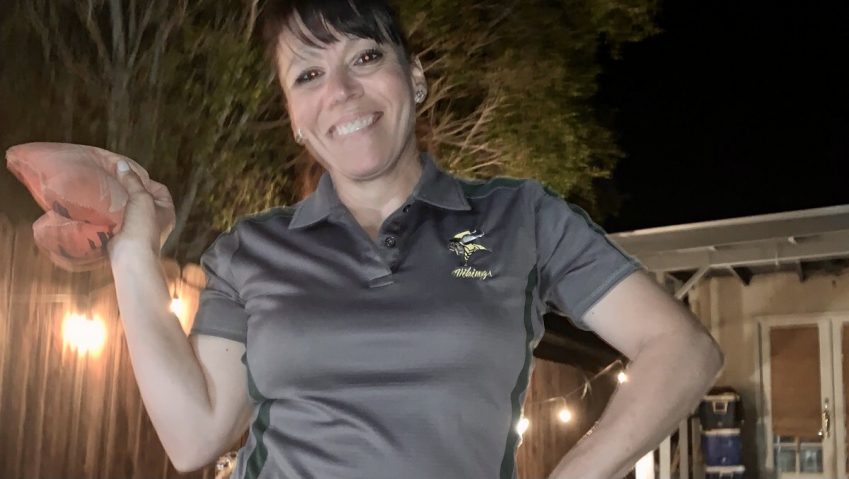 Holtville’s Martha Soto has been playing and excelling at cornhole for several years and now a benefit cornhole tournament is planned for Jan. 15 to help her pay for medical expenses associated with her Stage 4 lung cancer diagnosis. | SOTO FAMILY COURTESY PHOTO
Home
Sports
In Sports

HOLTVILLE — The last name that was consistently an athletic force for Holtville during the 1980s and ’90s was Ibarra. For close to 20 years at least, one of 10 siblings was at Holtville High School helping guide the Vikings in either a boys or girls sport.

During those two decades, many friendships were formed and the name became synonymous with Holtville. Now, when one of them is in need, it’s no surprise the community is rallying around to help.

Martha (Ibarra) Soto was diagnosed with Stage 4 lung cancer in late November. She has worked for the Holtville Unified School District for 21 years and currently serves as the office manager at Holtville High School.

She is the oldest of the six female siblings, graduating from Holtville High in 1987 and staring on the volleyball and basketball courts as well as the softball field.

A benefit cornhole tournament is scheduled for 10:30 a.m. on Jan. 15 to help Martha and her husband Cosme pay for the medical expenses. The cost is $25 per player and all entry fee money will go to the family.

Also at the event will be a drawing for prizes, a long-toss competition and awards will be given to the top two teams. Food and drink will be available, including pulled pork sandwiches and tacos. The event will take place at 1745 Haven Road, located just south of Holtville. Those interested can contact Tony Ibarra at 760-222-5626.

Those who can’t make it to the event but still wish to help can donate to Martha’s GoFundMe page organized by her daughter.