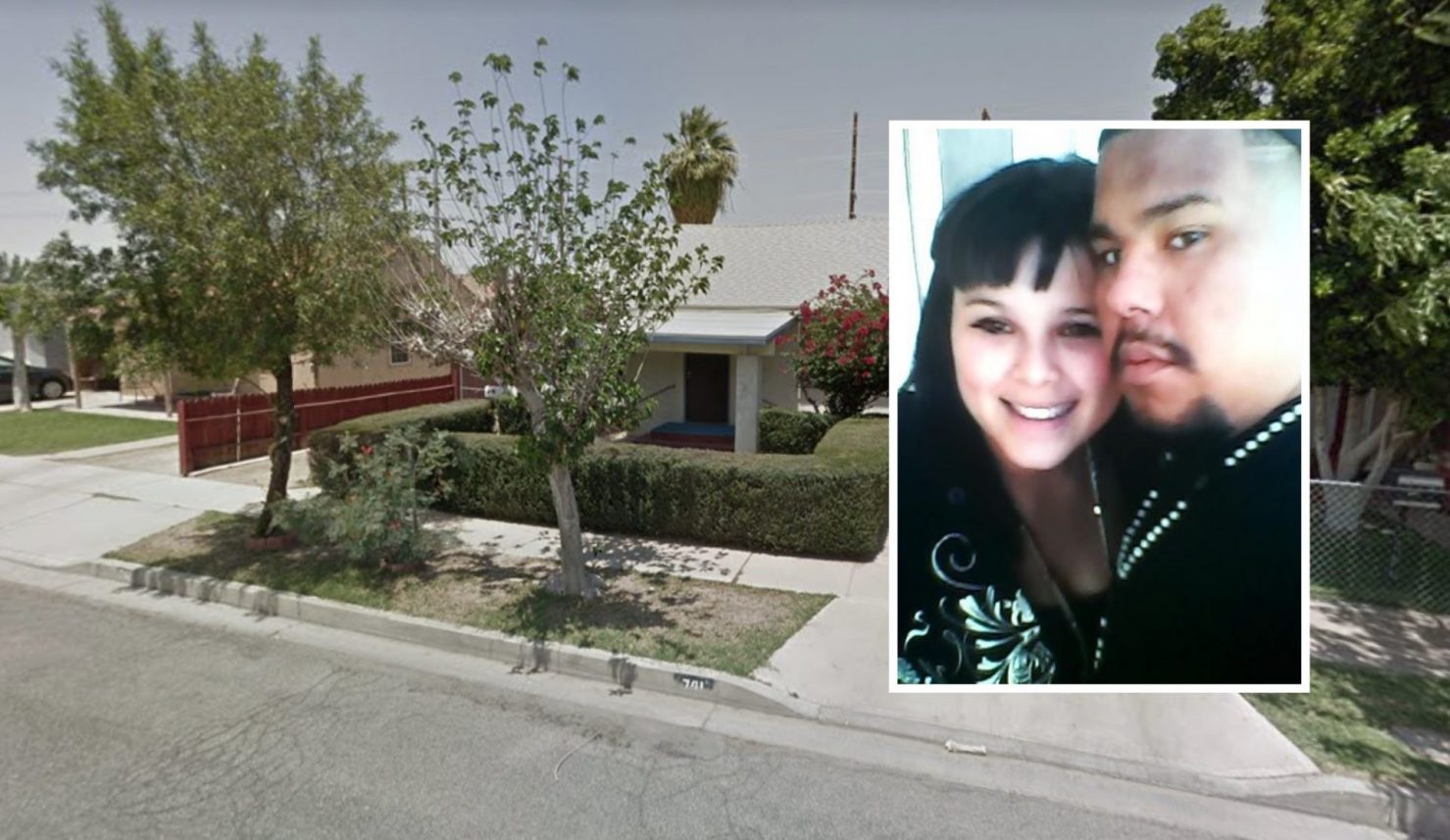 A Facebook photo from 2012 of a then-16-year-old Jose Cervantes and a then-14-year-old Jajaira Marie Solano, the Brawley couple who died in a Christmas Eve, Dec. 24, murder-suicide in the East Adler Street home (shown) they shared with their three children, is shown. | GOOGLE AND FACEBOOK IMAGES
Home
Regional News
In Regional News

BRAWLEY — A young couple that died in the Christmas Eve murder-suicide apparently had a troubled relationship, according to a neighbor who said the shooting followed a daylong holiday gathering.

Although Brawley police have not elaborated further on what led to the shooting that killed 23-year-old Jajaira Marie Solano and 25-year-old Jose Cervantes late on the night of Dec. 24, a neighbor in the 700 block of East Adler Street who asked not to be identified painted a picture of an unhealthy relationship in which verbal altercations were not an uncommon occurrence.

“They argued a lot,” the neighbor told this newspaper in Spanish on Tuesday, Dec. 28. “They had problems.”

Though the Brawley Police Department has not released any new information about the fatal incident, its initial press release on Monday, Dec. 27 stated that the home’s occupants had been arguing prior to the shooting.

Around 11:40 p.m. Christmas Eve, the press release states officers were called to a residence in the 700 block of Adler Street after reports of shots being fired.

“When officers arrived on scene, they learned that a man and a woman had been arguing inside a bedroom when two gunshots were heard,” according to police. “Officers entered the residence and located two individuals, one male adult, and one female adult, who had both sustained apparent gunshot wounds.”

Although no one official sources have directly stated who did the shooting, it’s implied that Cervantes was the shooter, not just from things written on social media postings and statements from Solano’s family, but also on a fundraising site set up to pay for Cervantes’ funeral costs by his uncle.

“No one really know(s) what the real reason why he did this. So please keep your opinions to yourself. This is a really sad tragedy,” stated Armando Cervantes, who was the organizer of the page.

On Monday, Solano’s family issued a brief statement attributed to her oldest cousin, Carlos Gonzalez, also the organizer of her fundraising page.

“We would just like for Marie to be remembered for who she was, a happy, outgoing, loving mother, daughter, granddaughter, cousin and aunt,” said Gonzalez in an email to the Calexico Chronicle. “She will be deeply missed. She was 23 years old full of life, she lived for her three kids who were her world, she was a happy soul, always smiling and making friends everywhere she went.

“Thank you to everyone for all the support we’ve been receiving,” he added.

Meanwhile, the Adler Street neighbor spoke further on the couple and what they witnessed of Solano and Cervantes’ relationship.

The pair had resided at the home for about a year. On the day of the incident, relatives of both Solano and Cervantes had gathered at the home during the day, the neighbor said.

The extended families’ gathering had started off pleasantly enough, with fireworks and family members posing for pictures with an inflatable Grinch yard decoration that Cervantes had rented for the occasion, the neighbor said.

Most of the extended family members left as the day wore on. Around 9 p.m. that night, the neighbor recalled hearing Solano and Cervantes arguing on the front porch.

What transpired afterward remains unknown to the neighbor, who said they didn’t learn of the fatal incident until Christmas morning, Dec. 25.

“He made a bad decision because he left the kids without a mother,” the neighbor said. “That’s the saddest part.”

Cervantes was described by the neighbor as a doting father who went to great lengths to provide for the children and Solano, a homemaker. He enjoyed working on Honda vehicles underneath the car port on the side of the house and often would have a rotating cast of friends over.

Cervantes’ uncle and others have posted much of what the neighbor was saying about him.

“… ‘Pon’ (Cervantes’ nickname) was a great person. He will always be remembered as a kind, warm-hearted person. He always found a way to make people smile and laugh,” the uncle wrote. “He left behind three amazing young children behind. Which were the entire world to him. Even when things got rough, he would remain positive.”

Solano and Cervantes were said to have met when they were teenagers, the neighbor said. Photos from 2012 from one of multiple Facebook pages confirm that, placing Cervantes at 16 years old and Solano at age 14.

“He was very much in love with her,” they said, noting that they did not recall ever seeing the couple’s arguments evolve into physical altercations. “I never thought this kind of tragedy would occur.”

Each have GoFundMe sites set up for them by their respective families. Solano’s page has been set up by Gonzalez and Cervantes’ page was set up by Armando Cervantes.

The investigation into the incident remains ongoing, police stated. No other information is being released by police at this time. Anyone with information regarding the incident should contact the Brawley Police Department at 760-344-2111.