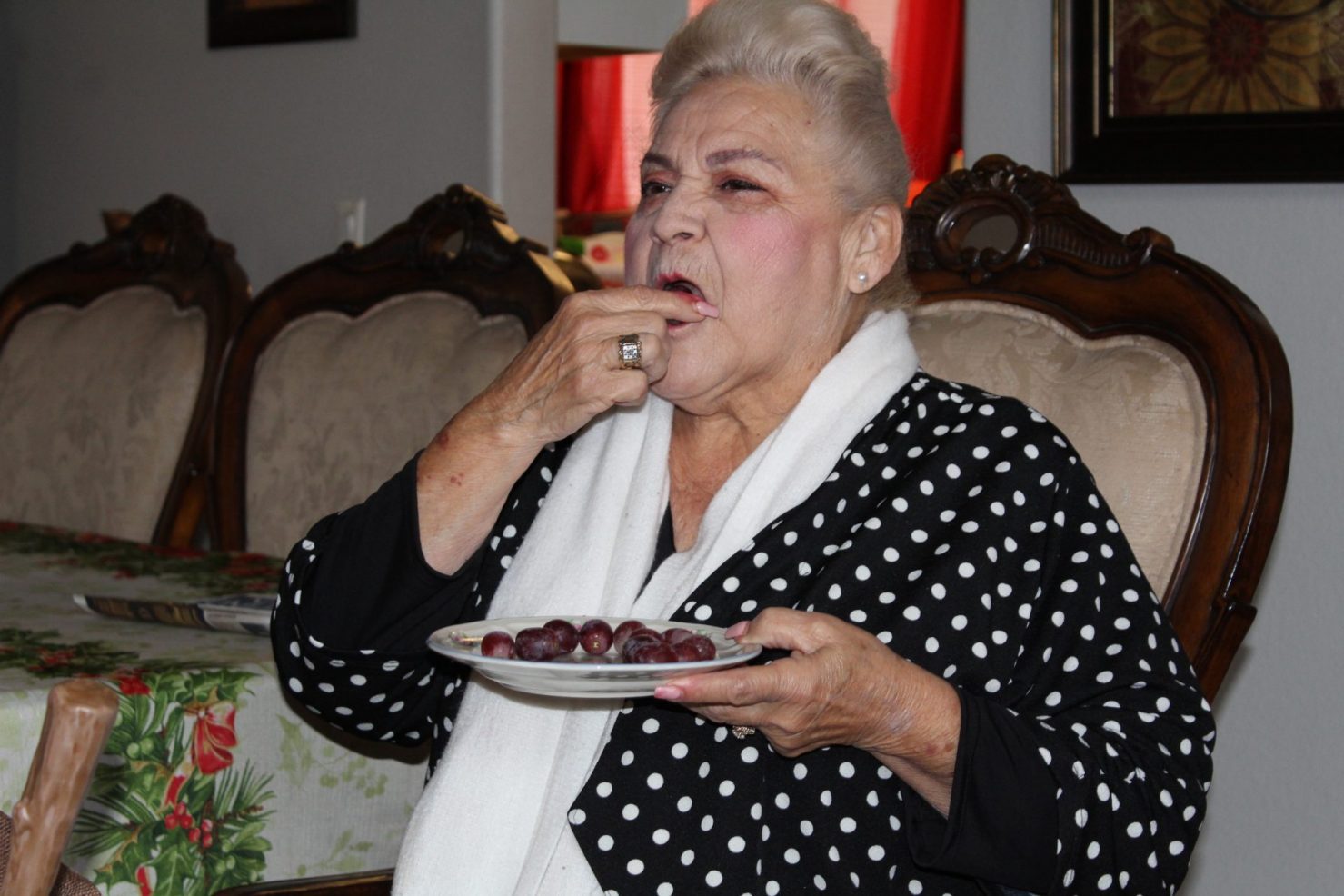 Margaret Sauza of Calexico demonstrates the eating of 12 grapes prior to the ringing in of the New Year. Each grape symbolizes good luck for each month of the next year. | KATHERINE RAMOS PHOTO
Home
Featured Stories
In Featured StoriesRegional News

CALEXICO — “Be prepared to receive the New Year.”

That was what Margaret Sauza’s grandparents would tell her, her cousins, and the rest of her family on New Year’s Eve right before midnight. The family would  stand around counting down until midnight, even their mouths were filled with 12 red grapes for luck.

She and her cousins would eat 12 grapes from a plate, one for each month of the new year, and make a wish with every juicy bite. Sauza said she remembers struggling and almost choking with her mouthful of grapes while counting down with everyone else.

One other tradition she remembers is the colored underwear, a tradition that was started in Mexico. The color worn depends on what you want for the coming year — red for love, yellow for money, white for peace, green for prosperity.

And at midnight, Sauza’s grandmother would have everyone sweep the house, sweeping out “de sal mal,” or bad luck from the house for the new year.

“New Year’s was everybody being together, the big ones and the little ones, the nieces, the aunts, that’s what I remember,” Sauza said during an interview on Tuesday, Dec. 28.

These traditions Sauza’s family does are just a few of a large list of New Year’s Eve traditions from Latin American cultures.

San Diego State University’s Dr. Ramona Perez, professor of anthropology and director of the Center for Latin American Studies, said a lot of these traditions come from the harsh times of winter, where the long cold months bring hopes for prosperity when the days get longer. The traditions are also usually tied to Catholicism, according to Perez.

The tradition involving underwear, Perez said, comes from the main colors of the Catholic Church, red, green, yellow, and white. She said the colors were coordinated with saints and would be used to represent them for the coming year.

“In some parts of Mexico, they would light candles in those colors as well. They would take them into the church to the saint for the coming year in whatever color they were focusing on,” she said during a phone interview on Dec. 28.

Perez said her own family does keep some of these traditions, including the colors, but instead of underwear it is table linens. White for peace in the new year, or green for prosperity in her father’s new job, what her mother felt they should focus on in the coming year.

Some other traditions are keeping lentils in the pockets or in small bags, which symbolizes prosperity and fending off hunger. Lentils would be gifted, left out overnight, or even eaten on New Year’s Eve and on New Year’s Day.

Along these same lines was the tradition of eating salted cod or bacalao, again a food source that represents prosperity in the New Year, according to Perez. In Guatemala there are even black tamales to be eaten, made of a darkened piloncillo, and placing pennies around the house or throwing pennies over the shoulder for prosperity.

Perez said she believes the New Year is more of one part of a customary tradition that starts with the posadas and ends on Dia de los Reyes, or the Three Kings Day, a huge part of Latin American culture.

All of these traditions are to continue the importance of being with family, Perez said.

“The start of every new year should be with family in order to ensure the continuity of the family,” Perez said. “Your family is who you want to start and end major lifecycles with, you want your family beside you.”

Which is important for Sauza as well, who celebrates usually with her children, grandchildren, and friends at her house now, continuing to carry on those traditions her grandparents instilled in her when she was a child.

“A lot of our families are across the border, so it’s not difficult to carry on our traditions,” Sauza said.

Her children kept up the traditions, but only half of her grandchildren still keep them.

Sauza will even be dropping off tamale plates on Friday, Dec. 31 at the Imperial County Sheriff’s Office and Heber substation, and the El Centro and Calexico police departments.

With much of the Imperial Valley considered ancient Kumeyaay land, the tribes have already celebrated their New Year, which usually starts on Sept. 21 and lasts until Nov. 21. Michael Connolly Miskwish of the Golden Acorn Kumeyaay said many of the traditions include bird singing, storytelling, and a marking of the day, but not everyone celebrates.

There is even a ceremony at La Rumerosa in Baja California, where a dagger of light hits a little red man in a cavern in a perfect ray and the people sing for the new year.

“Everybody has their own things that they do, but it’s pretty much like everyone else’s,” Miskwish said. “Also, a lot of our gift giving occurs during this time to other communities in need.”

Most New Year’s celebrations are done the same as other Americans, with fireworks and parties.

Around the Valley, most families will be gathering to celebrate in a more private setting, but for any social butterflies there are a few parties going on New Year’s Eve.

El Centro is the center of the New Year’s celebrations with two events going. The Vibe Event Center will be hosting a party on Dec. 31 from 7 p.m. to 2 a.m. Jan. 1. Musical performances by Milagros: a Santana Tribute band and DJ Oboe will be in charge of the dance beats for the night.

Dogwood Sports Bar will have a New Year’s Eve party as well with drink, food, and dancing. DJ Lex will be laying down the beats here. The event starts at 9:30 p.m. and attendees must have a valid ID before entering.

The Great Escape bar in Ocotillo will be hosting a day of activities including drinks with ’80s and county music. The next day on Saturday, Jan. 1, a day ride through the desert with Mike Tripes at noon will start. Camping spots will be available while spots last for any who are planning to stay the night until Monday, Jan. 3.