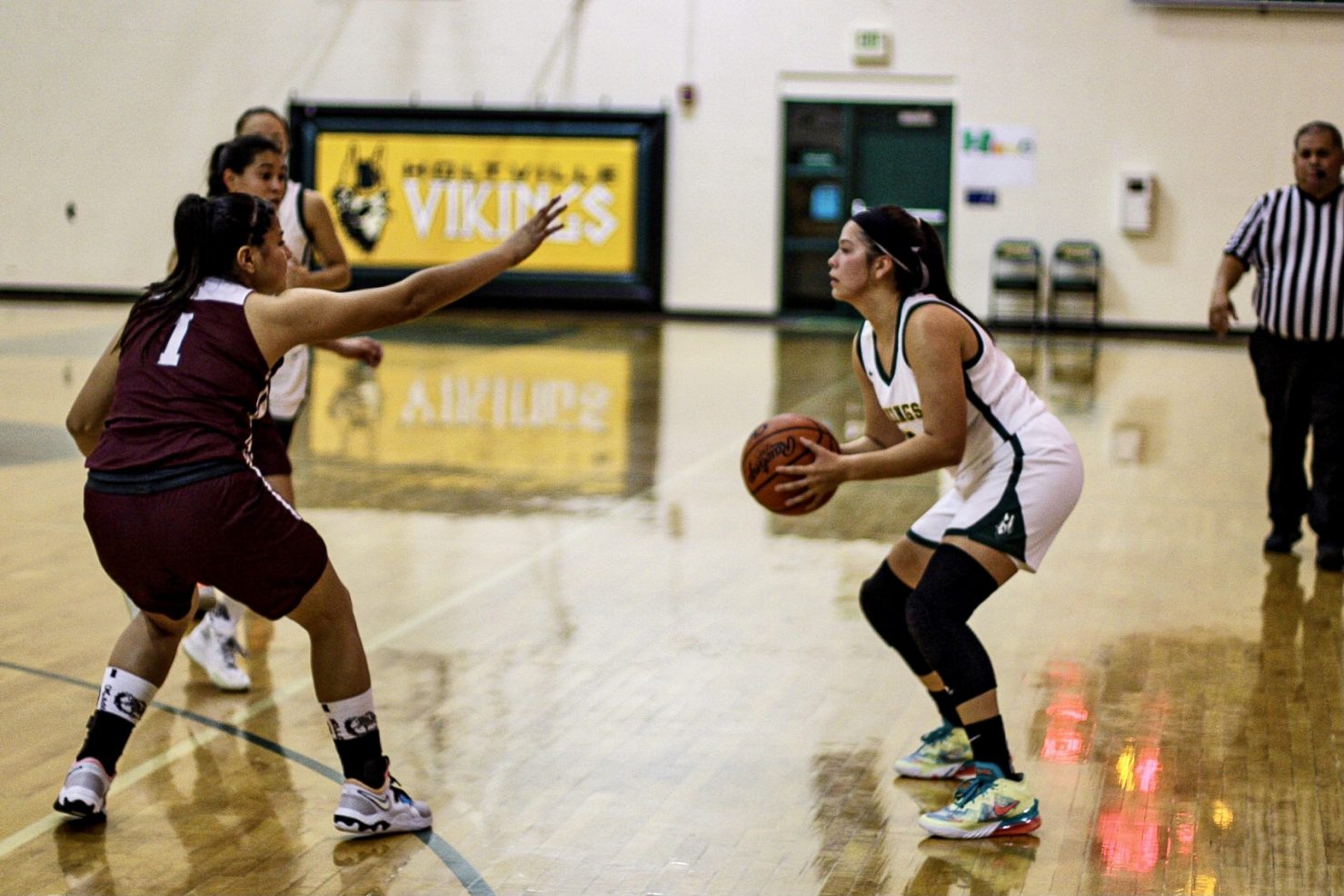 Holtville High School senior Orian Anderson looks to make a move against Calexico in a game earlier this season in Holtville. Both the Vikings and Bulldogs begin IVL play next week. | MEGAN JONES FILE PHOTO
Home
Sports
In Sports

Holtville, Imperial Expected to be Favorites in Realigned Leagues

HOLTVILLE — A plan to divide the local Imperial Valley League and Desert League by competitiveness was supposed to go into effect for the 2020-21 basketball season, but with COVID delaying the season into the spring and limiting the number of games, it was agreed to have all the local teams play in one league for 2021.

Now with a full season under way, the first attempt at competitive equality will get going with the IVL made up of the five top-ranked teams according to the CIF-San Diego Section preseason rankings, and the DL made up of the bottom four ranked teams.

In girls basketball this season, the IVL is composed of Holtville, Imperial, Calexico, Vincent Memorial Catholic and Brawley Union. The DL is composed of Central Union, Southwest, Calipatria and Palo Verde Valley of Blythe.

Let’s take a look at the IVL teams and what can be expected this season.

The Vikings (8-4 this season) won the IVL championship during the COVID-delayed 2021 season with a perfect 8-0 record. Holtville, which competes in CIF-SDS Division II, lost in the divisional quarterfinals against top-seeded Academy of Our Lady of Peace of San Diego.

The Vikings return three All-IVL players, including first-teamers junior Kamryn Walker and senior Orian Anderson. Also back is junior guard Julia Moreno, who was second-team All-IVL as a sophomore.

The Tigers (10-5 this season) lost to the Vikings last season, their first loss to an Imperial Valley team since 2014. Imperial, which competed in CIF-SDS Division I for five consecutive years, is now in Division II for the 2022 playoffs.

The Tigers are led by returning All-IVL first-teamer junior Sierra Morris’ 16 points per game. Freshman Nayeli Cardona has made an immediate impact for Imperial, putting in 10 points per game.

The Bulldogs (7-6 this season) rely heavily on senior Viviana Cuadras and her 18.3 points per game. Cuadras recently passed the 1,000-point mark for the Bulldogs and will be counted on to do the bulk of the scoring this season.

Junior Cecilia Costa is averaging 6.4 points per game this season and close to four assists and sophomores Valeria Viveros and Mia Borboa are scoring 6.6 points per contest for the Bulldogs.

Calexico, which finished fourth in the IVL in the spring, competes in CIF-SDS Division II after competing in Division III in the 2021 playoffs.

The Scots (0-9 this season) are going through a rebuilding process after graduating the majority of their starters from the 2021 spring season that saw them reach the CIF-SDS Division IV quarterfinals.

Senior Bella Gonzales was named MVP of the Desert League as a junior, but now as a senior has been dealing with injuries, competing in just two contests. Freshman Paola Longoria is making her presence felt, averaging 17 points and 13 rebounds per game.

The Scots finished in third place in the IVL during the spring season, losing only to Holtville and Imperial during the league schedule.

The Wildcats (9-4 this season) had a five-game winning streak in December, only to have it snapped by Yuma Catholic on Dec. 17, falling 49-36.