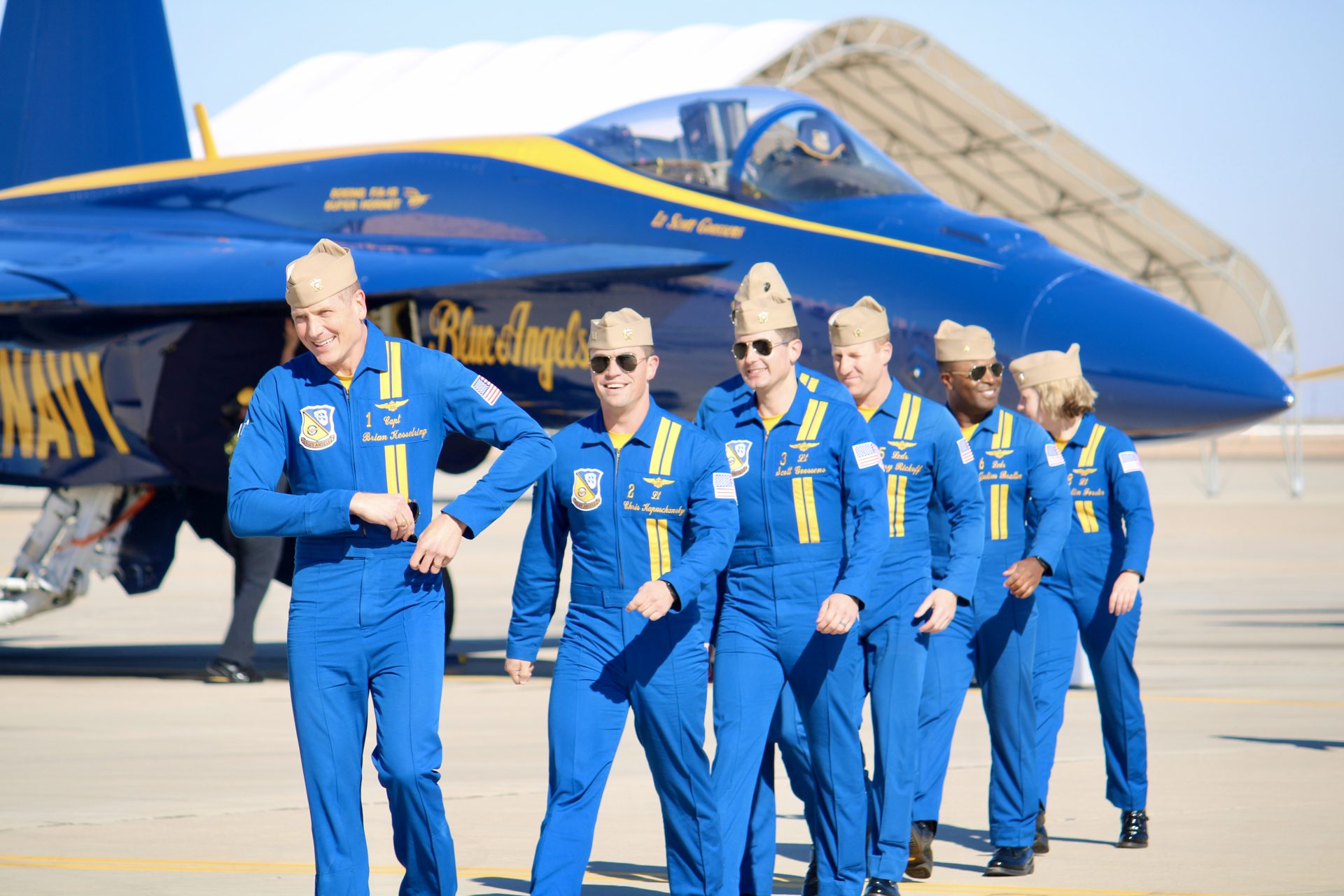 The Blue Angels pilots walk to the hangars after flying more than three and a half hours to get to Naval Air Facility El Centro on Tuesday, Jan 4, to start their 55th winter training season in the Imperial Valley. MARCIE LANDEROS PHOTO
In Featured StoriesRegional News

Despite having just flown more than three and a half hours from Pensacola, Fla., the permanent home base of the team, and performing a mid-flight refueling on the way, excitement and joy radiated from many of the pilots and flight crew as they walked off the flight line with smiles, waves, and handshakes for old friends from previous winter trainings.

“This is my second time to El Centro, but I grew up in California, so it’s nice to be home … You know, coming back to El Centro, that’s a good spot. You know, the weather is fantastic. The people, they’re fantastic, and it allows for us to get some really good training in,” said Mass Communication Specialist Bobby Baldock, who functions as the Blue Angel’s public affairs officer, in an interview after the Blue Angels pilots touched down.

Baldock spoke of the history of the Blue Angels and how 76 years ago, the chief of naval operations, Admiral Chester Nimitz, was inspired to develop the Blue Angels Naval Flight Demonstration Squadron.

“In 1946, Admiral Chester Nimitz thought to himself, ‘You know, how can I show the professionalism and the capabilities of naval aviation to the world?’” Baldock said.

The Blue Angels have flown every year since then, though for the first 23 years they held their trainings elsewhere in the United States. Kristopher Haugh, NAF El Centro’s public affairs officer, was able to pick up the story from there, explaining how when the Blue Angels winter home was being decommissioned in 1966, El Centro’s first African-American mayor, Dubois McGee, lobbied for the Blue Angels to be moved to El Centro.

“My understanding of the story is that he went to go lobby (the federal government), to bring them out here as their winter training home because of the great flying conditions and the support that he knew the community to give,” Haugh said.

El Centro’s trailblazing mayor was successful, and for the last 55 years, the Blue Angels have been stationed at NAF El Centro from January to March. Currently, the squad is scheduled to perform 120 training flights as part of its winter training and participate in NAF El Centro’s second annual Festival of Flight, tentatively scheduled for March 12.

“Our second annual Festival of Flight is currently scheduled to be an in-person event with many live military flight demonstration team performances, a car show, live bands, and fireworks,” said Capt. William Perkins, NAF El Centro’s commanding officer, in a press release. “However, we are closely monitoring the impact the latest COVID surge is having and will make any necessary adjustments to our planned festival to protect and safeguard our workforce, families and community as the situation further develops.”

Once the jets came to a full stop, the Blue Angels pilots stayed with their jets, answering questions about their aircrafts and the team. Pilot No. 5 and lead solo Lt. Cmdr. Cary Rickoff stood just below where his name was painted in bright yellow letters against the shiny blue body of his Boeing F/A-18 Super Hornet as he explained that the Blue Angels jets are ready for action.

“This is the F/A-18 Super Hornet, we get the one- and two-seat models … It’s got two General Electric engines, and a lot of horsepower. As you see him right now is basically exactly how they would go out in the fleet. Obviously painted a little bit brighter blue here than they normally would, but this is the same jet they’re flying on and off aircraft carriers right now out in the Pacific and in the Arabian Gulf,” Rickoff said.

Rickoff explained as he walked around the jet that the most notable modification made to the jet was the removal of the gun in the nose of the jet, which was then replaced with a smoke tank. This tank holds paraffin oil, which is then pumped down a tube into the exhaust, where it burns the distinctive white smoke produced for airshows.

Rickoff is an Atlanta native and holds a bachler’s degree in biology from Duke University in North Carolina, though he laughed as he admitted he hasn’t used it very much in his 13-year career in the Navy. Rickoff shared during the interview that it wasn’t his hometown, but his father’s that inspired him to become a Blue Angels pilot.

“My father was born raised in Pensacola, Florida, so we grew up coming to see the Blue Angels in the Naval Aviation Museum (in Pensacola), all throughout my childhood. And I guess one day it just stuck. So, I enjoyed flying and kept going with that. Then I found my way here,” he said.

Rickoff expressed a fondness for NAF El Centro and Imperial County, after spending the last four years as a part of the Blue Angels squadron, and a handful of visits outside of his Blue Angels career.

“This my fourth winter training with the team, and I’ve been here multiple times in my fleet time here … It’s great. The weather is perfect for us. As you can see here, sunny, no clouds in the sky. Perfect temperature, so that allows us to get those 120 training flights we need out here in that short amount of time. It’s invaluable to our shows to come out here,” he said, adding he was also really looking forward to a burrito from Seeley Market.