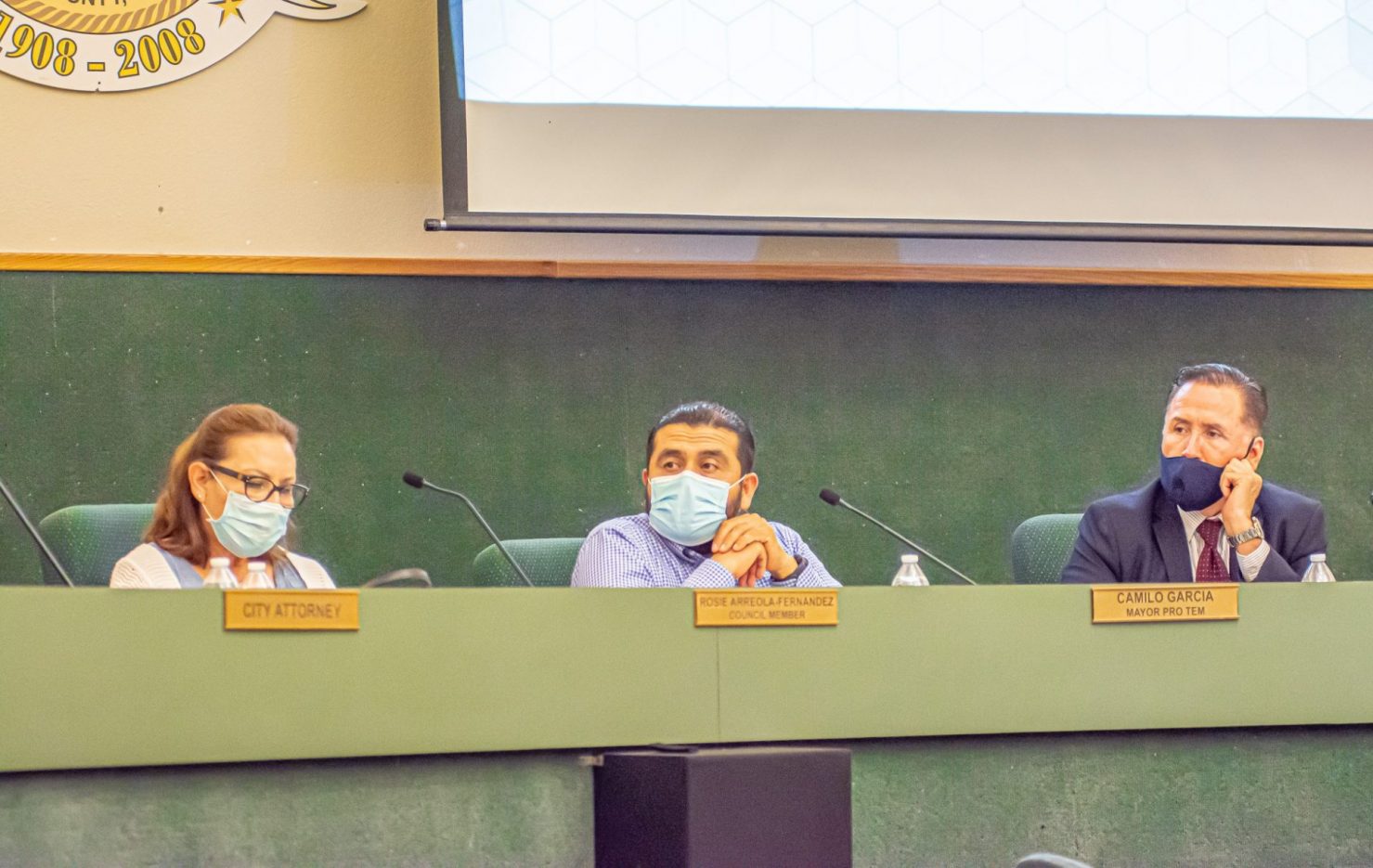 CALEXICO — Direction was approved to have legal counsel create a resolution classifying Calexico City Council members as essential workers, thereby eligible for the $7,000 payment already coming to city workers, passed on a split vote, with Mayor Pro Tem Camilo Garcia vocal in his rejection of the measure.

“I think now we are putting ourselves in the front of the line,” said.

A resolution passed on Nov. 3 granting the payments to Calexico’s full- and part-time workers, amounted more than $1 million. The addition of the five council members, as well as former council members who served during the COVID-19 pandemic (Bill Hodge, Morris Reisin, and Lewis Pacheco), would be $56,000.

The council adopted a resolution in August designating all city employees as essential workers, which made them eligible for the ARPA payments.

Mayor Moreno, who put the item on agenda, insisted that according to the law the City Council counts as having done essential work during the pandemic, both current and former members. Moreno said ARPA funds will still be used based on a list the City is putting together right now that will be voted on based on priority.

Moreno added that anyone who did not want to take the compensation did not have to.

In its totality, what was approved was the creation on a resolution “designating eligible workers to receive premium pay to include current City Council members, former City Council members, former city employees and deceased employees who performed essential work during the COVID-19 pandemic (March 2020 – June 2021) for an amount up to $7,000 based on hours worked; and receipt of any premium pay is voluntary,” City Manager Miguel Figueroa clarified in an email on Wednesday, Jan. 5.

A policymaker taking the ARPA funding is not unprecedented locally. Members of the Imperial County Board of Supervisors received $1,000 each along with county workers, newly installed board chair Jesus Escobar stated in a text message.

Conversely, the El Centro City Council did not take any ARPA payments when they voted several weeks ago to grant $3,000 to full-time city workers and $1,500 to part-timers, Mayor Tomas Oliva said in a brief interview.

While council members Romo and Ureña both supported directing counsel to create the resolution, they asked that there be more community involvement and consideration.

Ureña said the people have directly told him to not to vote to create the resolution yet and did suggest the council wait until July, when the funds absolutely need to be used. He suggested the council give Calexico City Manager Figueroa a month to come up with a list of needs in Calexico before putting the issue to full vote.

Moreno disagreed with Ureña, saying that a month is too long of a wait and employees need to be paid now.

Ureña also brought up the Fire Department’s needs, noting that there have been problems with hiring to replace seven open positions brought up by Calexico Firefighter Joshua Paddock, who spoke during public comments.

Romo suggested workshops to encourage public involvement to talk about other programs that could use the ARPA funds.

Mayor Pro Tem Garcia asked that Figueroa come back with a potential spending plan for the remainder of ARPA funding for next regular council meeting on Jan. 18. He added that other cities in the Valley have already had plans submitted by their city managers to use the funds.

Daniela Flores with the Imperial Valley Justice and Equity Coalition called for the council to hold off on making a decision. Flores said the coalition has already begun to suggest how the remaining ARPA funds could be used for the community’s needs, including services for higher-risk essential workers, downtown service centers and investments in cooling stations, outreach capacity, access to assistance programs, psychiatric emergency services, a housing first pilot program, and more.

“The real question is why grocery workers, farmworkers, warehouse workers, and teachers who have been doing in-person work and have lost their lives at higher rates do not deserve a cent of funding that was designed for them,” Flores said in her comments to the council. “We have not heard of plans that allocate funds to them.”

Luis Flores, a co-founder along with his sister, Daniela, of the Justice and Equity Coalition, did not mince words about what he thought of the council members becoming eligible for the $7,000.

“They’re … not doing the person-to-person contact that should be at the core of the definition of essential worker. To me, I mean, it would be laughable if it wasn’t so insulting to people that have been having to go through the sort of mental and physical risk of doing essential work,” Luis Flores said on Monday, Jan. 3. “It’s really disappointing and it’s kind of just, it’s unbelievable.”

Ureña is counted as a founding member of the Imperial Valley Justice and Equity Coalition.

During a number of comments on the issue, various community members spoke, lobbying for their inclusion in the resolution.

Bill Hodge, former two-time City Council member, asserted that the council does qualify for the monies that are being made available, adding that a resolution will not only give them a compensation but also right a wrong of leaving former council members out of the prior resolution.

He said the beginning of the pandemic was challenging for everyone and all the work he and other council members did to have their meetings at the time, qualified him and others as essential workers.

“Include the former council members, who worked our butts off in this. I implore you to please consider our contributions, our hard work of that year towards COVID-19 and public safety and public information,” Hodge said.

Two written comments came from former employees of the city, Ryan McKegan, a retired firefighter who served as liaison for the city of Calexico to the Imperial County Emergency Operations Center as an essential worker, and Monica Silva, asking if they are eligible for the compensation the other city members received.

(This story was updated on Thursday, Jan. 6, with clarification from City Manager Miguel Figueroa that a resolution was not passed but direction to legal council approved to create a resolution.)

Next
Calexico Chief Gerardo Comes Out of Retirement