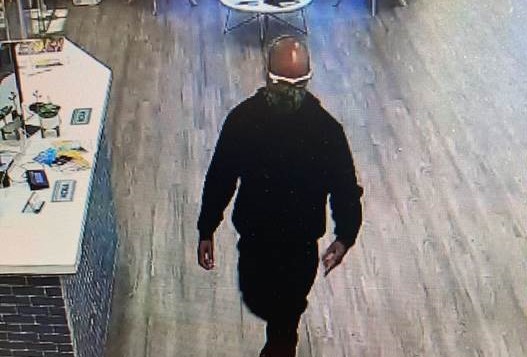 The FBI released a photo of the man they believe robbed the Holtville branch of Sun Community Federal Credit Union on Monday, Jan. 3. He has been identified by FBI as Asim Shakir Daniels, 36, of Brawley. | COURTESY OF THE FBI
Home
Local News
In Local NewsPublic Safety

SAN DIEGO — A 36-year-old Brawley man suspected of having robbed the Sun Community Federal Credit Union branch in Holtville earlier this week and a La Mesa bank the next day was previously convicted of such acts, according to court documents.

Asim Shakir Daniels was in the San Diego Central Jail on Wednesday, Jan. 5, awaiting arraignment on Thursday afternoon, Jan. 6, for the San Diego County crime, according to various media reports.

A criminal complaint filed in U.S. District Court in San Diego on Wednesday charges Daniels with the La Mesa crime but only connects him to the Holtville crime.

“Mr. Daniels’ potential involvement in any other crimes is part of our ongoing investigation,” according to a statement from the FBI’s San Diego office sent to this newspaper Wednesday evening. “At this time, no one has been charged with Monday’s robbery in Holtville.”

Yet in the criminal complaint, the FBI clearly indicates Daniels’ involvement.

“Based on this individual’s appearance, clothing, and method of operation, I believe the bank robber at Sun Community Federal Credit Union (in Holtville) to be Daniels,” according to FBI Agent Jesse Chappell in a probable cause statement included in the federal complaint.

If indeed the same man, Daniels pleaded guilty in United States District Court Southern District of California on Nov. 1, 2012, to bank robbery, assault with a dangerous weapon while committing that act, and a brandishing firearm. It appears Daniels was sentenced to more than 11 years in prison with several years of supervised release, according to documents.

More details emerged about the Sun Community robbery, according to Chappell’s statement.

The Holtville robbery, which was known to have occurred around 11 a.m. Monday, Jan. 3, saw Daniels allegedly walk into Sun Community and tell a teller he was “robbing the place,” Chappell states, as Daniels reportedly pointed to the vault and told the employee to “give me that.” Unable to open the vault, tellers cleaned out the money from their drawers and Daniels allegedly left with $20,545.

On Tuesday, Jan. 4, Daniels was arrested by La Mesa police officers shortly after a brief foot pursuit following the heist there, according to a City News Service report in Times of San Diego.

Daniels allegedly pretended to have a concealed gun while demanding money from several tellers at the Bank of the West’s La Mesa branch about 10 a.m., according to the La Mesa Police Department, similar to the fashion how he allegedly robbed the Holtville location on Monday, Jan. 3.

Although it wasn’t known whether Daniels claimed to have a firearm in the Sun Community heist, the FBI on Monday night stated in a press release the suspect demanded money from the teller around 11 a.m. and left the location at 100 E. 5th St. on foot.

The Sun Community robbery was announced on credit union’s Facebook page not long after the crime was committed, with the post stating: “Thankfully, no one was physically harmed during this incident. The police and FBI have been notified and the proper steps are being taken.”

In the La Mesa robbery, after the suspect made off with less than $3,000 in cash, the robber walked off toward the Grossmont Center mall, police reported.

With the help of witnesses, patrol officers found Daniels near a Target store at the shopping center, chased him down and took him into custody, Times of San Diego reported.

“The money taken during the robbery was recovered,” a La Mesa police official stated in a press release.

Daniels was booked into San Diego Central Jail, where he was being held on $100,000 bail pending arraignment, which was scheduled for Thursday afternoon, Jan. 6.

A jail photo of Daniels was not available on Wednesday, Jan. 5. A spokesperson for the San Diego County Sheriff’s Office said it is standard procedure not to release mug shots to the media.