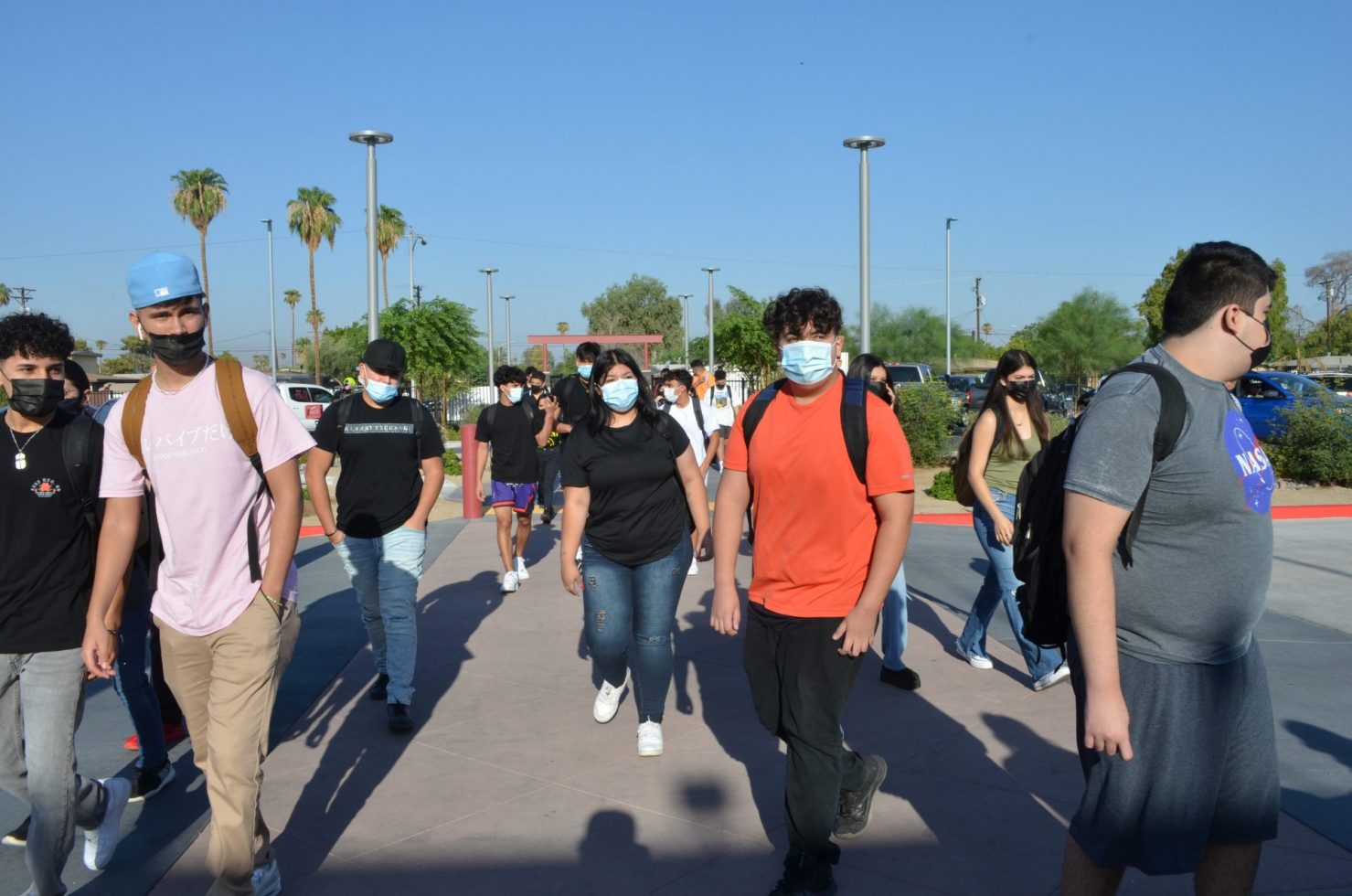 Dozens of Calexico High students made their way onto campus the morning of Aug. 23 for the first day of school wearing masks. COVID numbers are at their highest since the school year started, and all school districts in the Imperial Valley are experiencing a surge in student and staff absences. | JULIO MORALES PHOTO
Home
COVID-19
In COVID-19EducationFeatured StoriesRegional News

CALEXICO — Between a rise in COVID-related absences in local schools, a surge in cases locally, and the announcement of the first case of the highly contagious omicron variant, schools throughout Imperial County are struggling to re-evaluate and re-adjust their procedures to keep students and staff safe.

“Before the winter break, our cases increased slightly due to the Thanksgiving break. Our first day back to school was Tuesday, Jan. 4, and since then we have seen an increase in positive COVID cases resulting from off-campus exposures,” said Carlos Gonzales, Calexico Unified School District superintendent in an email on Thursday, Jan 6.

Gonzales explained that while the school has been impacted by the absences, in-person learning continues, as will most extracurricular activities, including sports, though these activities are being affected by cancelations from other districts.

Calexico Unified is working closely with the Imperial County Public Health Department, according to Gonzales, by following guidelines set forth by them, along with the Occupational Safety and Health Administration’s guideline for staff safety. The district’s staff are also actively reaching out to parents who report students absent for illnesses to establish whether they are COVID-related.

“The Health Department solely determines any potential school closure. At this point, we will continue to provide in-school instruction,” Gonzales stated.

As far as testing, a Calexico Unified School District spokesperson on Tuesday, Jan. 11 stated there are limited testing sites available for staff, and the district is in the process of “organizing the distribution of COVID home tests to students,” the spokesperson stated in a text message.

San Diego State University-Imperial Valley campus in Calexico has already made that move, per a decision on Wednesday, Jan. 5 from SDSU’s main campus. The university is returning to distance learning temporarily, with minor exceptions, from Jan. 19 to Feb. 4, at all campuses. Students are expected to be able to return to in-person education on Feb. 7.

The decision was not a response to Imperial County’s COVID statistics but a preemptive move over projections from the County of San Diego Health and Human Services Agency, which “anticipates a post-holiday spike with the omicron variant in mid-January,” according to a press release from SDSU.

Reported high numbers of student and staff absences upon the return winter break is being seen as COVID numbers continue to rise in the county. As of Jan. 6, Imperial County Public Health reported 1,364 active cases, close to doubling its Dec. 29 report of 729 active cases. The county is also experiencing a 22.3 percent positivity rate, which is a sharp 4.1 percent increase from last week’s reported 16.2 percent.

Both Central Union High School District and El Centro Elementary School District are reporting higher-than-normal absence rates, with CUHSD having a 94 percent attendance rate, according to a Jan. 6 email from Superintendent Ward Andrus, while ECESD having an 84 percent attendance rating according to an email from ECESD Superintendent Jon LeDoux. Both stated that they believed many of them were COVID-related.

Andrus and LeDoux expressed that both districts are struggling to keep enough staff to continue all of the district’s educational services. LeDoux and Andrus stated they are actively struggling to recruit more staff.

“The (El Centro Elementary) District is struggling with staffing, as are most districts in California … we are actively recruiting and attempting to hire substitutes for just about every position in the District,” LeDoux wrote. “We actually have a general education teacher position that has been open for more than a month without successfully finding a qualified applicant.”

The district also announced that it was incorporating the state’s new quarantine and isolation guidelines for employees, which should allow many of the district’s employees to return to work sooner than they were previously allowed, LeDoux said in a Jan. 11 email.

Lastly, ECESD is offering a second COVID-19 test kit to each child whose parents request one. Each kit provides two tests and the district is requesting that parents administer one test on Monday, Jan. 17, the Martin Luther King Jr. holiday, so that can the district can hopefully start the week with fewer cases on campus.

“The second test in the kit may be used at the parent’s discretion in the event that a child exhibits any worrying symptoms,” Le Doux stated.

At this stage, neither school is planning to make any large changes to protocol, since both are already following recommended guidelines. Like in Calexico, CUHSD sports will continue, with Andrus clearly stating that indoor sports athletes and staff are tested weekly. Andrus also explained that CUHSD will continue to do in-person learning until schools are officially shutdown, due to the cost of moving back to virtual learning.

“At this point we are not considering Distance Learning. There is not a funding mechanism by the state of California to move back to that model. In seeing schools each day and being in classroom each day this week, the classes and teaching is normal.  Students tell me how glad they are to be at school, with their peers and teachers,” Andrus stated in his email.

McCabe Union School District could not be reached for comment.

Holtville Union School District’s superintendent couldn’t be reached for comment on how schools throughout Holtville are handling the surge, but Holtville High School Principal Anthony Arevalo stated in a brief interview on Friday, Jan. 7 that the school intends to continue without any changes to its protocol.

Arevalo didn’t say anything about staff or student absences but did say certain sports are having their athletes and staff tested weekly. Details of which sports, or further information on how the school is adapting during the pandemic would have to wait until Monday, Jan. 10, Arevalo said, adding that the athletic director was away at the time of the interview.

Differing from the other schools, Imperial Unified Superintendent Bryan Thomason stated clearly in an email on Jan. 6 that they were seeing increased absences, but the school is not categorizing what illness students and staff have.

Thomason further disclosed on Tuesday, Jan. 11 that the district is limiting as many face-to-face meetings with staff and students as it can for the next two weeks.

“We are still conducting contact tracing and following all the protocols to limit the spread of COVID,” he said in a Jan. 11 email.

Both Brawley schools established that their absences were believed to be related to COVID in emails from BUHSD Superintendent Simon Canalez and BESD Superintendent Richard Rundhaug on Jan. 6 and Jan. 7, respectively.

“We are definitely seeing an uptick of all around absences related to the current surge of COVID locally. The majority of student and staff absences are related to either a positive case or an exposure,” Canalez stated on Jan. 6.

Currently, Imperial and BUHSD are not making any plans for adjustments in response to the COVID surge, though Rundhaug stated that Brawley Elementary schools and the district itself will provide service to the public remotely for the time being, to help reduce exposures from the public.

The Brawley Elementary schools also resumed its use of an outdoor mailbox system for exchanging documents with the public, Rundhaug stated on Jan. 11.

Canalez stated that Brawley Union has “appropriate staff coverage for any absences at this point in time. We anticipate business as usual for the remainder of the school year related to in-person instruction, sports programs, and extracurricular activities.”

Imperial Valley College will be adjusting how long their staff are on campus to reduce exposure but will not cut any of the services being currently offered, according to a Jan. 6 email from spokesperson Elizabeth Espinoza.

Although IVC would not be forced to go back to distance learning, Espinoza stated, should a larger-sized classroom become available during the semester, professors can work with the administration to move classroom to provide further social distancing.

(This story was updated on Wednesday, Jan. 12 with updated information for some school districts.)

Next
Imperial School Board Appoints David Ross to Vacancy