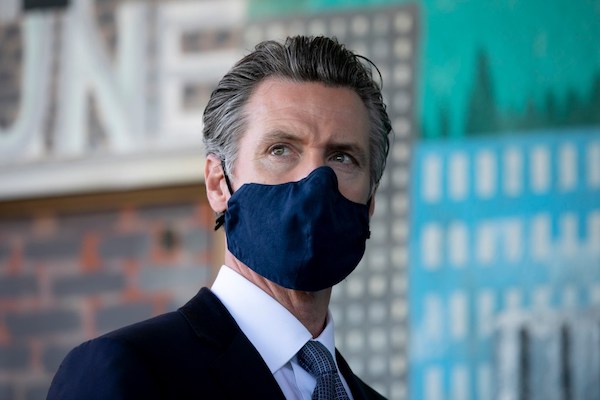 Gov. Gavin Newsom announces a new requirement for all school teachers and employees to show proof of vaccination or to undergo weekly COVID-19 testing at a press conference held at Carl B. Munck Elementary School in Oakland on Aug. 11, 2021. Photo by Anne Wernikoff, CalMatters
Home
California
In California

CalMatters is dedicated to explaining how state government impacts our lives. Your support helps us produce journalism that makes a difference. Donate now.

Today, Gov. Gavin Newsom is set to unveil his budget proposal for the fiscal year starting in July — but, in a sign that California is scrambling to keep up with the omicron variant, he wants state lawmakers to immediately approve $1.4 billion in emergency COVID funding.

The emergency request is part of a $2.7 billion coronavirus response package that Newsom’s administration previewed Saturday. It also calls for legislation to revive supplemental paid sick leave related to COVID-19, potentially modeled on a program that expired last year against the wishes of organized labor.

Here’s a closer look at the $2.7 billion proposal, which the administration expects to largely be reimbursed by the federal government:

The package provides the latest glimpse into Newsom’s priorities for spending what analysts estimate could be a $31 billion surplus. The governor is also expected to propose spending billions of additional dollars on drought prevention, wildfire suppression and rural workforce development programs, the Sacramento Bee reported Sunday night. And he’s hinted at plans to funnel money into stimulus checks, crime-fighting efforts, dyslexia screenings and early education, cleaning homeless encampments and infrastructure.

But three key actions his administration took on Friday and over the weekend suggest that COVID will likely dominate financial and political debates at the Capitol — even as Republican lawmakers begged Newsom to declare a special legislative session devoted to homelessness.

California has administered 66,277,054 vaccine doses, and 71.7% of eligible Californians are fully vaccinated.

California’s most comprehensive picture to date of the pandemic’s impact on K-12 education emerged Friday, when the state Department of Education released student performance data for the 2020-21 school year, which many kids spent almost entirely in distance learning.CalMatters education reporter Joe Hong noted these key takeaways:

For many education leaders, the data reinforced the importance of in-person learning — just as some schools started shutting down again. Hayward Unified School District said Friday that it will hold classes remotely for a week starting today amid a surge in omicron cases, while 12 Oakland schools closed Friday when 500 teachers held a sickout to call for enhanced safety measures. On Saturday, the California Teachers Association reiterated its commitment to in-person learning while also calling on the state to increase protections and restore COVID supplemental paid sick leave.

If you like action sports, try keeping up with the California Legislature during an election year spiced up by newly redrawn districts and looming term limits. The high-octane mix has resulted in a degree of churn not seen in at least seven years, with 14 assemblymembers and state senators so far calling it quits or deciding not to seek reelection in November — on top of seven senators hitting their term limits and an assemblymember hoping to jump to the state Senate, CalMatters’ Ben Christopher reports. The frenzied game of musical chairs — which is far from over — will likely alter the policies coming out of Sacramento: After the November election, the 120-member Legislature will usher in at least 21 new lawmakers. But the uncertainty caused by so many moving parts could affect legislators’ decisions even before then, said Democratic Assemblymember Patrick O’Donnell of Long Beach, who announced last week he won’t seek reelection.

3. Will CA shake up the fast food industry?

The turnover could also affect organized labor, which lost its biggest legislative ally last week when Democratic Assemblymember Lorena Gonzalez of San Diego resigned to take over the California Labor Federation. But a controversial bill Gonzalez introduced last year — which narrowly failed to pass the state Assembly — is expected to be revived this year. The proposal would overhaul the fast-food industry by establishing a state-appointed council to set industry-wide standards for wages and work conditions — and hold corporate franchisors, not just local franchise owners, responsible for compliance, Jackie Botts and Jesse Bedayn report for CalMatters’ California Divide project. Yet Gonzalez herself says that an employee-led, worksite-by-worksite approach would be preferable to the state government getting involved in private negotiations.

California education issues to watch in 2022 — and predictions of what will happen. // EdSource

Whatmatters by Emily Hoeven first appeared on CalMatters and is made available as part of the CalMatters Network.