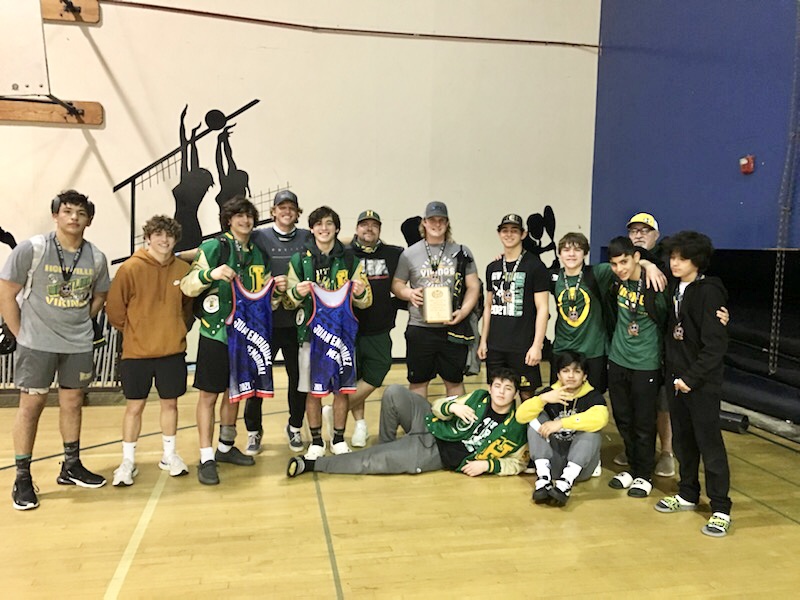 The Holtville High School wrestling team had nine wrestlers finish in the top-eight and finished third out of 40 teams at the Juan Enriquez Memorial Wrestling Tournament at John Glenn High School in Norwalk on Saturday, Jan. 8. | PHOTO COURTESY OF HOLTVILLE WRESTLING
Home
Sports
In Sports

NORWALK — The Holtville High School wrestling team had nine grapplers place in the top-eight and walked away with a third-place team trophy at the Juan Enriquez Memorial Tournament here on Saturday, Jan. 8.

“Overall I was very pleased with the way the guys wrestled,” said C.J. Johnston, Holtville’s head wrestling coach. “Kids from the Southern Section are scrappy and they will come after you for the full six minutes.”

Holtville was the only school from the San Diego Section competing at the event.

“Smitty got better each match. I was very happy with his performance,” Johnston said. “He went out there and beat the No. 1 seed and some coaches couldn’t believe when I said he was just a 14-year-old freshman.”

“We had some guys who didn’t look so good in our dual meet against Imperial then dropped down a weight and looked a lot better at the tournament,” Johnston said. “They looked a lot stronger.”

Holtville defeated Imperial 57-10 in an IVL dual meet on Wednesday, Jan. 5, the first dual meet for the Vikings in almost two years.

The Vikings are scheduled to travel to Brawley Union High for a 6 p.m. dual meet with the Wildcats on Wednesday, Jan. 12. They will then travel to Temecula on Friday, Jan. 14, and Saturday, Jan. 15, for the Battle for the Belts Tournament.