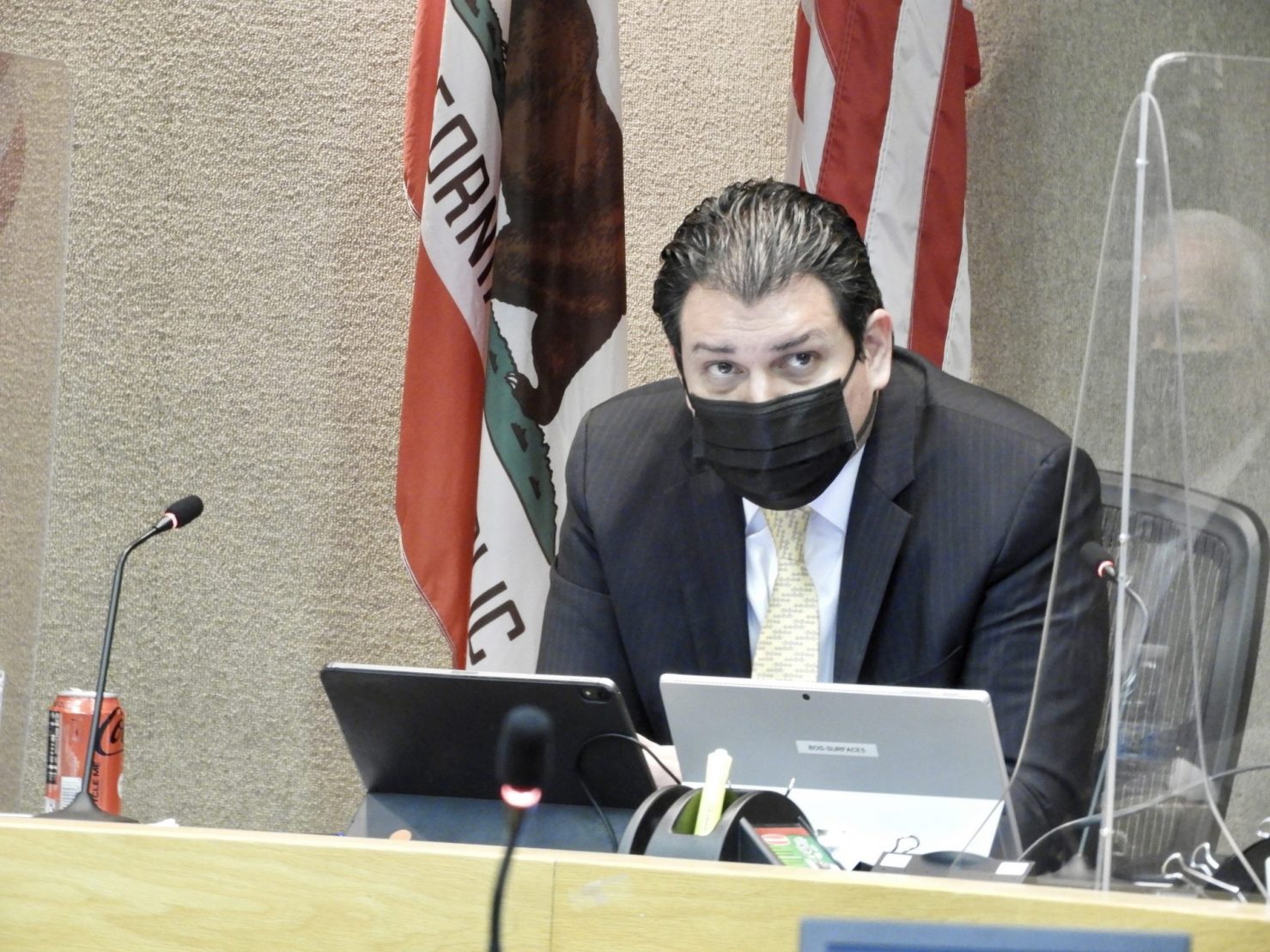 Supervisor Jesus Escobar is Met with Resistance From Fellow Supervisors

EL CENTRO — The Imperial County Board of Supervisors’ return to virtual meetings amid the latest COVID surge was marked with tension and disagreement as District 1 Supervisor and board Chair Jesus Escobar’s bid to pass a resolution declaring “health misinformation” as a public health crisis failed.

The resolution received significant pushback from Supervisors Ryan Kelley and Michael Kelley during the discussion.

Ryan Kelley revealed that the resolution started out as a response to the city of Imperial’s resolution on Jan. 5 opposing all pandemic-related mandates and the refusal to enforce them. He then questioned whether the resolution had morphed into a response to a presentation on early treatment protocols by two local physicians a few weeks ago.

Escobar opened the discussion on the resolution during the Tuesday, Jan. 11 meeting in which all members participated via Zoom and the board chambers were closed to the public.

“Right now, we are struggling. In many senses. We have higher case rates, we have, you know, higher hospitalizations. Our hospitals are stressed, max capacity or over capacity,” she said. “Our healthcare personnel is tired … I can say that not only has there been an overabundance of misinformation, it has escalated for many of us and has included threats.”

In a follow up interview, Angulo clarified her statement on threats, saying she was referring to her colleagues and other health professionals throughout the state of California, not specifically in Imperial County. She added that she could only speak for herself in that regard, and shared that while she has been in what she described as “uncomfortable” situations, she has been able to manage all of them.

Even with Angulo’s emotional plea, one glaring issue stuck out to District 3 Supervisor Michael Kelley — the lack of direction of who would provide guidance to defining “misinformation.”

Angulo responded quickly, explaining that medical experts, federal, state, and local public health groups, along with community groups like Imperial County’s ad hoc COVID committee, which she said has been one the guiding resources since the beginning of the pandemic, though nowhere specifically are these groups listed in the resolution presented.

District 4 Supervisor Ryan Kelley also found issue with the resolution, saying that the presentation seemed to be aimed at a specific presentation, referencing the presentation to the county board on Dec. 21 where Drs. George Fareed and Brian Tyson spoke on their treatment protocols, some of which advocate the use of therapeutics not presently allowed by the U.S. Food and Drug Administration for use in COVID treatment.

Angulo denied these assertions, maintaining that the resolution was not aimed at any one group or event, but a more prevalent problem.

Ryan Kelley further questioned the resolution, claiming that he had seen a draft version that was a response to the city of Imperial’s move on Jan. 5 to not enforce any local, state, or federal mandates related to COVID, but since the original drafting the resolution had changed focus.

“I saw a draft that was produced last week, there was a response to the city (of Imperial). And now on the agenda is a misleading health information resolution. I’m trying to find out what happened,” he said with frustration.

“This is not misleading, Ryan. I feel firmly about what is presented to the board. I feel it’s something that we need to band together as a collective group to be the leaders that we were elected to be and give the community of Imperial County, the scientifically proven information that is out there,” Escobar answered.

Escobar and Ryan Kelley debated back and forth for a moment about supporting the county Public Health Department, ultimately agreeing that they both put a high value on ICDPH and the work they do, but with Kelley adding that he did not believe that putting energies into stopping misinformation was an effective use of county resources.

“I don’t know if we want to create a group reviewing what is misleading and what is not during a time when we do have actual numbers increasing and impacts in the county … I am, I’m just giving you my perspective and sharing my point of view, as I feel like we have a lot of things in front of us at this very moment, and this might not be the right thing to focus on during these trying times,” Ryan Kelley said.

District 5 Supervisor Ray Castillo helped bring the conversation to its resolution by supporting Michael Kelley and Ryan Kelley, calling for the resolution to be reworded to not vilify patients’ personal choices and to allow healthcare providers the ability to find possible treatments.

“I agree with a couple of my colleagues here … I think we need to go back and really take a hard look at this. And maybe redo this as well. … If anything, I’d like to see this resolution reworded, maybe carried over to our next meeting,” Castillo said.

That was not meant to be, however, as Escobar’s call for a motion to vote was met with silence. Escobar responded by placing the motion himself, but with no one to second it, the resolution met its end.

“This motion dies without a second. Thank you,” Escobar said.

Silent among the supervisors was District 2 Supervisor Luis Plancarte, who at no point spoke during this discussion.

This political drama unfolded in front of a grim backdrop, preceded by an update on COVID conditions in the county, where Angulo shared that there were now 810 deaths and a positivity rate that had risen to 26.5 precent. She reported outbreaks at 16 different workplaces, with another seven locations under investigation, and 2,663 active cases.

Initially Imperial city officials chose not to respond directly to Ryan Kelley’s assertion that the resolution was originally in response the council’s Jan. 5 resolution. However, on Tuesday afternoon, Imperial Assistant City Manager Alexis Brown provided a statement about the county’s rejection of the misinformation resolution.

“We appreciate the board’s recognition that personal choice has a place in the discussion,” Brown said on behalf of the city of Imperial.

Previous
Still No Charges in Holtville Heist for Brawley Man