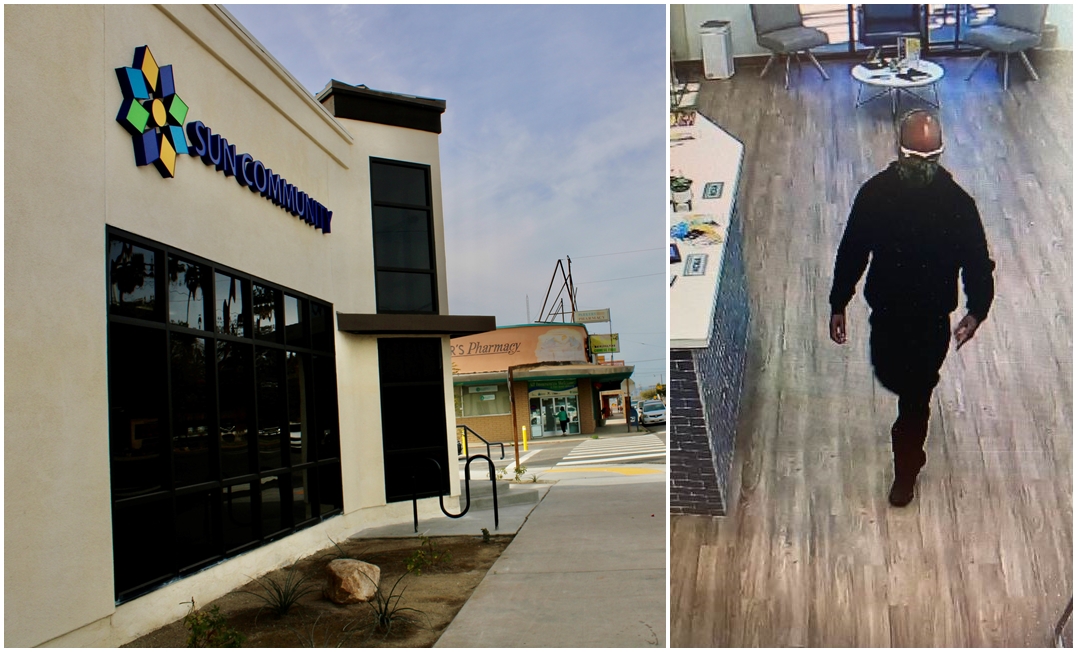 A surveillance camera still (right) of a man believed to be Asim Shakir Daniels of Brawley was released by the FBI shortly after the Jan. 3 robbery of the Sun Community Federal Credit Union branch in Holtville. | STAFF AND COURTESY IMAGES
Home
Public Safety
In Public SafetyRegional News

Asim Shakir Daniels, 36, Who Has Prior Bank Robbery Convictions, Only Faces Charges for La Mesa Crime So Far

SAN DIEGO — A Brawley man and convicted bank robber accused of making off with more than $20,000 from the Sun Community Federal Credit Union branch in Holtville on Jan. 3 still has not been charged with the crime, even as he moves through the federal courts on a similar crime he is alleged to have committed just one day later.

On Tuesday, Jan. 11, 36-year-old Asim Shakir Daniels went before federal Magistrate Judge Michael S. Berg on a detention hearing for charges he faces in the Jan. 4 robbery of a Bank of the West branch in La Mesa. That hearing was continued until Jan. 18, the same day Daniels is scheduled to have a preliminary hearing. He was arrested for the La Mesa crime on Jan. 4 not far from the bank and later arraigned in U.S. District Court in San Diego on Jan. 5.

Daniels was tied to the Holtville crime by FBI Agent Jesse Chappell in a probable cause statement included in the federal complaint charging the Brawley man with the San Diego County robbery filed with the courts on Jan. 5.

Yet since then, there has been little public movement on the effort to charge Daniels with the Sun Community robbery and a spokesperson with U.S. Attorney’s Office has provided no insight into what is happening.

Meanwhile, outside the Sun Community branch in Holtville on Wednesday, Jan. 12, at least one credit union member would like to know what’s going on.

“I don’t understand why they haven’t pressed charges against the guy who robbed this place. He’s been arrested for a different bank robbery, and they have him on film. Don’t we deserve justice too?” said Holtville resident Manuel Garcia as he walked to his car after leaving the credit union.

Daniels has been convicted of bank robbery in federal court before, pleading guilty in United States District Court Southern District of California on Nov. 1, 2012, to bank robbery, assault with a dangerous weapon while committing that act, and brandishing firearm. It appears Daniels was sentenced to more than 11 years in prison with several years of supervised release, according to documents.

The only correspondence this newspaper has had concerning Daniels’ involvement with the Holtville crime came back on Jan. 5, when the local FBI was asked about Daniels’ connection to the Sun Community heist.

“Mr. Daniels’ potential involvement in any other crimes is part of our ongoing investigation,” according to a statement from the FBI’s San Diego office sent to this newspaper Wednesday evening. “At this time, no one has been charged with Monday’s robbery in Holtville.”

“Based on this individual’s appearance, clothing, and method of operation, I believe the bank robber at Sun Community Federal Credit Union (in Holtville) to be Daniels,” according to Agent Chappell in a probable cause statement.

The Holtville robbery, which was known to have occurred around 11 a.m. Jan. 3, saw Daniels allegedly walk into Sun Community and tell a teller he was “robbing the place,” Chappell states, as Daniels reportedly pointed to the vault and told the employee to “give me that.” Unable to open the vault, tellers cleaned out the money from their drawers and Daniels allegedly left (on foot) with $20,545.

On Jan. 4, Daniels was arrested by La Mesa police officers shortly after a brief foot pursuit following the heist there, according to a press release from the La Mesa Police Department.

Daniels allegedly pretended to have a concealed gun while demanding money from several tellers at the Bank of the West’s La Mesa branch about 10 a.m., according to La Mesa police.

It wasn’t stated anywhere whether Daniels claimed to have a firearm in the Sun Community heist.

Sun Community officials announced the robbery and a short branch closure on the credit union’s Facebook page not long after the crime was committed: “Thankfully, no one was physically harmed during this incident. The police and FBI have been notified and the proper steps are being taken.”

Daniels was being held in San Diego jail on $100,000 bail. It appears that ma have been changed to a no-bail hold for fear of him being a flight risk, according to  notations in the federal documents put online after the arraignment on Jan. 6.

A jail photo of Daniels has not been available. A spokesperson for the San Diego County Sheriff’s Office where he was being held said it is standard procedure not to release mug shots to the media.