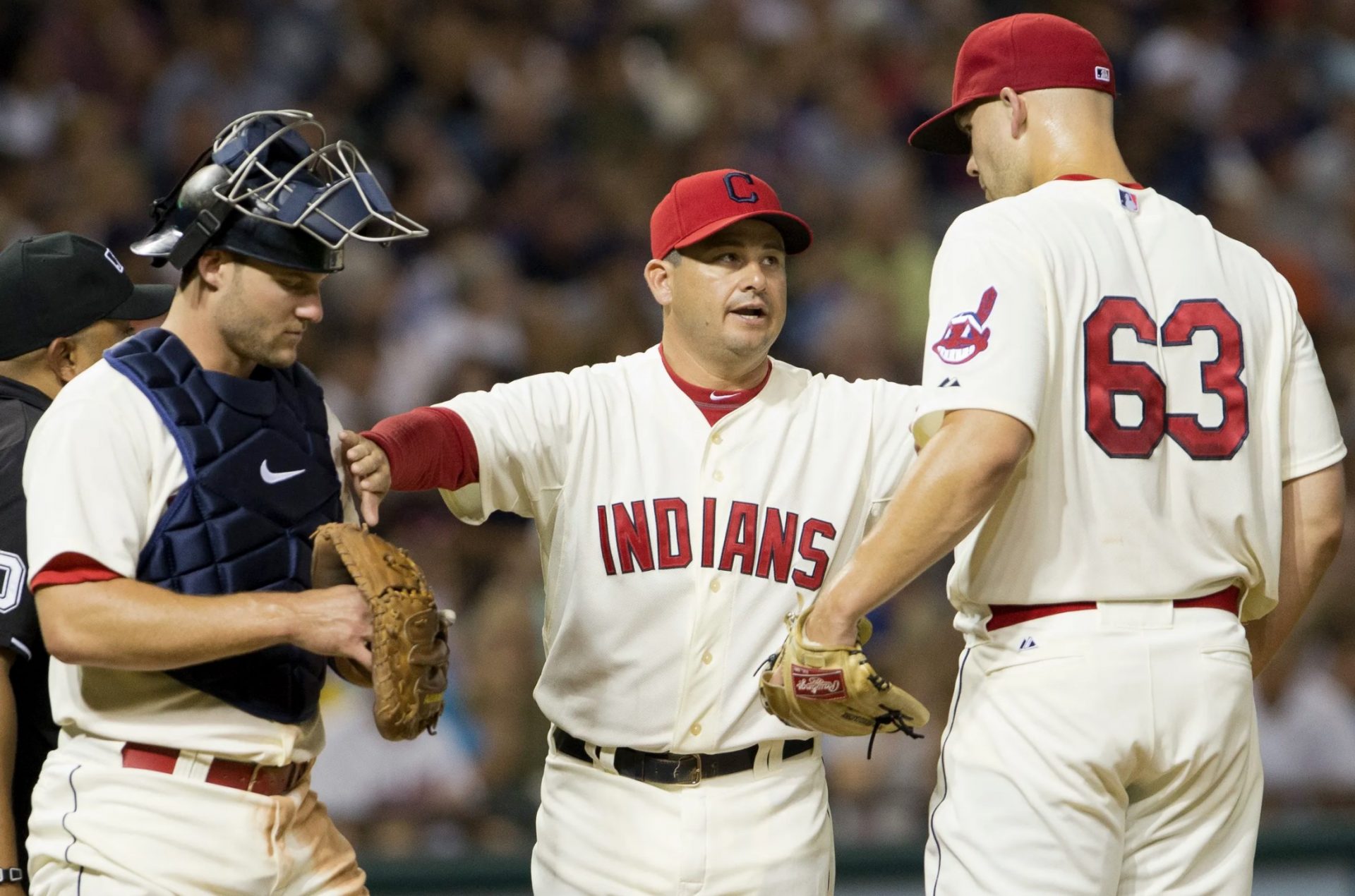 El Centro resident and Calexico native Ruben Niebla, as a pitching coach for the Cleveland Indians, confers with players at the mound. In October, Niebla was hired away from the Indians organization after 21 years to coach with the San Diego Padres. | GETTY IMAGES
In Featured StoriesSports

WHERE ARE THEY NOW? Ruben Niebla in Charge of Padres’ Pitching Staff

SAN DIEGO — From the Little League baseball fields of Calexico to Petco Park in “America’s Finest City,” Ruben Niebla has seen and experienced just about everything in the sport.

The 1990 Calexico High graduate did serve as the MLB team’s interim pitching coach for the final two months of the 2012 season. After that he was the minor league pitching coordinator for the organization from 2013 through 2019, in charge of developing young pitchers from the rookie league to the triple-A level.

“In Cleveland we were called arguably the most successful pitching development organization in baseball,” Niebla said. “I was lucky to be the head of that group of guys.”

Now, Niebla is hoping to bring some of that magic to the Padres’ organization, a group that has struggled in recent years to keep pitchers healthy. He said one of his first tasks after getting the job in San Diego was to research why the rash of injuries was happening to Padres’ pitchers.

“The first thing I wanted to find out was what type of communication was going on between the strength and conditioning guys, the medical team and the pitching coaches,” Niebla said. “It’s my job to bring all these guys together. We’re all working toward the same goal to have the guys on the field and in the best condition to produce at the best of their ability.”

When he was told in Cleveland that the Padres were calling to request an interview, Niebla knew he had a good chance at “coming home.” Now, his office is less than two hours from the family home in El Centro, much closer than the 1,900 miles away that Cleveland sits.

“I knew I had a good reputation among the industry, and I knew there had been a lot of trades between the organizations,” Niebla said. “There were some successes that happened with some of the guys that went over there from San Diego, and I was a part of that.

“It couldn’t have been a better situation for me and the family. The ownership and leadership in San Diego are awesome. They make no secret that they want to win.”

Niebla’s baseball journey started in Calexico as a youth player, then to the baseball field at Calexico High School, where he played for Elmer Belcher and Jim Bartow. As a senior in 1990, Niebla had enormous success for the Bulldogs and earned himself a scholarship to Azusa Pacific University in the Los Angeles area.

“You always remember the high school bus rides and just being with the team,” Niebla said. “I also remember the practices because that was the time you knew you were going to learn something and get better.”

From Azusa, Niebla participated in an independent baseball league before signing as a free agent with the Montreal Expos’ organization. The right-handed pitcher would play for the Expos and Los Angeles Dodgers’ organization, making it as high as triple-A with both clubs.

In 2001 he gave up the dreams of playing in the big leagues and went into coaching, getting his first opportunity in Columbus, Ga., with the Indians’ low single-A squad.

“Persistence was so key for me. Everyone as a kid plays baseball but it’s who is willing to go to the extreme,” Niebla said. “I wanted to get out of high school and go play in college. It took a lot of work and I hit some speed bumps along the way, but the key was not giving up.”

That persistency is what kept him in the Indians’ organization for 21 years, coaching on every level of the minor leagues.

Now, Niebla finds himself in new, yet familiar, territory in San Diego.

His 19-year-old daughter, Jaelyn, is a freshman at San Diego State University in San Diego, while his son, 14-year-old Johrden, is an eighth-grader at Corfman Middle School outside of El Centro.

His wife, Stephanie, is a physical education teacher and softball coach at Southwest High School in El Centro.

“I’m coaching as close as I can get to home and the team I’m coaching is, at least on paper, a championship-caliber team,” Niebla said. “Everyone talks about the Dodgers, but honestly I think we have the better team on paper. It’s now our job to go put that in play.”

WHAT OTHERS SAY ABOUT RUBEN NIEBLA