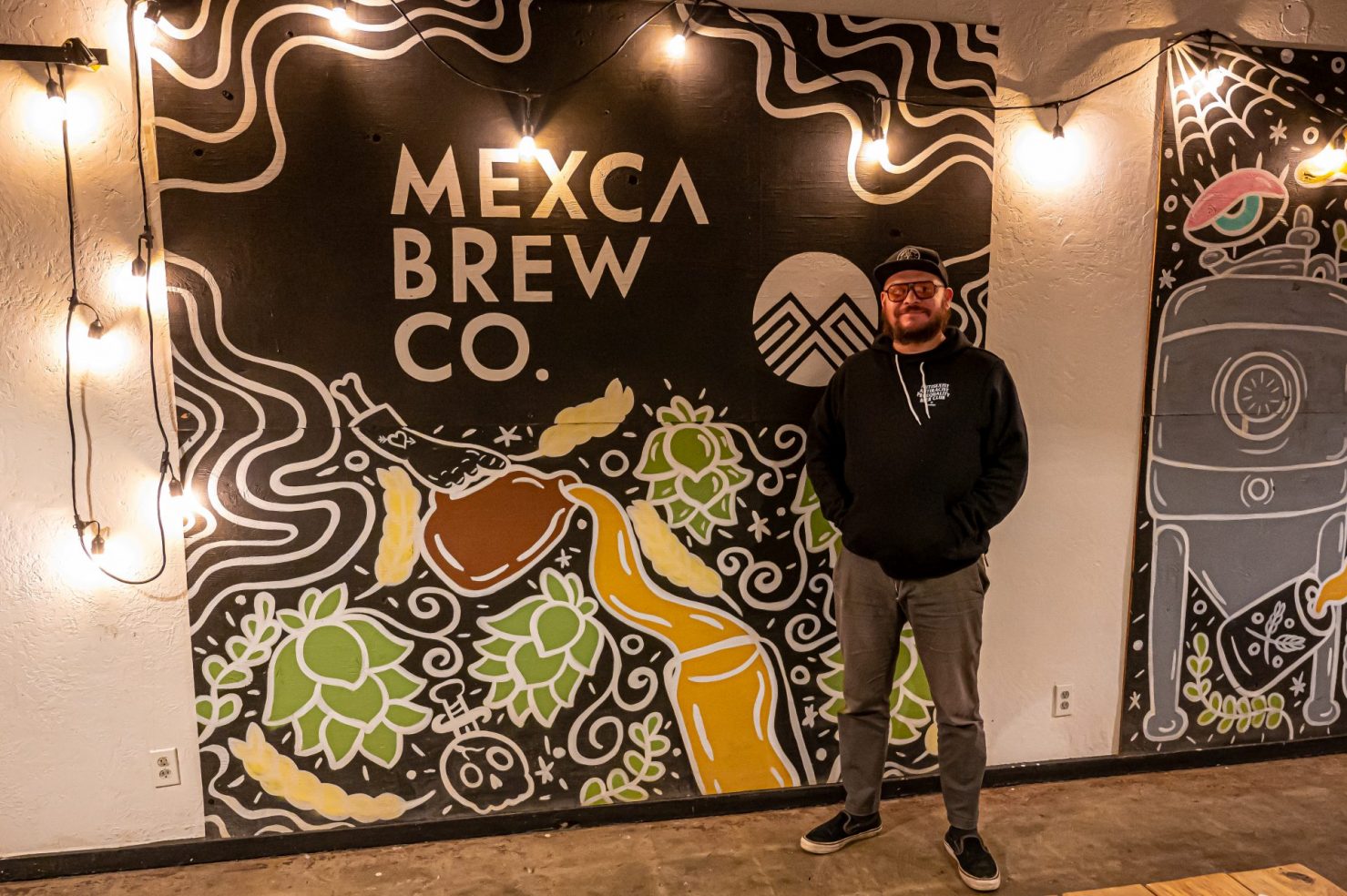 Creativity, Perseverance are Tricks of the Trade for Local Brewer

He wears band shirts instead of suits, talks about road trips instead of profit-and-loss statements, and works with his competitors instead of trying to put them out of business.

It works for him.

Quintero has managed to do what life coaches and social media influencers preach to the masses: turn his passions and hobbies into thriving businesses. His most recent venture, Mexca Brew Co., is a case in point.

The restaurant and craft beer brewery on Main Street in El Centro combines Quintero’s love of beer and good food, and allows him and his life partner, Jessica Delgado, to work closely with the community.

Quintero had plenty of opportunities to leave the Imperial Valley for cooler locations. He chose to stay in the Valley and build cool projects. Those projects eventually helped fuel downtown El Centro’s youth resurgence.

“Growing up here, a lot of people want to get the hell out of here because there isn’t much. I felt that, too,” Quintero said. “It wasn’t until I got out of the country, to Europe, that I realized how good we have it here. There’s parts of the U.S. where the weather is even worse. Europe has amazing food, but I missed Mexican food. Being that far away from Mexico sucked.”

Quintero has built three businesses and influenced countless people since moving back to the Valley. How he did so is a lesson in creativity, perseverance and community-building, whose seeds were planted as a young skateboarder in his hometown and germinated on the road with musicians.

Quintero grew up skateboarding in Imperial, long before the area had any skateparks. He had a choice: He could quit skating or find a way to make it work. Quintero did the latter. He built a ramp in his mother’s backyard and invited his friends over.

“Ernie’s spot was the base,” said Daniel Hughes, a longtime friend, musician, and proprietor of Saltcedar Barbecue. “There wasn’t anywhere to go, no skatepark. He had the ramp. He was always welcoming. His mom worked nights and we would hang out and drink and party.”

That do-it-yourself spirit served Quintero very well years later, as the road manager for indie bands The Spits and The Black Lips as they toured the United States and Europe. Money was tight on the road and making it to the next gig on time wasn’t guaranteed. But things worked out and they made lots of friends in the process.

“It’s always a dream of a skater to open a skate shop,” Quintero said. “When I had the chance to do it, I did it. And that turned into the opportunity of the bar.”

Cheap Tricks was initially located on Broadway in El Centro. Again, money was tight, and Quintero lived in the back of the shop to keep expenses as low as possible. The building he was in suffered extensive damage in the 2010 Easter earthquake, and he was forced to relocate the shop.

“Our building was already crooked, and after the earthquake the building got red-tagged,” Quintero said.

Some friends of his, the Zavala brothers of Bujwah and Strangers and Co. fame (among other businesses), were working to open a bar in El Centro, and they asked Quintero if he wanted to move his skate shop into the bar’s premises during the planning and permitting process.

Plans for the Bujwah bar fell through, and the Zavala brothers moved on with other projects. Quintero picked up the ball and pushed forward with a bar in that location.

Quintero opened the doors of Strangers Bar in 2012 and went all in on craft beer. Heineken, Corona and Budweiser drinkers were out of luck.

“At that time no one was doing that,” Hughes said. “His bar was the first place I tasted IPAs (India pale ales). He was giving people something that people did not have. Now you go to any bar, and you can order a craft brew, an IPA, a sour.”

Strangers’ playlist was equally unusual. If you liked psychedelic rock, garage jams or other strange sounds from the underground, Strangers was your place. Quintero had a knack for booking great bands you’d never heard of, or bands you loved but had no hope of seeing in the Imperial Valley.

“We’ve always been a pass-through city,” Hughes said. “A lot of bands would normally pass through on their way to Phoenix, but thanks to Ernie they would stop in and play. He definitely gave us the opportunity to see some great bands, and for us to play with those bands.”

“The idea of the bar was to be a music and arts venue, that was the game plan from the beginning,” Quintero said. “I wanted it to be like venues I’d seen across the country and in Europe.”

That little bar quickly became a venue for the Valley’s artists. Quintero hosted book launches, movie screenings and art exhibitions. Local metal musicians and rappers had a space to play.

He obtained his cicerone certification, which gave him a thorough understanding of the history of beer and the various styles available. He learned how to pair beer with food, and how to recommend beer for drinkers who think they don’t like beer.

Another event soon gave Quintero a push to his next project: Nights on Main Street, a showcase for Valley artists and entrepreneurs held in El Centro’s historic downtown in December 2015.

“That was such a cool and fun thing to do. After seeing that Main Street action, I wanted to be closer,” Quintero recalled.

He and Delgado began looking for ways to expand and get closer to the action. Although it was doing well, Strangers Bar was small.

“We looked around to see if anything is available for rent,” Quintero said. “La Bella (Pizzeria) was going to be available. Some people that were behind it asked us if we were interested.”

Strangers West opened in 2016 in La Bella’s former location. The restaurant was intended to be an extension of Strangers Bar. Business was good, Quintero said, but it was always intended to be a brewery as well. It took another four years to get there.

“Between the two locations we were going nowhere saving up money for brewing equipment,” Quintero said. “A friend that we met at the restaurant invested some money, and that got us going.”

Quintero and Delgado were forced to close the bar and their restaurant’s dining room and rethink their business when the pandemic hit. They shifted from restaurant only to online orders and curbside pickup.

Quintero used the downtime to learn how to brew beer and to apply for county and state business grants.

“During COVID I jumped on everything that was available, everything that we qualified for,” Quintero said. “The paperwork process is not so bad, and I like that when I submit applications, they compliment me.”

“Beer is moving fast, I’m having to keep up with demand, the beers are coming out good,” he said.

Quintero credits much of his success to his roots as a skateboarder, where, you had to learn to do it yourself.

“I feel like I’m the furthest thing from a business man. I am a skater first and foremost. I look at everything from the eye of a skater,” he said. “You have your own creativity to build your own skate spot, ramps, making your own skateboard, your own clothing, and also not having a lot of money.

“So coming into a situation, (I ask) how could I do this as creatively as possible without blowing a whole lot of money?” he said.

Quintero has some advice for readers contemplating their own gig.